If you ever wanted to see a wartime movie that feels directed by a kinder, gentler Michael Bay, “Come What May” is right up your alley. It plays like a more cultured—and very French—version of “Pearl Harbor," complete with bad CGI battle sequences, jaw-dropping plot coincidences, over-the-top nationalistic gestures and dialogue that often sounds swiped from a soap opera. Had someone stuck a croissant, or perhaps a Vienna sausage, into the belly button of the film’s ingénue, Miss Suzanne (Alice Isaaz), in homage to Ben Affleck’s roaming animal cracker in Bay’s 2001 film "Armageddon," I might have had to rethink my rating. There’s even a maniacal movie director (hint, hint!) who’ll do anything to get staged footage for his WWII German propaganda film, including shooting people to get reactions from his actors. And then there’s the duck.

More on the bird later. As with “Pearl Harbor," I can see “Come What May” going over like gangbusters for its intended audience, while also earning intense “oh, come ON now!”-style eye-rolling from everyone else. I curiously find myself between both factions here, as I’ve an admitted soft spot for the kind of old-school Hollywood studio system schmaltz that thickly coats this movie. Much like those old dramatic features of yore (and Bay's WWII disaster) you get the sense that this film doesn’t want to be that much of a downer, despite the story’s propensity to travel that route. I admit I can be persuaded to succumb to the medicine going down with one too many spoonfuls of sugar in it.

But director Christian Carion and his fellow screenwriters Andrew Bampfield and Laure Irrmann ask way too much of one’s suspension of belief, boldly kicking in the shins of any intermittent goodwill I felt toward the film. This is the occasional outcome of films of personal tribute such as this, a film dedicated to the director’s mother. She made the same journey his characters do, and while truth is often stranger than fiction, I doubt if the truth were as strange as this. Nor would it have been accompanied by a pretty Ennio Morricone score that expertly wields a lament-filled melody.

A title card informs us that “the German offensive of May 10, 1940 drove almost 8 million people from their homes [in France], one of the largest displacements of people in the 20th century.” Carion bookends the film with actual footage of these people leaving their homes. Not once does the recreated footage in “Come What May” come close to the power of these brief images; mere seconds of the documentary footage have a compelling realism that lingers longer than anything in the 117 minutes I spent with the fictional characters.

In fact, the most interesting character in “Come What May” isn’t even a part of this group. He’s a Scottish officer named Percy (Matthew Rhys), whose entire troop was wiped out by German gunfire moments before we meet him. Rhys gives the film’s best performance, expertly working the one-dimensional nature the film gives all its characters. Rhys brings the same type of charm Errol Flynn might have brought had this film been made on the Warner Brothers lot instead of in the gorgeous landscapes of France. His last scene even takes place inside a movie camera, a meta-style exit that’s a perfect end to his performance.

Before we meet Percy, we’re introduced to Hans (August Diehl), a German hiding from the Nazis with his son, Max (Jushio Marlon) in a town outside Arras, France. “Come What May” spends most of its time with these two, who are separated when Hans is imprisoned after France declares war on the encroaching Germans. Hans eventually winds up on the road with Percy, while Max takes the displacement journey with the aforementioned Miss Suzanne, a French teacher who becomes extremely maternal toward him. If you’re thinking there’s an outside chance a makeshift family could result with Max, Hans and Miss Suzanne, you’re on the same wavelength as this movie. You just have no idea how absurdly far the narrative will twist to get to this possibility.

Though primarily concerned with a heightened style of French patriotism (one character is so enamored of his French wine that he refuses to leave his home despite the enemy bearing down on him), “Come What May” also gives a chunk of country pride of its Scottish officer and, in the film’s most intriguing scene, a bit of sympathy for the enemy courtesy of an injured German soldier. Large portions of the film are in English, which I suppose was meant to add a bit more universal appeal to the proceedings.

Most of “Come What May” involves the characters walking for miles and miles in their caravan. Occasionally, the film attempts to goose us with badly rendered scenes of CGI carnage raining down from above, courtesy of the sinister German planes that announce themselves on the soundtrack with effectively loud engine roars that shake the speakers. They sound great, but they’re not integrated into the scenes very well. Additionally, they do far less carnage to the main characters than they should, keeping this film from slipping into the darkness it needs more of to dramatically succeed.

It’s during the first appearance of these planes that we’re introduced to that duck I mentioned a few paragraphs ago. As the planes appear on the soundtrack, Carion cuts to several characters looking up to see them before we do. The mayor looks up. Then his wife looks up. Then Miss Suzanne looks up. And then, this random duck in a bag looks up. It’s the damndest thing, perhaps the oddest animal reaction shot I’ve seen in a movie, and if it were the only occurrence of this creature, I wouldn’t even mention it. But not only does the duck get several more reaction shots later, it gets a food-eating scene and, in the killer director’s propaganda film, a black and white close-up that would make Lillian Gish green with envy. I don’t know who’s repping that duck, but their client sure got its money’s worth. You might get your money’s worth too, if you’re willing to forgive a lot in favor of feeling good. 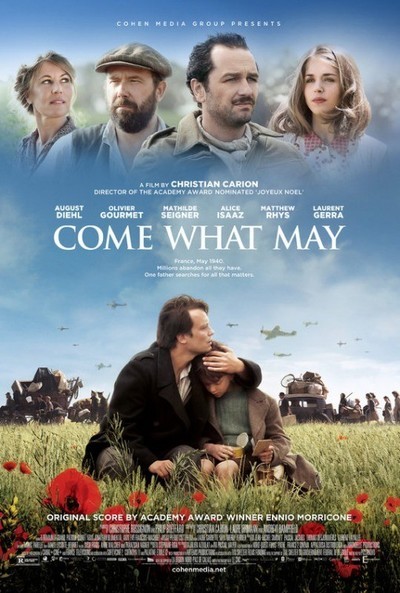