The opening scene of this fact-based drama is set on an airplane about to fly to Tulsa. A lawyer, apparently a stressed-out one, given the way she speaks on her cell phone, takes a seat next to a man who soon introduces himself as a pastor. The lawyer, never named but well-played by Allie McCulloch, seems likely to rebuff Carlton Pearson. But he is so empathetic, so charismatic, that before the end of the flight he has her more or less saved.

“Come Sunday,” directed by Joshua Marston from a script by Marcus Hinchey, then cuts to a sermon at the reverend’s Tulsa church, called Higher Dimensions. He’s talking about his encounter and he’s getting a great response from his mega-congregation, including his pal Henry (Jason Segel) a manager of the venue. Organist Reggie (Lakeith Stanfield) is clearly feeling the spirit, too. In the subsequent scenes we get little glimpses into how such places of worship are run like businesses, with religious holidays packaged like rock concerts, and more.

Things look good for the Rev. But he soon finds himself rebuffing a relative who’s asked him to use his influence with a parole situation. The relative takes the rebuff very badly—he kills himself. Later, Pearson is watching television footage of starving children in Africa. His mind takes him to a place that philosophers call theodicy—the questioning of how a supposedly loving God can allow such suffering in the world. Pearson’s a bit more concerned with the afterworld, though. He can’t bear the idea of suffering people who haven’t been “saved” through his gospel going to Hell.

So he concludes—or, he insists, he is told by God—that Hell isn’t real. And he announces his findings in a sermon. So his troubles begin.

This movie is adapted from a 2005 “This American Life” episode called “Heretics,” which told Pearson’s story. This movie is distinguished by some powerful performance. Chiwetel Ejiofor is both dynamic and credibly contemplative as Pearson. Lakeith Stanfield plays Reggie, a character who’s HIV-positive, and consistently encouraged by Pearson to deny who he is: “You can be gay and not do gay,” the preacher advises, after he’s had his epiphany. Stanfield’s work provides the movie’s most resonant emotional notes. Condola Rashad is excellent as Pearson’s conflicted wife, and Martin Sheen and Danny Glover provide superb support. Segel’s Henry, who breaks off a splinter church after Pearson persists in his “heresy,” is underwritten, but the actor soldiers through the role with integrity.

The movie itself, overall, feels kind of bloodless. Scenes in which Pearson is called upon to defend his new vision kind of fizzle rather than catch fire. The collapse of his church is depicted in undifferentiated scenes that pack no punch. Pearson’s spiritual and practically adoptive father Oral Roberts rebuffs his acolyte in the quietest, politest way possible. It’s only at the end, when Pearson and Reggie have a moving confrontation, and Pearson’s epiphany is shown to have a political dimension, that the movie shows signs of digging in its heels. Up until that point, well-acted and “interesting” is all it can offer. 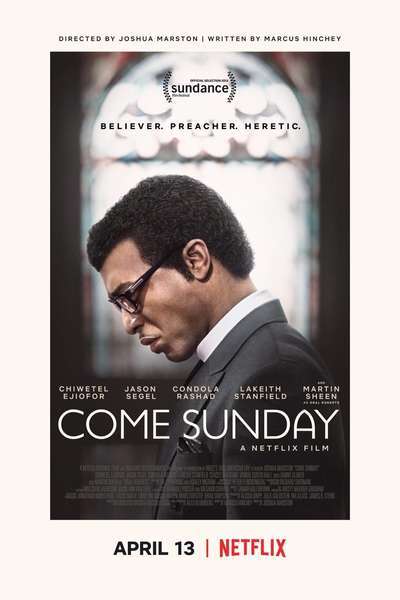