“Come Play” uses isolated childhood to spin a traditional ghost story around concerns about bullying and even the abundance of screen time for our current youngest generation. There's ambition in the concept that elevates Jacob Chase’s film above what it could have been, but a lot of the best elements of “Come Play” feel underdeveloped, and the film is ultimately far more frustrating than it should have been. With the exception of a few strong sequences in the scare department, it’s an inconsistent, flat film that is too often reliant on jump scares instead of atmosphere. "Come Play" is unwilling to really dig into its darkest ideas about how parents can otherize their own children through overprotection and lack of understanding.

Oliver (Azhy Robertson, the son from “Marriage Story”) is an autistic, non-verbal child who communicates almost entirely through his smart devices. His phone has an app that he uses to choose words to express himself, and he spends most of his time watching “Spongebob Squarepants.” His parents Sarah (Gillian Jacobs) and Marty (John Gallagher Jr.) are splitting up, and the stress of that is seeping into Oliver’s life, making him feel even more alone. It doesn’t help that he’s being bullied in school and struggling in his individualized therapy sessions. Sarah seems to be stressed out by his lack of development as well, noting to Marty that her own son has never even looked her in the eyes.

From the opening scene of the film, something seems to be hunting Oliver. POV shots that appear to be inside Oliver’s phone make it clear that “Come Play” is at least in part a cautionary tale about technology. If we leave our kids too attached to screens, those screens will become their only friend. (Don’t worry, parents. All the rules are different in 2020. Or so I tell myself.) Oliver’s phone seems to be possessed by an app that keeps showing a terrifying children’s story about a creature named Larry that just wants to be your friend. At first, Larry can only be seen through technology like phones or tablets—he’s an AR ghost—but he becomes more and more threatening to the real world, his arrivals foreshadowed by him sucking power from the world around him, including popping most of the lightbulbs in Oliver and Sarah’s home.

There are strong sequences in the first half of “Come Play,” especially at Marty’s night job as a parking lot attendant, but the film starts to struggle due to a lack of real stakes. Oliver sees things he can’t explain or even communicate about, and yet it’s a strange ghost story in that there’s never a genuine sense of danger. Yes, the images of Larry aren’t soft and cuddly, but it’s difficult to make a movie like this work when there’s no real sense of what’s at stake. It becomes clearer that Larry doesn’t just want a friend, finally making him more of a threat, but it takes “Come Play” too long to show its teeth. An excellent sequence involving a sleepover wherein Oliver’s friends discover the existence of Larry the hard way is indicative of what “Come Play” needed more of throughout.

This film comes to life in its set pieces, but then sinks back into mediocrity when they’re done. It doesn’t help that most of the performances don’t resonate. Jacobs struggles to act genuine against something that’s not really there—it’s harder to make an invisible threat feel urgent than it looks—and Robertson has a tough time making Oliver three-dimensional, although that’s a fault of script and direction that feels like it’s more interested in him as a plot device than a real kid. Ultimately, I couldn’t shake the feeling that Oliver was about as real as Larry, a creation on a screen meant to symbolize something more than feeling like a living, breathing, scared kid.

Our national addiction to screen time is going to be a major topic for filmmakers in the next decade. “Come Play” should be a reminder that the idea isn’t enough; the execution matters most of all. And that even if a horror film is about supernatural tech, it’s the characters caught up in the nightmare that need to resonate. Otherwise, it’s all as superficial as the apps from which we can’t look away. 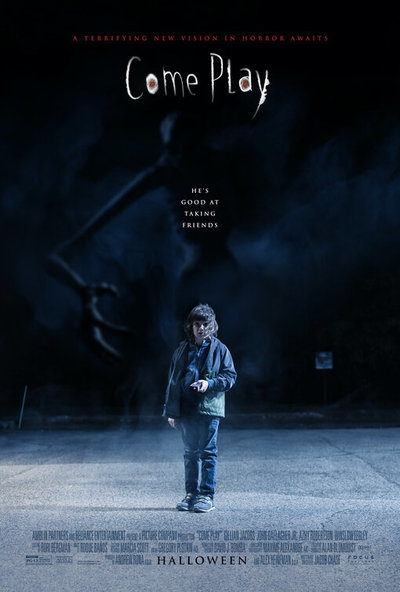 Rated PG-13 for terror, frightening images and some language.