In 2016, San Francisco 49ers quarterback Colin Kaepernick began kneeling during the U.S. national anthem to protest racial injustice, a small act that sparked one of the biggest sports controversies in history. While Kaepernick’s message has gone mainstream in the years since, his stance at the time effectively ended his NFL career. “Colin in Black & White,” the new six-part autobiographical limited series co-created by Kaepernick and Ava DuVernay with Michael Starrbury serving as showrunner, assumes you know all this. The conclusion of Kaepernick’s football career fundamentally underlies the series, but is not specifically addressed in a way that feels quite intentional—we all know how the story ends, but Kaepernick, who also narrates the series, wants to set the record straight about where all this started—because it certainly was not in 2016.

The keyword for this series is “context.” Kaepernick, who has been more argued over than listened to, clearly relishes having the mic here—the first episode opens on his face in a tight closeup as he directly addresses the viewer. The subject of discussion? The toxic power dynamics of pro football tryouts, complete with the dehumanizing treatment of prospective players being compared to the experience of enslaved men on the auction block. It is not subtle; it is not trying to subliminally nudge viewers—this series is here to educate, and class is in session. “Some people will say the system is broken,” Kaepernick says at one point, when discussing systemic racism, “I’m here to tell you it was intentionally built this way.” He is not pulling his punches. It feels deeply unlikely that any of the critics who were up in arms about his kneeling protests will be watching this series, but one imagines that if they did they might spontaneously combust in a ball of rage.

Focusing on Kaepernick’s high school years as he comes into his own as both a multi-talented athlete and his identity as a young, biracial Black man being raised by two white adoptive parents, “Colin in Black & White” puts Kaepernick’s more recent rise to prominence as an activist in the context of a lifetime of defying expectations and challenging status quos. The series goes the extra mile of further putting Kaepernick’s activism in context not just within his life, but in the wider sociopolitical, ideological context of U.S. history. Allen Iverson, Kenneth and Mamie Clark’s famous “Doll Test” made famous by the role it played in the Brown v. Board of Education case, and “father of hip-hop” Clive Campbell, aka DJ Kool Herc, are among the many historical touchstones woven into the series.

At its best, “Colin in Black & White” feels a bit like the sports equivalent of what philosopher Slavoj Žižek did for movies with the “Pervert’s Guide” documentaries in which he scrutinized the ideological underpinnings of iconic films through staged re-enactments, only more widely accessible and personal in the telling. At its lower points, the series is somewhat less than that, more after-school special-ish, with a tendency towards heavy-handed dialogue and truisms that feel about as fresh as something served straight from a can. Jaden Michael carries the weight of the series as young Colin and does a truly excellent job bringing energy and vitality to even the most heavy-handed scenes that could have easily turned rather painful with a less capable lead. Kaepernick himself has many talents, but based on his performance as narrator here—often on screen, directly addressing the camera as he guides viewers through his adolescence and pauses for historical detours—acting is not his strongest suit; his delivery is earnest but a bit one-note at times. While Kaepernick has been known to sport all-black outfits before and considering the messaging of the series an all-black look makes perfect sense, the black trench coat does make him looks a smidge like he stopped by on his way to audition for the upcoming “Matrix” sequel.

The series is so zeroed in on Colin’s internal conflicts and personal growth that relationships between characters can feel somewhat neglected, with much of the supporting cast often feeling more like plot devices than people. That being said, although many of Colin’s relationships, particularly with his school peers and his coaches, really feel like they could have been rendered with a bit more texture and subtlety, the series does demonstrate a capacity for nuance where it matters most—namely, Colin’s relationship with his parents, Rick and Teresa (Nick Offerman and Mary-Louise Parker).

While young Colin has the drive to cram his schedule full of every football training camp and showcase in a 50-mile radius, his accomplishments also necessitate parents committed enough to ferry him to and from all of these programs at all hours of the day and night, and this series sidesteps a common pitfall of underdog “fight the system” narratives by addressing his support system and how crucial it is to his success. That being said, Teresa and Rick also remain willfully blind to their own racism and the impact it has on their Black son, from the impact of them fretting over his cornrows making him look like a “thug” to their obvious discomfort the few times they venture into predominantly Black spaces. Both their virtues and shortcomings as parents are explored and treated as equally significant; neither aspect negates the other.

“Colin in Black & White” serves as an excellent primer on the personal as political. The episodes that demonstrate the greatest aptitude for putting Kaepernick’s story in the wider historical context are the most compelling of the series, and the inverse is also true—those episodes that don’t do quite as effective a job at connecting Colin’s tale to wider historical, sociopolitical contexts are the weaker links. The storyline zeroing in on one of the more unique elements of Kaepernick’s athletic career—while he excelled as a high school quarterback, he was an absolute star in baseball and highly sought out by college coaches, but retained a single-minded focus on pursuing football—is one of the less compelling stretches of the series for this very reason. Elsewhere, the intricate layers of context given are the most distinctive and compelling parts of the show, but this crucial chapter in Colin’s life feels weirdly unexplored. While his ultimate disinterest in pursuing baseball in spite of his incredible talents is discussed at some length, the other side of the coin—his all-consuming love of football—is strangely untapped. Particularly towards the latter half of the series, when Colin’s singular focus on football comes to the fore, this quirk becomes especially noticeable. The show focuses on Colin’s fortitude and determination to prove his naysayers wrong, which speaks to how he maintained focus on his own aspirations in spite of significant external pressure, but does not really speak to what drives his actual aspirations.

Still, while the execution is mixed, the aims of the series are so clear and admirable that it goes a long way. “Colin in Black & White” is unabashed edutainment. For those not fond of the genre, do not expect to be surprised, but for those willing to give it a chance, this is an above-average example of the trend. In one episode, Kaepernick makes a comment that feels like the underlying thesis of the series. “I couldn’t rebel because I didn’t know how,” he says of the discontents of his youth, “but now, now I know how, and I will.”

“Colin in Black & White” premieres on Netflix on October 29, 2021. All six episodes were screened for review. 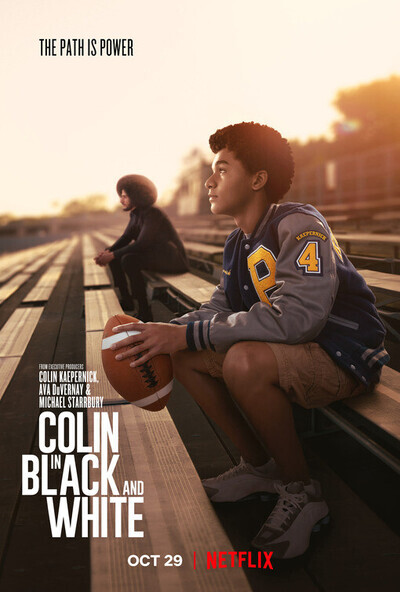