Perseverance has characterized the career of filmmaker Emily Hagins ever since she helmed her first feature at age 12. Aided by her supportive parents and the creative community of Austin, Hagins was able to realize her dream several years before many of her peers attended their first day of film school. Her remarkable first foray into directing was chronicled in the delightful 2009 documentary, “Zombie Girl: The Movie,” which unfortunately resulted in her being viewed as more of an endearing curiosity than an artist to be taken seriously. Her third feature, 2011’s vampire satire “My Sucky Teen Romance,” is far from flawless, but it is also infinitely preferable to any of the “Twilight” pictures, and includes a hilarious scene with critic Harry Knowles that drives a stake through the entire franchise. Unlike most filmmakers who strain to recall their memories of youth when tackling a coming-of-age yarn, Hagins was a teenager when she made “My Sucky Teen Romance,” thus allowing her to portray life precisely as she observed it in the present tense. I can’t recall another vampire film that depicted so amusingly the sheer awkwardness of adjusting to one’s fangs, as if they were yet another pitfall of puberty.

What makes Hagins a singular talent is not just the freshness of her perspective, but its wholehearted earnestness. She is entirely uninterested in utilizing the sort of edgy tropes designed to boost the hipness factor for teen movies, and that is partly because there isn’t a mean-spirited bone in her body. A glimpse at the premise for her fifth feature, “Coin Heist” (available now on Netflix) would suggest that it were a mere retread of “The Breakfast Club.” Elisa Ludwig’s book, upon which the film was based, even had an ad labeling its four teenage protagonists as The Perfect Student, The Slacker, etc. One of the finest achievements of Hagins’ adaptation is that none of her main characters can be defined by a reductive label. They are weary of the stereotypes that befall kids like them in most high school movies, very few of which seem to understand the insecurity that fuels so much adolescent behavior. Rather than deliver snappy one-liners with the verbal dexterity of sitcom veterans, these kids often talk in a flat affect while fumbling for the right words. This approach could threaten to become bland in the hands of a less skilled filmmaker, but Hagins—now twice the age she was when she made her debut—keeps her audience engaged by making each scene ring true.

It’s amusing to simply observe the boredom exuded by a class of teens from a Philadelphia prep school when they are forced to take a field trip to the U.S. Mint (“Do they make credit cards here?” one kid asks). Excitement finally pervades the ennui when the principal is taken away by police, arrested on charges of embezzling $10 million from the school’s endowment. This sudden twist jolts the sleepy-eyed demeanor of the principal’s son, Jason, played by Alex Saxon as a soft-spoken loner not at all pleased with his Spicoli-esque reputation. He earns the empathy of Alice (Alexis G. Zall), an expert hacker who hatches a plan to steal from the U.S. Mint in order to save the school. Jason’s ex, Dakota (Sasha Pieterse of “Pretty Little Liars” fame), wouldn’t normally associate herself with illegal schemes, but now that the school’s debt has resulted in the cancellation of all extracurricular activities and the relegation of the Winter Formal to the cafeteria, she eagerly joins the pair in planning the heist. Rounding out the foursome is Benny (Jay Walker), who once applied his skill at manufacturing IDs to help illegal immigrants. Though the elaborate undertaking would make even the "Ocean's Eleven" crew balk at its difficulty, Hagins maintains a suspension of our disbelief for much of the film’s running time, while building palpable thrills in some nail-biting set-pieces, particularly during the second half.

The film’s believability is strengthened, first and foremost, by the terrific young actors, two of whom are clearly poised for stardom far beyond the realm of online celebrity. Viewers who know Walker from the uproarious sketch comedy in his Vine videos will be stunned by the restraint and textured nuance of his work here. When Benny learns that his promised scholarship has been discontinued due to lack of funds, the look of disillusionment on Walker’s face is just heartbreaking. It is an excellent performance, as is the one delivered by Zall, embodying the essence of what has become the signature, semi-autobiographical Hagins heroine: a sensitive, sweetly nerdy soul with a limitless reservoir of resourcefulness. It’s no surprise that Zall is effortlessly natural in front of the camera, considering that she achieved popularity with her charming YouTube series devoted to demystifying the strangeness of everyday life, from weird foods to crowded film sets. Yet whereas her exuberant Internet persona is reminiscent of Ellen Page’s Juno, Zall’s portrayal of Alice is more evocative of Jena Malone in its understated vulnerability.

“Coin Heist” should finally put to rest any nagging perceptions of Hagins as the little zombie girl armed with a camera and a gallon of fake blood. She is the real deal, and deserves to not have her work graded on a patronizing curve. The most appealing thing about her latest film is its sense of indignation aimed at adults who have cheated the system while expecting others to follow the rules. Why should kids be expected to behave when the people running their school have set a corrupt precedent? Why should impoverished students be denied scholarships while administrators continue raking in the dough? How can bullying be punished when it played a crucial role in electing our future president? When a system has become rotten to the core, cheating it may be the only way to change it. 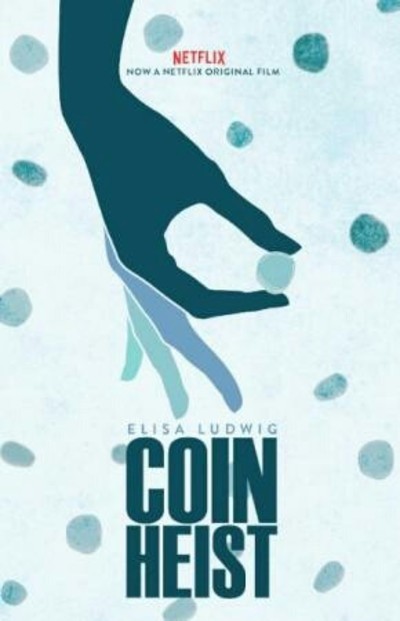