Let’s set one thing straight: “Stuber” was a good movie. Yes, the title for that 2019 action-comedy with Kumail Nanjiani and Dave Bautista was silly, but that was part of its self-deprecating approach to cop comedies and knowing product placement. With its slapstick-y action sequences and potently mismatched duo, “Stuber” proved that these movies can have some juice, even if they’ve felt ironic for at least a decade. “Coffee & Kareem,” also from director Michael Dowse, is on the other hand also about dopey men in action sequences, but its cleverness goes out the window once you realize most of its edginess comes in the form of a 12-year-old's way with cuss words. "Coffee & Kareem" is stock R-rated buddy-cop comedy shenanigans by way of cuteness, and it ain't "Stuber."

Written by Shane Mack, “Coffee & Kareem” pairs up a dopey cop named Coffee (Ed Helms) and a 12-year-old wise-cracking kid named Kareem (Terrence Little Gardenhigh). Kareem acts like a wannabe comedy superstar stuffed into a preteen's body, and that includes the way he delivers a raunchy poem in his class that crudely sexualizes his teacher. Coffee is dating Kareem’s mother Vanessa (Taraji P. Henson), and Kareem thinks he can change that by hiring a criminal (RonReaco Lee) to paralyze Coffee. When Coffee unwittingly drives Kareem to a rougher part of Detroit to pay said baddie, Kareem witnesses a cop killing, and it sends the two scrambling from dopey drug dealers and crooked cops.

If you’re thinking about the optics of a Caucasian cop and African-American characters, so is the script, though it doesn’t have worthwhile commentary when getting loud about these dynamics. “Coffee & Kareem” proves to be tone-deaf on two levels: one with its dialogue jokes about the loaded images of seeing a white officer forcefully interacting with black men, and on a deeper level, that audiences would even find these jokes to be therapeutic, or entertaining. Instead it prods at very real wounds about race and police work in America, and it makes for miserable try-hard comedy that aims to play for both the Blue Lives Matter people and the Black Lives Matter people, but will confuse everyone. Yikes.

“Coffee & Kareem” plasters its mundanity under Helms’ nose, his mustache used to make sure we know that he’s both a generic cop and also a total square. It’s not a promising start for a character we’ll be stuck with for what becomes an exhaustive 90 minutes of routine set-pieces and lazy twists, during which Coffee is emasculated by his coworkers, his target criminals, and the ball-busting 12-year-old he dashes around Detroit with. Helms’ plain but neurotic presence is often dependent on his surroundings—as in “The Office” or “Cedar Rapids”—but here it’s the sign of a big flat joke.

One of the story's true heroes is Henson's Vanessa, despite her brief time on-screen. The only rational person wrangled into this mess, she calls out the very sense of insecurity underneath all the characters—good, bad, young and old—in a way that’s on-the-nose, the script making clear why every player is so clumsy and boyish in between frantic attempts at killing each other. Vanessa's maturity means she is above this childish nonsense, and the movie at least gives her a scene to unleash her fury—a slam-bang ass-whooping that shows off Dowse’s special flair for painful comedy. In 2011, Dowse made a whole movie about teeth-popping brawls in hockey, “Goon,” and Henson gives a little trace of that when facing the drug dealers herself.

The other hero for "Coffee & Kareem" is Betty Gilpin, and her commanding deadpan delivery. Having been given a funny but minimal role in Dowse's “Stuber,” she gets more time to run wild as a cop named Watts. She has the same kind of awareness as other characters, but her lines are far funnier because she feel fresh—Watts is a true Gilpin-grade approach to a droll woman with nothing to lose, an intriguing machine still in development after it practically saved last month's “The Hunt.” With Gilpin even more unhinged here, she’s often the grease in a lot of scenes that would be stagnant without her, and you have to wait until the story's second half for it.

There just isn’t much of a movie here, or even much of an homage movie when you compare it to its clear influences like "48 Hours" and "Lethal Weapon." The winking quality doesn't even work, like when a frustrated Coffee later rolls onto his back and dramatically fires his gun in the air. Edgar Wright's homage movie “Hot Fuzz” referenced the same trope (from "Point Break"), and it was funny. Here, it happens and ends before Dowse can even fully register the joke. It’s those types of gags that just aren’t strong enough to make “Coffee & Kareem” stand out, or seem like it's building from the classics that turned buddy cop movies into a formula. Eventually “Coffee & Kareem” is just yet another action movie that ends with a big shoot-out in a dark steel mill. 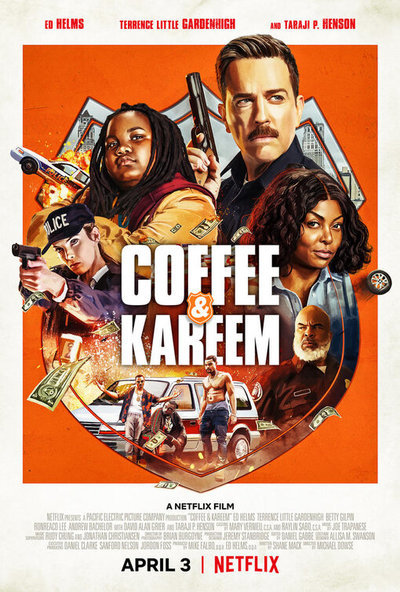