“Coastal Elites” is the very definition of preaching to the choir.

A series of five monologues initially intended for the stage at New York City’s Public Theater but now debuting on HBO amid the coronavirus, the film from director Jay Roach and screenwriter/playwright Paul Rudnick is a gently affectionate satire of a certain type of liberal—or, rather, various faces within that type. But despite the star power that’s been amassed and the obvious craft these actors display, this collection is good for a few familiar chuckles and not much more.

These are characters who express their frustration with and fatigue from the Trump administration through an array of privileged prisms—and as a white woman in my 40s who’s lived in California the majority of my life and is experiencing all those same feelings, I am very much the target audience for their rants. But despite some amusing moments of recognition, “Coastal Elites” doesn’t offer much in terms of wit or insight into this presidency or the dire situation in which our nation finds itself. It’s actually weirdly safe in the way it tells us what we want to hear in the way we want to hear it, not unlike the echo chamber of Twitter, where @PaulRudnickNY is a consistently hilarious follow. “Coastal Elites” certainly won’t change anyone’s mind, but then again, that’s probably not Rudnick’s aim.

What is impressive, though, is the obvious technique required to pull off these monologues, and the fact that presenting them in this form is so much more intimate and unforgiving than a theatrical setting would have been. For these five performers, there truly is nowhere to hide. All are shot head-on in medium close-up, as if they’re on the other end of a Zoom call from us. Every squint and raised eyebrow, every smile and snarl, every costume detail is right there, all the time. But the words themselves hold us in their thrall only intermittently. As is so often the case in anthologies, “Coastal Elites” is hit and miss, with some pieces that are stronger than others.

We begin with Bette Midler as an Upper West Side retiree named Miriam, who was a public school teacher for 45 years. Her religions are Judaism and The New York Times, and she carries her NPR tote bag around town like a badge of honor. “That’s how we recognize teach other, women like me,” she shares conspiratorially. “It’s a secret code.” But despite her civilized, intellectual exterior, Miriam is speaking from an interrogation room at a police station (the segment is called “Lock Her Up”), and we are the officer on the receiving end of her diatribe. She’s there because she got into a scrape with a jerk in a MAGA hat at a Starbucks in the East Village, a Trump fan who likes to wear his favorite red cap in places like this “to own the libs,” as they say. Midler is always a pro, of course, and she’s called on to display a lot of range in a short period of time. But this kind of knowingly broad, comic character isn’t exactly a stretch for her, and Miriam feels more like a litany of stereotypical traits than an actual human being.

Next up is Dan Levy of “Schitt’s Creek” as a Los Angeles actor named Mark, who’s talking by video conference call to a new therapist. He’s waiting to hear back about whether he got the part that could be his big break: the lead in a blockbuster as Hollywood’s first openly gay superhero. Levy brings great timing and warmth as he recalls the various ways he read for the part, depending on the direction he got from casting agents. But’s disappointed to discover that the way they want him to play it is “Supergay”—the title of the segment—a pandering and flamboyant cliché. Levy is an out actor playing an out actor, and there’s naturalism and honesty to the way he relays this experience and pleads for heightened inclusiveness in production and casting. (And this section is especially relevant, given that the Academy released just new guidelines for best-picture contenders that require heightened levels of diversity in front of and behind the camera.) But then his monologue takes a detour to call out Vice President Mike Pence for his anti-gay stances over the years, and adding this political element feels like a contrived, wedged-in effort to provide cohesion with the other tales.

Issa Rae’s section, “The Blonde Cloud,” is the most effective as pure comedy, but her presence and perspective make you wish she had stronger material with which to work. The only performer of color amid the ensemble, Rae plays a woman named Callie who’s just come home from a Black Lives Matter protest, an entirely too-brief nod to a massive, nationwide uprising for social justice. Sitting in an expansive living room decorated in cool, tasteful whites and grays, Callie video chats with an old friend from boarding school to tell her a story about the president’s daughter, Ivanka Trump, who had been their classmate. It’s a long and winding scenario in which Callie and her father get invited to The White House with eye-rolling results. Rae is radiant as always—her expert comic rhythms and captivating smile draw you in powerfully—but it’s a wasted opportunity to include her here and have her character be defined entirely by her interaction with a white woman. THE white woman, actually. Rae is such a charismatic storyteller, though, that I laughed more during her monologue than any of the others. She also finds the sweet spot of humorous indignation that eludes her co-stars.

Sarah Paulson, who can do seemingly everything, can’t do much with the poorly defined character she’s given in her segment, titled “Because I Have to Tell Someone.” Paulson plays a YouTube self-help guru named Clarissa who leads mindful meditation exercises in front of a rotating assortment of soothing images, from a field full of gently swaying poppies to a lush forest with a babbling stream. But she finds it increasingly difficult to find peace within herself, and instead goes on a screed about traveling to the small-town farmhouse where she grew up to visit her Trump-loving family. No masks, lots of MAGA hats and Trump signs on the front lawns—not at all like where she lives and broadcasts from in liberal Vermont. As in the Midler monologue, there’s a ton of technique at work as Paulson navigates a wide range of emotions, but there’s just nothing to Callie beyond her reaction to others.

By far the weakest of all the sections is the last one, featuring Kaitlyn Dever as a nurse named Sharynn who’s traveled from Wyoming to New York City to help treat coronavirus patients. Maybe she’s recording this video on her phone for posterity? It’s unclear, but we do know her monologue takes place in April, when the virus was absolutely devastating the city. Sitting in a break room at a hospital, a surgical mask hanging below her chin and her hair in a messy ponytail, an exhausted Sharynn tells horror stories of bodies lining the hallways and the refrigerated truck that’s waiting outside to hold the overwhelming number of corpses. As she’s shown in films like “Booksmart,” Dever has a direct and refreshing presence. But here, she delivers her lines in a listless monotone, ending the film on a dry, dull note. Despite the suffering she’s discussing, this segment doesn’t carry nearly the poignancy or emotional punch it intended. That’s an unfortunately fitting finale, though, for a film that’s well-intentioned but unlikely to have much impact. 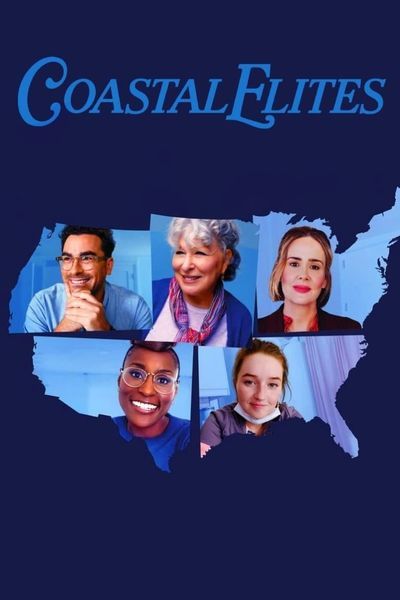