An early scene in “Closet Monster” reveals that the film will not remain completely tethered to reality. After hearing of his parents’ impending divorce, eight-year-old Oscar (Jack Fulton) retreats to his room to find his hamster, Buffy, looking distressed. “What’s wrong?” he asks. “I’m scared,” replies Buffy. It’s a jarring moment, to be sure, but an easily accepted one; who wouldn’t want their pets to respond in the voice of Isabella Rossellini? Buffy becomes Oscar’s constant companion on his journey to adulthood and self-discovery, though her magic doesn’t extend to altering her age expectancy. “You do realize I’m not the same hamster you had when you were a kid,” she tells 18-year old Oscar (Connor Jessup) at the film’s end. “I’ve been replaced four times.” It’s a sly dig at both Oscar and his inattentive parents that no one noticed that the current replacement is a male hamster.

Like the superior “Moonlight,” “Closet Monster” tells the story of queer youth navigating the rocky waters of self-acceptance. Both films use imagery and camerawork as a means of evoking the protagonist’s feelings of uncertainty, but “Closet Monster” resides in a more surrealistic universe. In addition to chatting with Buffy, Oscar has constant visions of being impaled on a large iron pole, which juts from his stomach like a bloody, phallic object. This image is rooted in Oscar’s traumatic childhood discovery of the victim of a heinous, homophobic hate crime. Oscar’s psyche adopts the weapon used in the attack as a symbol for his own concerns about his burgeoning sexuality. It might be above my pay grade to say that pole is a coming out metaphor, but based on the film’s gory climax, that’s the way I interpreted it.

There’s no doubt in Oscar’s mind that he’s gay, and writer/director Stephen Dunn never makes this ambiguous. What he does subtly shade is the friendship that develops between Oscar and Wilder (Aliocha Schneider), a handsome co-worker at a Home Depot-ish hardware store. Wilder’s sexuality is left undefined, and Oscar is content not to inquire, as either option might lead to a rejection. Wilder’s feelings about Oscar are played far closer to the chest than Oscar’s feelings about him: When Wilder asks to borrow Oscar’s uniform shirt for his shift, Oscar lustfully responds to Wilder’s scent upon its return. Unfortunately, his onanistic glee is interrupted by a familiar, sharp pain in his stomach.

“You look different,” says Buffy to Oscar when he returns home after swooning over Wilder. “You’re in LOVE!” Rossellini’s delivery of the line is just great, a fearless response that serves as a mini-oasis of positivity. Oscar denies all, but his spirit animal knows better. His BFF Gemma (Sophia Banzhaf) also picks up on this change, playfully poking at Oscar for more details. In addition to being his companion, Gemma is also the model for Oscar’s F/X makeup. Oscar uses the resulting pictures as his portfolio when he applies at a college specializing in special effects. Since Gemma plans on pursuing a modeling career in Brooklyn after graduation, Oscar also photographs the headshots she’ll need for her own pursuits.

Oscar’s dad Peter (Aaron Abrams), with whom he has been living since the divorce, thinks Gemma is Oscar’s girlfriend. But he freaks out when he sees an innocent interaction between Oscar and Wilder. Peter is a douche-bro who clearly is a stand-in for society’s idea of what constitutes masculinity. He flaunts the women he’s sleeping with in front of his son, plays childish pranks on people, and is vindictive, homophobic and obnoxious. Though Oscar’s mother Brin (Joanne Kelly) never explicitly states why she left Peter, no explanation is required after seeing him in action. Oscar is just as bitter at Brin for the divorce as Peter is, yet his anger is fueled by different reasons.

Brin, like all the female characters in “Closet Monster” represents an escape from the often absurd societal notions of manliness, the same ideas that caused the hate crime depicted at the film’s beginning. They’re the same concepts Peter poisons Oscar with, and Oscar needs to shake from his psyche in order to be liberated. Yet the film is not always hard on Peter; there’s a lovely scene with him at the beginning where he uses a balloon to “fill Oscar’s head with dreams” before bedtime, which Dunn returns to later in a scene that may or may not be real.

You can mine several big diamonds of symbolism from this film, especially in scenes that blur the lines between reality and fantasy so much we can’t trust what we’re seeing. But, and this will surprise the hell out of my high school English teacher, I really didn’t mind being bombarded with symbols. “Closet Monster” is most successful when it uses fable-like qualities to allow us to feel Oscar’s emotions viscerally rather than narratively. With this in mind, it’s only fitting that Buffy the spirit animal ends the film by revealing her truth at the same time Oscar has become comfortable with his. 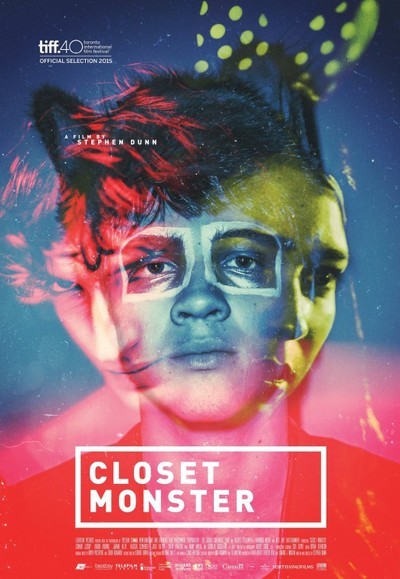