I’m so happy that Clifford doesn’t talk. Watching the truly sweet and hard-to-hate “Clifford the Big Red Dog,” I pictured the version of the potential version of this story that was probably pitched in an elevator in which Clifford drops pop culture references like Poochie on “The Simpsons.” It reminded me that the approach here—empowering and heartwarming—was smarter than trying to ride any current pop culture trend, as modern family movies often do. In fact, Walt Becker’s take on the classic children’s book reminded me of the Disney clamshell VHS tapes that were such a part of my life in the ‘80s. Like those films, it doesn’t feel overly calculated or cynical, making its flaws easy to overlook. Clifford himself is a bit ungainly and hard to control, so it’s acceptable that the movie about him has some of those same problems, and most kids won’t pause to consider how it could have been better (or ponder how much worse it would have been if the big red guy talked).

The smart and empathetic Emily Elizabeth (Darby Camp) is the outsider at her new prestigious New York private school. The 12-year-old is bullied by the mean girls who call her "food stamps," but she has a gorgeous, rent-controlled apartment to return to her with her single mother Maggie (Sienna Guillory). When mom goes out of town on some vague paralegal business, she asks her ne’er-do-well brother Casey (a fun Jack Whitehall), who lives in his van, to keep on eye on Emily and stay out of trouble.

Emily and Uncle Casey are walking one day when they spot an animal carnival run by the mysterious Mr. Bridwell (John Cleese)—a nod to the author of the source material, Norman Bridwell. The Wizard of this Oz shows Emily through his tent of magical animals to a room where she meets Clifford as a small, adorable, somewhat creepily rendered puppy. For some reason, the puppy version of Clifford looks more unrealistic than the giant one. Perhaps it’s because we know what puppies should look like more than dogs who are the size of small buildings, but the puppy Clifford is a bizarre choice, a cartoonish creation that never looks like it’s sharing the same space as Emily. He’s about as believable a movie creature as Roger Rabbit.

After Clifford sneaks home with Emily, Casey tells her that she will have to return the little red guy the next day, sending the poor girl to bed wishing that something would change. She wakes up to find the Clifford that librarians know and love, a giant, expressive, joyous red dog. Casey panics and the center of “Clifford the Big Red Dog” consists of “Clifford hijinks,” as expected. They try to hide him from the grumpy super (David Alan Grier); he ends up at school, where he licks the mean girl into future trauma; he even saves somebody’s life. None of this is particularly memorable, but it's also nowhere near as grating as it could have been. There's a light touch to even the scenes with giant dog slobber. As a parent of three, I have seen more interminable family films than most non-parents probably know exist, and Becker keeps "Clifford the Big Red Dog" moving along.

All of this Big Dog Energy catches the attention of Zack Tieran (Tony Hale), the vicious head of a company called Lyfegro, which wants to make things big. Why? It's hard to say. But Lyfegro's failed experiments include a two-headed goat and a particularly mean sheep. In the ‘20s, you can expect a lot of the family film villains to be tech and business magnates. Thanks, Mark Zuckerberg.

“I wish we were big and strong and the world couldn’t hurt us,” says Emily. It’s a line that will resonate with children who have lived through a more anxious couple years than their parents could have ever expected when they were born. And it’s indicative of the big heart of this film. Yes, some of it looks cheaply made and a few too many of the jokes will thud for parents and children, but it’s such a big-hearted film in every scene. "Clifford the Big Red Dog" is a classic story of how people respond to things that are different, but it has a warming soul that comes through when it matters. Emily gets it: “He doesn’t hurt anybody—he loves.” And he’s easy to love back.

In theaters and on Paramount Plus today. 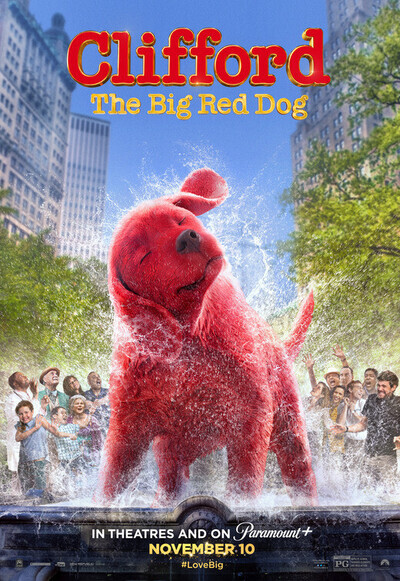