The Chinese spy thriller “Cliff Walkers” is and isn’t as chilly and straight-forward as it seems. Directed by Zhang Yimou (“Hero,” “Shadow”) and set in Northeastern China during 1931, “Cliff Walkers” follows four Chinese spies as they struggle to execute a covert op: identify and rescue a Chinese informer from the brutal occupying Japanese army. These four protagonists are cyphers who are defined by their elegant, spare wardrobe—black overcoats with matching hats—and their heroic resolve to evade capture before arriving at Harbin, their ultimate destination.

This sort of spartan chase narrative (co-adapted by Quan Yongxian and Zhang) is as relentless as it is grim: characters’ backstories are tucked into asides during otherwise negligible dialogue exchanges, and there are only a few moments of tension-relieving humor. I’m not entirely convinced that there’s more to “Cliff Walkers” beneath its captivating, glassy surfaces. But maybe there doesn’t need to be, not when Zhang and his collaborators seem to have accomplished everything that they set out to.

Granted, you might hope for more from this suggestive period drama. But the makers of “Cliff Walkers” rarely give viewers enough time to process what they’re looking at, since so much of Yongxian’s scenario is about moving characters from one place to another.

Yongxian’s story is not personal, because it’s ultimately about martyrdom and utilitarian self-sacrifice. These superhuman values are foregrounded as soon as the Chinese spies crash-land in a snowy Manchukuo forest. They split into two teams, immediately detaching themselves from their romantic partners in order to ensure that they’re only thinking about their mission.

Married couple Xianchen (Yi Zhang) and Yu (Hailu Qin) separate from each other without much complaint—though they do decide that “whoever makes it sends for our children”—and so do young lovers Chuliang (Yawen Zhu) and Lan (Haocun Liu). “Sorry,” Chuliang says to Lan before they part ways (but after he tries to kiss her). “I didn’t think we’d be separated.” She looks surprised, but doesn’t otherwise respond.

There’s a little more to the movie’s villains, but not much. In an early scene, a small group of Japanese officials warm themselves up by passing around a tin flask. After that, they execute a group of Chinese political prisoners. The Japanese don’t seem to care about their terrified victims or their dire task. In fact, the Japanese only really come alive when they spit alcohol all over the trembling Chinese spies. This is an energizing ritual for the Japanese; or at least, that’s how it’s presented, without any other contextualizing information. The Japanese soldiers’ impassive behavior speaks as clearly for them as Xianchen and Chuliang’s reflexive, stoic actions. So the chase that follows—the Japanese try to use Chuliang’s team to draw out Xianchen and Yu—is mostly unambiguous, though we sometimes don’t know who is working with the Japanese, or if they’ll be discovered by the Chinese spies. Action is often the thing in “Cliff Walkers.”

It’s also very easy to be seduced by the movie’s high-toned production design, snappy scene-to-scene pacing, and crisp action choreography. Most of the movie’s tension simmers beneath its inviting surfaces: some characters raise their voice, but most whisper or hiss like they’re trying to hypnotize each other with ASMR-style catch phrases. Xianchen delivers the best of these slogans with a hard-bitten sort of resignation: he tries to re-assure Yu that “Utrennya,” their mission’s Russian code name, means “dawn.” “Everything will be fine when the sun rises,” he says behind pursed lips. That explanation is somehow less reassuring than another impromptu Russian translation from an earlier scene. Chuliang and Lan try to explain, during a warmly lit rendez-vous with fellow Chinese spies, that he learned Russian from the Communist Manifesto. “Proletarians of the world, unite” Chuliang says in Russian. His newfound peers unfortunately do not speak Russian, so they can’t really follow him. Instead, they raise their glasses, and salute each other in Mandarin. That gesture is not very comforting, but that’s kind of the point: no sloganeering can fully explain or humanize what the movie’s protagonists do.

I look forward to rewatching “Cliff Walkers,” if only to see if the movie implies as much as I think it might about the propulsive, but ultimately meaningless sweep of political action. Maybe Zhang’s latest is just a popcorn movie that’s also a sad reminder that sometimes, violence is just violence. Or maybe “Cliff Walkers” is a poison apple of a genre movie that seduces you with nostalgia for a movie version of the past—those cars, those fedoras!—and then leaves you to wonder what it was all for. In many ways, Zhang’s latest is the coldest film that he’s made in a while, though it might also be his most alluring. 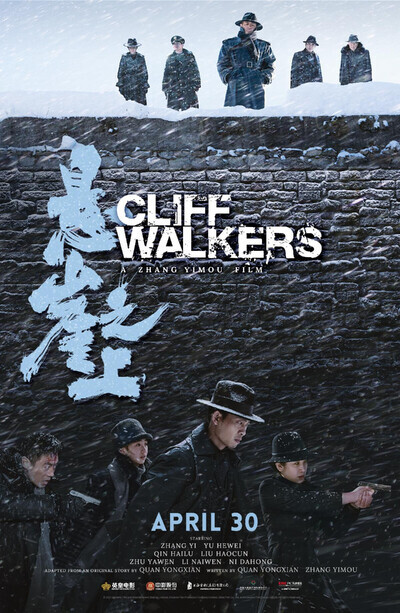