Kevin Smith movies can sometimes read as un-reviewable. Take in point “Clerks III,” which more often has the feel of a behind-the-scenes feature, a home movie, or a commemorative issue than a film that should be taken on its own and judged for creativity and intent. It’s good with its minimal creative aspirations, and it can be as personal for the fans as it is for him, a tear-eyed businessman who made movies you may love. That is its selling point: you won't get much that's new or memorable—like when you first saw "Clerks"—but you will be able to revisit the making of it.

Is "Clerks III" at least funny in its own right? Yes, at least in the warming way of seeing foul-mouthed Randal (Jeff Anderson) again, winding up grossed-out customers up from behind the counter of the Quick Stop convenience store in New Jersey, standing with his long-time buddy Dante (Brian O’Halloran). It’s equally curious and bizarre to see Randal and Dante still at the Quick Stop, like employees frozen in carbonite since reopening the store in the last movie. But Smith's writing isn't about doing something special with this labored depiction of arrested development, he's too focused on just making it about "Clerks."

There's also a funny life change for religious Transformers fan Elias (Trevor Fehrman) from “Clerks II,” which this movie leans into as its best ongoing joke with various appearance changes, parallel to tedious jokes about NFTs and his own silent companion, Blockchain (Austin Zajur). Then there's loitering drug dealers Jay (Jason Mewes) and Silent Bob (Smith), who now own the video store next door, and have naturally turned it into a THC shop. They have a few dim-witted moments of self-realization that made me chuckle.

“Clerks III” is a movie about the main characters of “Clerks” making a movie called “Inconvenience,” virtually remaking “Clerks” for us shot by shot. Randal suffers a heart attack (a “widow maker” wth 80% chance of not winning, as Smith experienced himself) and it leads to an epiphany. Poignantly, he says “I saw the whole movie of my life flash before my eyes, and you know what? It sucked.” Randal wants to make a movie about everything he's seen at the Quick Stop, and as a former video store employee, he should know how. He hires—forces, really—Dante to become his producer, and the production will shoot inside the Quick Stop and use memories, putting the latest strain on their relationship. It’s clear when anyone reads the script as to who’s who—Dante is a “Dan T” (a funny joke), and Dante's exes are in the mix too, like Veronica (Marilyn Ghigliotti). Eye-rolling as much as he ever does, Dante is not amused but he goes along with it.

The George Lucas of his own View Askew Universe, Smith has created his own mini blockbusters that parallel the larger business. Here, he has the same idea as successful products like “Avengers: Endgame” or “Top Gun: Maverick.” But where those movies bring back familiar characters, beats, and moments for a story that could stand on its own, Smith’s approach is just to rely on every part of the making of “Clerks,” to punch it up with easter eggs, and actors that you’d only be amused to see if you remembered their two-minute bit in “Clerks.” There's no larger plot though, and the big surprises only come from cameos (Amy Sedaris, Justin Long, and Ben Affleck are amusing in particular).

The meta storytelling of "Clerks III" gets more and more flat when it’s about paying tribute to Smith’s own eureka moments and filmmaking back in the '90s than what Randal as an individual character does. Sure, it’s cute that Randal's crew has a mic on a hockey stick, as the boom mic used for “Clerks” really was, or that they repeat a nauseating car sequence where the camera, in the back seat, leaps from Randal and Dante with each line while talking about not going to film school. But there are so many scenes of “Clerks III” that are so beholden to the text of “Clerks,” with actors brought back to play the same role, recreating a shot. It’s here that the movie-within-the-movie is not about Randal, but just Smith rehashing it, championing his references for existing. There’s plenty of “I’m not even supposed to be here today” references, including a final one that feels like a sell-out because of the clunky and grave importance foisted upon it.

At the very least, "Clerks III" gives us more time with Anderson’s Randal, and it’s warming to see him treated as more than just the devil on Dante’s shoulder, as he is in the previous movies. Anderson gets to shape something of an arc with this character while Dante remains stuck in tedious preoccupations with relationships that have never had their desired emotional impact. And when Smith eventually brings it back to the ultimate love story—between that of Dante and Randal—it feels more about going through the motions than a grand statement about friendship.

"Clerks III" comes from the heart, but with such minimal dramatic tact. Aside from the numerous times Smith goes for the swells of recognition, he can easily let other elements do the work: a wistful ballad played out in full; O’Halloran’s wet eyes in sad scenes that hit like commercial breaks and are meant to squeeze him and us for tears; the inclusion of bracing death as the ultimate reminder that such preciousness is justified.

Familiarity with Smith's previous movies is not as crucial to enjoying “Clerks III” so much as sentimentality. And for as welcome as its sentimentality is, “Clerks III” shows Smith wanting points simply for embracing it. Sometimes it is enough, at least while the movie is unfolding (the charms faded fast for me the minute it was over). With “Clerks III,” nostalgia is its own convenience for Smith. It’s cheap and fleeting, but it is comforting. 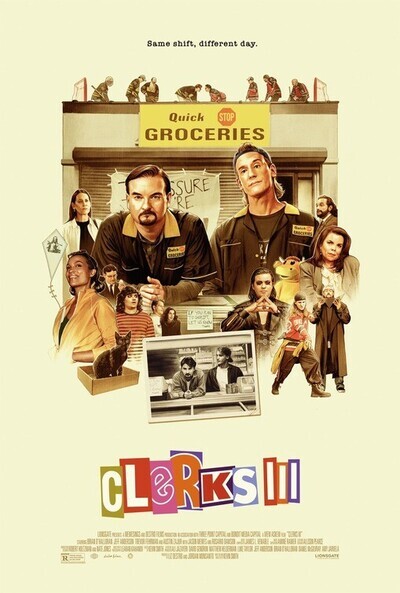