The first words we hear in "Clementine" are "Wake up." Karen (Otmara Marrero) has one of those rare, blissful moments of awakening to a moment of being completely in love and loved in return. An unseen character we will barely see, and know only as D (Sonya Walger), tells Karen she is waking her up for two reasons, inspiration for D as an artist and reassurance for D as a romantic partner. Karen reassures her with a confident, open-hearted smile. "I have never broken anyone's heart."

It is Karen's heart that is broken by D the next time we see her. While that is a different kind of awakening, "Clementine" unspools like a dream, Karen's distress and uncertainty reflected in the patient, understated unfolding of the story, the externals underlying what she is feeling. She has run away to D's lake house, breaking a window in order to enter, the glass cutting her hand. As she listens repeatedly to an old voicemail from D about bringing her there, breaking in is at once rebellion, escape, revenge, and trying to find an alternate reality, the one where the promise of that enticing message has come true. The house is remote with reflective surfaces and retro touches, an old-style corded phone, a turntable and analog LP records, and the score by Katy Jarzebowski has a raw, unsettling sound, adding to the mood of dislocation and displacement. And there's a gun in a drawer, too, and a teenage boy, both bringing a threatening male energy.

The prismatic narrative from writer/director Lara Gallagher splinters the lines between wishes, dreams, lies, and manipulation. Karen spots a lovely girl sunning on the dock but does not say anything. Later, the girl, who says her name is Lana (Sydney Sweeney), tells Karen she has lost her dog and will get in trouble if she does not bring him home. Will Karen drive her around to find him? Karen is suspicious ("No one's dog is really named Bingo!"), but drawn to Lana, and agrees. When Lana leaves her number, Karen calls her. She lets Lana think she owns the house and that she is the one who created the art on the walls.

Lana speaks very softly, not a confiding whisper but a flat affect that could indicate that she is very shy, or very young (she says she is 19 but could be much younger), or just pretending to be either. Karen begins to work out some of the dynamics of her unresolved feelings with D as she spends time with Lana. Will she be D this time, the more powerful one, or will Lana be her new D? D tells Karen not to be stupid and Karen says the same thing to Lana.

Karen and Lana each have a chance to "rescue" the other. Karen is exhilarated when Lana accuses D of betrayal and hangs up on her. Karen confronts the men Lana claimed abused her. When a character tries on another's clothes, is it an expression of intimacy or a predatory invasion of boundaries?

Karen uses what are clearly D's words to explain the pictures on the walls to Lara. "It's more about the process than the result, the emotion of the process." That is both the strength and the weakness of "Clementine," which at its best is more a mood piece than a narrative, an exploration of the shifting power in relationships with striking images and overtones of duality. But at its weakest, it is more of a workshop than a story—the ultimate resolution, like the story Lana tells that gives the film its name, is less meaningful than it aspires to be. 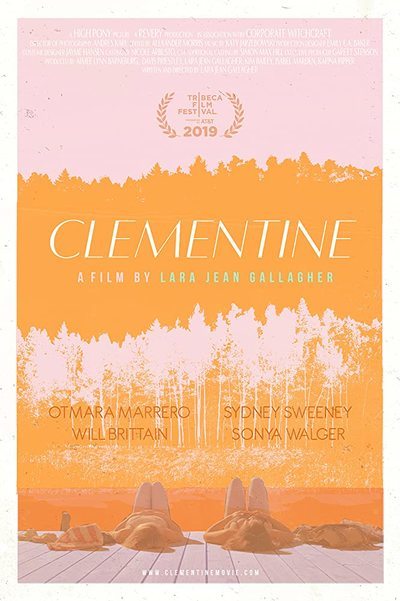 Will Brittain as Beau