If there is one central image in the work of Federico Fellini, it's of Fellini's autobiographical hero being smothered by women. They come in all shapes and ages, from old crones to young innocents, from heavy-breasted mother figures to seductive nymphs. One of Fellini's favorite strategies is to gather all the women into one fantasy and place his hero at the center of it. That's what he did in the celebrated harem sequence in "8 1/2," and that's what he does throughout “City of Women.”

There is, however, an additional twist this time. Since the basic Fellini universe was created in “La Strada,” “La Dolce Vita,” “8 1/2,” and “Juliet of the Spirits” (1965), beliefs about the role of women have undergone a revolution, even in Italy. It is no longer enough that Fellini deal with the ways women tantalize, dominate, and possess his male heroes. Now he must also deal with the women themselves. For Fellini, this is probably not nearly so much fun. His idea of a liberated woman is fairly clear from the wife-character in “8 1/2” (1963). She is severe, wears tailored suits and horn-rim glasses, and wants to spoil all the fun. Fellini's hero, in that film and in “City of Women,” is named Guido, is played by Marcello Mastroianni, and wants to escape from the horn-rim types and lose himself in the capacious bosom of a thoroughly undemanding sex object.

At the beginning of “City of Women,” however, Guido finds himself riding on a train across from a severe-looking woman in a tailored suit. He tries to seduce her. She sentences him to an imaginary odyssey through a series of sexual fantasies, most of them devoted to the unpleasant fates of men who do not have the correct attitude about women. Most of these fantasies, and indeed many of the specific images, are familiar to anyone who has seen several Fellini films. There is a long circus chute for Mastroianni to tumble down (“Juliet”), and a group of circus scenes (from half his other films), and a wall covered with portraits (remember “Fellini’s Roma”?), and an insatiable satyr, and, of course, the full-lipped, full-bosomed, smiling, and inexhaustible temptress who turns up, in one manifestation or another, throughout Fellini.

“City of Women” does nothing original or very challenging with this material. Although it pretends to be Fellini's film about feminism, it reveals no great understanding of the subject; Fellini basically sees feminists as shrill harems of whip-wielding harridans, forever dangling the carrot of sex just out of reach of his suffering hero. Fellini has rarely been able to discover human beings hidden inside his female characters, and it's a little late for him to start blaming that on the women's liberation movement.

Is “City of Women” worth seeing? Yes, probably, even though it is not a successful movie and certainly not up to Fellini's best work. It's worth seeing because it's a bedazzling collection of images, because at times it's a graceful and fluid celebration of pure filmmaking skill, and because Fellini can certainly make a bad film but cannot quite make a boring one. 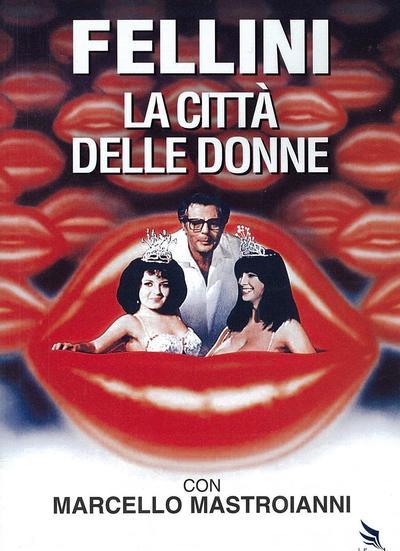