Even at a time when digital technology has helped create an enormous influx of documentaries covering seemingly every subject matter possible, the arrival of a new work by Frederick Wiseman carries a weight that puts most of its competition to shame. For more than a half-century, Wiseman has trained his cameras on institutions ranging from a Philadelphia high school (“High School”) to a Florida women’s shelter (“Domestic Violence”) to the world’s most famous nude dancing establishment (“Crazy Horse”). However, his deceptively simple cinematic approach—he uses a largely observational fly-on-the-wall style that favors long takes, and scrupulously avoids such genre hallmarks as talking head interviews with experts, or even subtitles identifying who the participants are—has yielded fascinating and oftentimes hypnotic results. Wiseman has made some of the most significant works in the history of documentary filmmaking.

This is certainly the case with his latest effort, “City Hall,” a sprawling deep dive even by his standards (it clocks in at 272 minutes, more than an hour longer than Martin Scorsese's “The Irishman”) that finds him focusing on his hometown of Boston. Wiseman observes the city as it goes about its day-to-day operations over the course of a few weeks, running from late 2018 through early 2019, while coming to terms with any number of fundamental shifts in terms of the racial, gender, and social makeup of its evolving population. I realize this description makes it sound like a film that perhaps only Leslie Knope could possibly love, but I promise you that the end result is so engrossing that I devoured the entire thing in one single sitting without ever once glancing at my watch or shifting in my seat. Even in a filmography with more than its fair share of impressive achievements, it deserves consideration as one of Wiseman’s greatest.

Unlike virtually all of Wiseman’s other films, in which the institution under observation is the closest thing to a central character, “City Hall” contains a person who is the clear protagonist and through line for the majority of the events being shown. This, not surprisingly, would be the city’s Democratic mayor, Marty Walsh, who presents himself as the virtual antithesis to the person currently residing in the White House—a man who not only genuinely believes in the notion that the key duty of government is to help and uplift all of its constituents, but who is perfectly comfortable with delivering a speech in which he espouses “social justice.” In meetings at City Hall, we see Walsh juggling the countless array of problems that crop up on a daily basis in even the most effectively run cities in a generally constructive and forward-looking manner, in which he spends just as much time listening to others as he does speaking. Outside the office, he handles his seemingly endless array of public functions with a similar degree of empathy for his constituents, no matter what the occasion. While Wiseman, as always, eschews any sort of overt editorialization, Walsh is presented here as a politician who could not care less about power or status and is concerned only with making things run as smoothly as possible. (That said, there are a couple of scenes, especially a late one involving a meeting with an NAACP representative behind closed doors, when he displays a toughness that he carefully keeps under wraps during his more public appearances.)

While Walsh may be the face of the city’s government, it requires the dedication of hundreds of lesser-known but equally dedicated individuals to keep it running to the extent that it does and Wiseman and cameraman John Davey bear witness to many of them as they go about their daily business. Myriad task forces and committees are seen trying to put forth the city’s business while trying to embrace the needs of the various communities. However, it is impossible to satisfy everyone all the time and, rather than shape the material to conform to some kind of idealized “West Wing”-style fantasy, Wiseman does not shy away from the compromises and failures to connect that inevitably occur. In one of the most unexpectedly electrifying sequences (clocking in at around 30 straight minutes of screen time), we witness a town hall meeting between the owners of a proposed cannabis dispensary and the representatives of the low-income neighborhood where it's planning to open. As the owners talk about their community responsibilities and how they plan to address them in the most noble of terms, the residents air their legitimate concerns about the effect it will have on the neighborhood. And while the government representatives assure them that these issues will be given careful consideration, there's the shared sense among everyone in the room that this will most likely not be the case in the end.

That said, “City Hall” is not just one policy meeting after another and indeed, some of its most memorable moments involve other aspects of how the government serves the people. We see the wedding of two women performed in an anonymous city hall office and while it may lack in the overt trappings on display in a more lavish ceremony, it more than makes up for that in terms of the genuine sense of happiness that radiates from both the participants as well as the officiant. There's a very funny sequence in which we see two men taking on city hall, so to speak, by showing up to plead their cases in regards to parking tickets and find that the bureaucracy is not as unyielding as they had been led to believe. There's a long and extraordinarily moving passage set at a meeting designed to forge a sense of community outreach towards veterans in which we see a couple of participants tell their harrowing stories. Wiseman even manages to capture moments of sly humor as well, as in the chapter in which a building inspector takes a tour of a condominium under construction in a neighborhood that is evidently in the early stages of gentrification, and offhandedly remarks to the builder showing him around that the building’s lovely waterfront view will almost certainly be blocked by the arrival of another condo being developed a couple of blocks away.

Frederick Wiseman turned 90 earlier this year, but “City Hall” shows that he is still as vital of a filmmaking force as ever. This is both one of the best movies of the year and one of the most complete and compelling observations of the inner workings of city government, regardless of medium, that I have ever experienced. At a time when people have been led to look upon government only in the most cynical of terms—not without good reason—it allows viewers to see that while the system as a whole may not work perfectly for everybody all the time, it is nevertheless driven by individuals doing what they can to help it evolve. This film would be a perfect addition to any high school class focusing on government—it not only gives a detailed look at its inner workings to rival that of any textbook but does it in a way that keeps viewers riveted from start to finish. 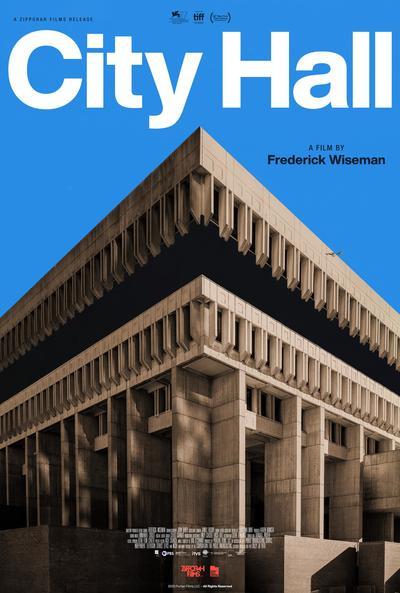