The ads for the emotionally draining mainland Chinese action snore-fest "China Salesman" make it seem like also-ran action star Steven Seagal and over-the-hill boxer Mike Tyson are the film's co-leads. In reality, both men are barely in a film that, as the title implies, is about a Chinese protagonist, specifically the plucky, Uganda-based Telecom vendor Jian Yan (Yuan Li). So, to be fair: "China Salesman" isn't bad because it doesn't deliver more than a scene's worth of hot Seagal-on-Tyson action, rife though that one scene may be with pillar-smashing, body-double-using, arm-flailing, and table-breaking. No, "China Salesman" is terrible because it's 110 minutes of a chest-thumping hero who swoops into a foreign country just so he save them from themselves.

Funnily enough, Seagal and Tyson both play mercenaries who exploit the much-discussed, but rarely specified political turmoil in Uganda. A coup d'etat and/or civil war is imminent, and it's up to Jian and his meek, but otherwise under-developed Chinese colleague Ling Ruan (Ai Li) to put the two warring factions in touch with each other using their company's superior cell phone technology. Unfortunately, Jian is held up by politicking, in-fighting, and corporate sabotage facilitated by imperious goomba Lauder (Seagal) and his vague "native" lackey Kabbah (Tyson), both of whom work for the haughty and hateful European telephone salesmen Susanna (Janicke Askevold) and Michael (Clovis Fouin).

A lot of repetitive, sluggish narrative complications—most of which seem to only exist in order to paint Jian in a stunning light—ensue. Susanna has a couple of moments where she softens to Jian's overwhelming humanity, despite also repeatedly telling him that his company doesn't deserve to win a much sought-after telecom contract because they're Chinese, and therefore inferior. This allows Jian to declare—in mangled English that Yuan Li over-stresses in a woefully over-exaggerated oratorical style—that he will make Susanna, Michael, and all the other Euro-trash haters stop referring to him as a lowly "China salesman:" "I will make you call me Mr. Yan!"

There's a similarly doofy hammer-misses-nail execution in pretty much any scene that establishes Jian as a superheroic man of the people who is beset by prejudice and greed. This makes poor Yuan Li seem like a fish out of water, especially when he executes a painful-looking belly flop on dry land just so he can plant and wave a mainland Chinese flag. In this scene, Jian immediately signals to wary Uhdan warriors that he and his crew come in peace; he's also essentially wailing "Mine's bigger" for the crowd at home.

Another clumsy scene: Jian is hand-cuffed after his canteen of goat's milk is replaced with liquor (there are legally-enforced, religious laws against the possession of booze in Uganda). As he's being cuffed by a pair of mortified extras, Yuan wails and hops around like an electrified science class frog. And, in a laughably unnatural Stentorian voice, he screams: "I've BEEN set UUUUUP!" Hammy and painfully incompetent: yup, this is a film co-starring Steven Seagal.

Speaking of the big man: you're probably wondering what he does in this film whenever he's not gently growling and cautiously waddling around tables while drinking beer and patting a female lackey's rear end. I'm sorry to report: that's pretty much all he does. As in a lot of latter-day Seagal vehicles, Seagal is barely in the film. These days, he often plays villains, though he almost never allows himself to cut loose, and be memorably nasty (I hear "Machete Kills" is fun). So the above-mentioned tap on the bum is gentle, but ostentatious. Which wouldn't be so icky if Seagal had not been, in real life, repeatedly accused of rape and sexual assault. It's almost as if he threw in a little sexual harassment into this film just so he could thumb his nose at any American critics who expect more from him and/or still remember him.

Speaking of rape and sexual battery: Tyson's equally problematic appearance is also light to the point of being distractingly under-developed. Kabbah's an antiheroic heavy who takes a swing at Lauder simply because Lauder insists that Kabbah have a drink with him (and because the film's posters need some action to sell). But Kabbah, like Susanna, eventually is allowed a humanizing moment or two, a fine idea that is executed with a pachyderm's grace when Tyson—moving robotically, and mumbling his way through lines that he clearly recorded during a post-production recording session—says something vague about "my faith" and "my tribe." This may prompt you to yell back at the screen "Which tribe? Whose faith?" But I digress.

Still, if you—like me—are a reluctant Seagal completist, you might say to yourself: cram it, Simon Abrams, this movie sounds like dumb fun! Friends, let me assure you: we deserve better. Like chocolate babka, "China Salesman" is pretty crummy, no matter which way you slice it. The film's nature as a work of propaganda would be more deplorable—or at least eyeroll-inducing—if it weren't so poorly blocked, scripted, performed, and choreographed. There is no joy in Seagal-ville, dear rubber-neckers, because pretty much everybody here has struck out. 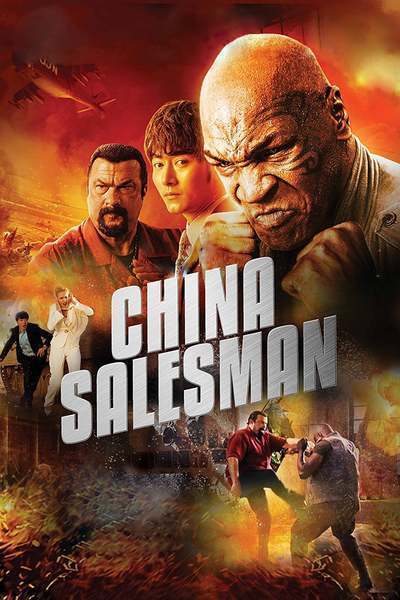