Mothers are blamed for a lot, in cinema and in life. Their love is essential to a child's development, but too much of that same love is damaging. Wanting a close relationship with your adult child is healthy, but how close is too close? One of the greatest strengths of "Child's Pose", Romania's 2014 Oscar-entry and winner of the Golden Bear this year in Berlin, is that these questions are presented, but no real answers are provided. The answers we get are murky, ambiguous, disturbing. The truth is there, somewhere, but lost in an abyss of recriminations, resentment, and things too dark to discuss. It's an extremely strong and upsetting film, yet another example of the fascinating things going on in Romania's new wave, with a breathtaking lead performance by Luminita Gheorghiu as Cornelia, the competent career-woman in Bucharest, determined to clear her adult son's name.

Cornelia is a nosy mother. She is estranged from her son Barbu (Bogdan Dumitrache), and blames that estrangement on Barbu's girlfriend, whom she can barely reference without a sneer. Cornelia is a wealthy successful architect and gave her son all the privileges available to him in the chaotic post-Ceaușescu era.  And yet he drifts, he lacks focus, he wants nothing to do with his mother. When he hits and kills a peasant child while speeding and is arrested for drunk driving, Cornelia, wrapped in furs, swoops in to the rescue. "Child's Pose", like so many other current Romanian films, is really about class. Cornelia is part of the Bucharest elite, and her friends are surgeons and famous opera singers. The family of the dead child are traditional peasants, described by one of the arresting officers as "very simple people". When Cornelia and the dead child's parents finally meet, in a scene almost absurd—Cornelia chooses that moment to babble about her son's achievements and what a wonderful athlete he was as a teenager—the culture clash is so enormous that it is as though nobody speaks the same language.

Cornelia is convinced that her son is innocent, although all evidence points to the contrary. She sets out to clear his name, to make sure he is not railroaded by the cops (who all treat her with a mixture of impatience and condescension, an interloper in their more practical world). She is desperate to mend the relationship, and yet Barbu is totally closed to her overtures. Gheorghiu as Cornelia is elegant and hard, pained and calculating, competent and shifty. She chain-smokes, and does so in a glamorous way, holding the cigarette up and close to her face. Her eyes shift around the room, taking things in, thinking, re-evaluating, hedging her bets. She is not likable; she knows it and it doesn't matter to her. At the raucous birthday party thrown for her early in the film, she dances around with her husband in an empty ante-room, laughing and twirling like a little girl, and there's something tragic about her joie de vivre. There is damage here, somewhere, catastrophic and complete.

Similar to Bong Joon-ho's "Mother", Cornelia is a mother who will stop at nothing to protect her son. Much of what Cornelia does is underhanded, at times indefensible. And Barbu is no prize. Cornelia describes him to others as "warm and generous", but that seems to be her fantasy of him. In the film, he remains mostly a sullen mystery, and only through a show-stopper of a scene between Cornelia and Barbu's girlfriend Carmen (Ilinca Goia), when Carmen opens up in graphic detail about their sex life (all as Cornelia sits silent and eager for the details), do we learn anything about him. We understand very early on that Cornelia is an unreliable narrator of her own life. In her version of events, she is a scorned martyr, she has done nothing wrong, all she has done is love him, perhaps too much, but is that a crime? In one provocative scene, Cornelia rubs healing ointment into Barbu's back before he goes to sleep. The expression of relish and satisfaction on her face as she kneels astride her son is more eloquent than any dialogue could ever attempt.

Written by Răzvan Rădulescu (who also wrote "The Death of Mr. Lazarescu"), "Child's Pose" was directed by Calin Peter Netzer, and the film announces him as a major talent. The hand-held cinematography, gritty and raw, gives the film an immediate and urgent documentary feel, and each moment has a great sense of both the absurd and the poignant. Even minor characters are well-drawn and captured in small details that tell you who they are. In one early scene, Cornelia invites her maid to have a cup of coffee. Cornelia always has ulterior motives: her maid also cleans Barbu's apartment, so Cornelia begins to grill the maid on the state of affairs at her son's place. Cornelia, smoking a cigarette and elegantly chilly with her blonde coiffure and beaded top, sits comfortably high in the culture's hierarchy and oozes oblivious privilege, all as the maid, wearing a third- or fourth-hand University of Southern California sweatshirt, squirms in embarrassment at being questioned about what books are on Barbu's nightstand. And even that question contains an ulterior motive: Cornelia gave Barbu two books, one by Herta Muller and one by Orhan Pamuk, and she wants to know if he has read them. "They both won the Nobel, you know," Cornelia informs the maid, who can't even feign interest at such incomprehensible words.

What makes Cornelia complex is that she operates from love. Her love is titanic, monumental, unstoppable. The film does not judge her. It merely presents her. It shows us where love can take us, what love becomes when it is thwarted, how twisted it can grow when it is not nurtured. And Gheorghiu, familiar to audiences already from her performances in "Beyond the Hills", "4 Months, 3 Weeks, and 2 Days", "12:08 East of Bucharest" and "The Death of Mr. Lazarescu", is fearless. Her performance as Cornelia is iconic in scope. 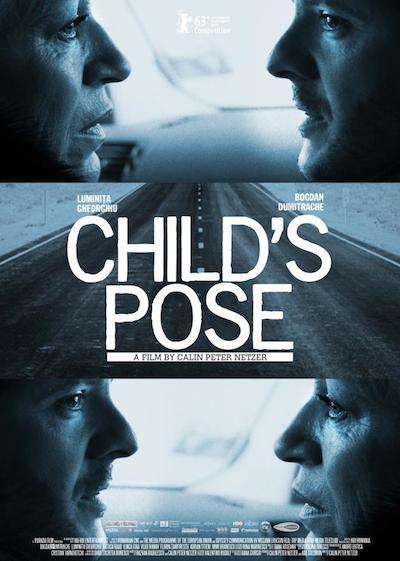