You've got to admire James Franco's chutzpah. After directing a few vacant things that barely count as movies, he just started going around buying the rights to classics like he was William Wyler or John Huston. After "As I Lay Dying," last year’s fascinating, if perhaps undercooked Faulkner adaptation, Franco has returned with a stab at Cormac McCarthy’s early novel "Child of God." People who were worried when Franco snapped up the option to "Blood Meridian," McCarthy’s ‘unfilmable’ masterpiece, won’t have their fears allayed any by a good faith but blank retelling of McCarthy’s first major statement. Franco clearly wants to be a provocative artist with the chops to bring major literature to life, but he has no relationship with the camera. Every cut has the same effect as the curtain raising on the next act of a play: here’s some more action, for better or worse. It’s like "Dogville" with the sets filled in; watchably eccentric but rudderless.

Scott Haze makes a hell of a showing for himself as Lester Ballard, a half-mad, backwoods degenerate with no place in polite society. "Child of God" starts with Ballard losing every piece of property he owns except his rifle and retreating into the woods. He squats in a vacant shack, finds the body of a dead girl, brings her back to the shed and then starts courting her. Things somehow get worse from there. Before long a posse (led by Franco, in a small, unmemorable role) are chasing him into the hills looking for some form of closure after his twisted reign of terror. Oh, there’s also a mostly useless, though incredibly entertaining sidebar featuring the always-welcome Tim Blake Nelson as the sheriff and Jim Parrack as his deputy. They don’t do much of anything but their no-bullshit chemistry works like gangbusters and Franco was smart to focus as much time on them as he does, even if it meant losing some of the book’s better passages. They’re like a Kentucky Fried Statler and Waldorf, and they’re a welcome respite from Haze’s literal go-for-broke turn, even if they don’t do much more than arrest him a few times.

It’s a curious thing. What impulse leads most directors to seek out great books and turn them into films? Presumably the writer has conjured up a set of events so compelling in a totally unique milieu and he or she wants to see it brought to life. James Franco isn’t like most directors. After publishing a few books, going to a couple of expensive grad schools and turning up in an adaptation of a few of his short stories, it’s clear that Franco’s approach to movies is about respect for the word above all else. "As I Lay Dying" frequently stopped its not-terribly urgent narrative so that characters could stare into the camera and read passages of the book aloud. Its one cinematic device, frequent split-screen, was apparently chosen to fit more of Faulkner’s prose into its nearly two hour runtime. "Child of God" has no interest in breaking the fourth wall but sure does plenty of staring. Cinematographer Christina Voros’ handheld camera tries to keep up with our ‘hero’ as he defiles a body, foams at the mouth, cries like an infant over his losses, defecates in the woods, and does himself and others repeated harm. Franco gracelessly follows Haze from one sordid misadventure to the next with no feeling for why McCarthy made all these decisions the first time around. It’s a great ad for the book because what’s missing from the film’s conception of the characters is all on the page. And despite a…well, one hesitates to use the term ‘star-making’ about a performance so deliberately hideous and grotesque, but a grippingly insane performance from the badger-like Haze, there’s just too much silence where their ought to be prose.

Which isn’t to say the film is without merit. It is utterly fascinating to see classic literature re-enacted as if it were theatre, and it takes courage to grab up something as iconic in its darkness as "Child of God" and just play it straight. It’s as if Haze decided to put on the most perverse one-man show imaginable and Franco was there to catch it all. This isn’t the best way to get at the beauty of an author’s worldview (even one as flamboyantly scabrous as McCarthy’s) as it’s got no poetry of its own but it’s evidence of respect. Franco has been doing whatever the hell he’s felt like for the last few years and it’d be easy to coast on meatless supporting roles in the indies that come his way, but when you consider that he could be Zach Braff and do exactly what people expect him to, Franco starts to look a lot more fearless. He may just be the coolest kid in class trying to encourage everyone to pay attention to the English teacher, but there’s something noble in that. The day he figures out what to do with his camera, he’s going to graduate to artist and we may have a properly excellent director on our hands. 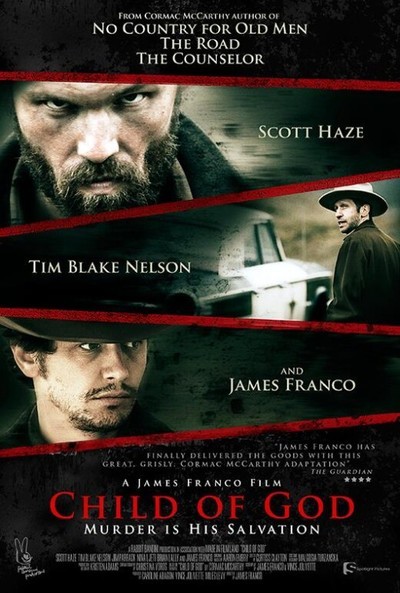