As an avid fan of the Food Network and food porn like “Babette’s Feast,” “Big Night” and “Sweet Bean,” I confess to being a bit of a pushover when cinema goes gastronomical. “Chef Flynn” presents an unusual dilemma in that it's about a chef whose food I did not want to eat. This is not to say the meticulously crafted micro dishes created by “kid chef” Flynn McGarry aren’t good—I wouldn’t know because the screener didn’t come with any samples. But a great chef once said that you eat with your eyes first, and McGarry’s painstakingly arranged, tweezer-assisted concoctions were just too sparse and fussy for me to salivate over. I know that this type of culinary experience is in fashion nowadays, but I’m a fat guy who can’t muster much excitement for a $160 meal I can fit in my navel.

You may have heard of Chef Flynn McGarry, the subject of a New York Times profile at the height of his adolescence. The then-fifteen year old, who had been practicing his craft since he was ten, caused a bit of controversy by appearing on the cover of the Gray Lady’s section on top chefs. Readers took to Twitter to bask under the site’s constant waterfall of HaterAde, complaining about McGarry’s lack of paid dues in the culinary profession and his youthful status. “Chef Flynn” addresses the age-based elephant in the room repeatedly, sometimes in humorous fashion (a review calls him the “Doogie Howser of the kitchen”), other times as an earnest plea for legitimacy. The film isn’t out to convert the skeptics; it’s just here to argue its case.

But like any good lawyer, “Chef Flynn” tries to divert the jury from problem spots that may potentially weaken or complicate its argument. Director Cameron Yates doesn’t interrogate, nor even lean into, the privilege that allowed McGarry his opportunities. On cooking shows, young wannabe chefs are a hot commodity, but very few of them would have McGarry's resources to prepare multiple course meals from the comfort of a home lined with thousands of dollars worth of cooking equipment and access to a willing clientele. McGarry’s brand-building is not solely a product of his impressive skillset, and by sweeping his connections under the rug, the film gives the unintentional impression that it has something to hide.

Additionally, Yates doesn’t dwell on McGarry’s process (outside of his love of that vile vegetable known as beets), nor is there any worthwhile discussion of his philosophies on cooking or his thoughts on his unconventional ascent in the cooking world. We see footage of a talk McGarry gave on a new evolution of the modern chef, one who bucks the respected trend of earning dues via culinary school and decades of experience. But the film suddenly cuts away just when McGarry starts to delve into the topic. This is a worthwhile conversation to be had, and a bit of ammunition to be aimed at the naysayers, but again, “Chef Flynn” is way too skittish in detailing how the sausage is made. It just wants you to savor the success story and not ask any questions.

“Chef Flynn” often feels like a film made by its subject’s Mom, which makes sense as much of the footage we see was indeed shot by McGarry’s mother, Meg. A filmmaker in her own right, Meg McGarry began putting her children Paris and Flynn into her movies from an early age, additionally documenting almost everything her son did. Repeatedly, Flynn asks his mother to turn her camera off, to the point where it becomes a running joke. This fealty to visual documentation plays like a benevolent version of the childhood scenes of Michael Powell’s “Peeping Tom.” As he ages, Flynn’s reactions to Meg’s omnipresent camera become mixed with equal amounts of frustration and bemusement.

Meg’s relationship with her son drives the narrative and keeps “Chef Flynn” interesting. Since she is our narrator, there’s credence to her statement that she feels as if she wrote this story. She is the driving force behind getting her son whatever he needs and supporting him in his unquenchable passion to be a chef in New York City. Her openness is a nice counterbalance to Flynn’s closed and somewhat secretive system of emotional engagement; like any adolescent, he plays those cards close to the vest. As a result, the film becomes equally about Meg and at times, she overshadows her prodigy.

For example, the most moving moment belongs to her: When faced with Empty Nest syndrome late in the film, Meg reflects on returning to her old filmmaking job after years of devoting her full energy to her son’s dreams. With a beautiful underpinning of maternal love, she thinks out loud about what she had become, and whether she is returning to what she once was. She doesn’t see her actions as any form of sacrifice, because they were just what supportive parents should do. I can’t imagine any parent not being affected by her words.

There is no question that Flynn McGarry is talented, as evidenced by numerous scenes of people enjoying his food or giving him props. But this film’s big set piece highlights my overall issue with it. Flynn gets to run a restaurant for a night, and as any restaurant owner would tell you, opening nights are magnets for disasters mild and major. Both types occur during this service.

The event is bumpy, and though Meg assures her son that his food received rave reviews from customers who did not leave, this is still Flynn’s first brush with failure. After all, this was the biggest crowd he had ever served, and unlike his early days cooking at home, he is now surrounded by professionals who are taking orders from him. The pressure gets to Flynn, but the film cuts away every time he understandably unleashes his inner Gordon Ramsay. I got the sense that the evening played out more dramatically—and uglier—than what I saw. That would have been more compelling, and most importantly, more adult. For a film whose subject rightfully demands to be seen as more than just a kid, “Chef Flynn” does way too much coddling. 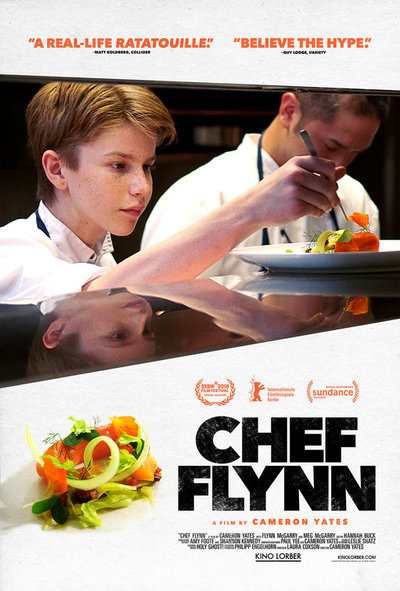 Flynn McGarry as Himself

Meg McGarry as Herself

Paris McGarry as Herself

Will McGarry as Himself