The words “Disney” and “animation” fit together so firmly in the public mind that a feature-length cartoon from any other studio has tough going. If it's not Disney, somehow parents don't feel automatically compelled to load up the family van and head for the multiplex.

Warner Bros. has been trying to change that perception, and its “Space Jam,” starring Michael Jordan and Bugs Bunny, was a box-office hit, even though it didn't break through the magic $100 million domestic box-office ceiling. Now the studio is back again, with “Cats Don't Dance,” a cute animated musical about Danny the Song and Dance Cat, from Kokomo, Ind., who hops on a bus to Hollywood in search of stardom, circa 1939.

The movie lacks the strong plotting and vividly defined characters typical of Disney movies, and it doesn't start with the death of one or more parents, which seems more or less obligatory in the genre. It plays, indeed, more like an animated version of an old Hollywood musical (there are elements of “Singin' in the Rain,” and the late Gene Kelly is credited with the film's choreography).

The opening is right out of countless show-biz tales. Danny (voice by Scott Bakula) arrives in Hollywood with a seven-day plan that starts with getting an agent and ends with getting the girl. He quickly discovers the hard facts of life: Animal actors aren't much in demand, and humans get all the best jobs.

He's lucky to land a one-liner (“Meow”) in a new musical by Darla Dimple (voice by Ashley Peldon), legendary heroine of Mammoth Studios, where the formula for a box-office hit is “Simple! It's Dimple!” He works the meow up into an entire routine and is in the process of stealing the show when an ominous presence looms high above him: Max, Darla's butler (lifted here, accent and all, from Erich von Stroheim in “Sunset Boulevard”).

Danny makes some new friends, including Woolie (voice by John Rhys-Davies), the elephant who serves as Mammoth's mascot and spends his off-hours playing piano in the gypsy caravan that doubles as his home. (There's nice animation in a scene where his slightest movement causes his home to tremble alarmingly.) And he falls in love with Sawyer (voice by Jasmine Guy, songs by Natalie Cole), a veteran feline actress. But after Max gets him all but blacklisted in Hollywood, he grows disheartened and starts to go back home--only to change his mind, return and star in a triumphant impromptu production number at the premiere of Darla's new movie. Even the dreaded mogul L. B. Mammoth (voice by George Kennedy) is won over.

This scene, which mirrors “Singin' in the Rain” by making a new star at the cost of an older one, is well-handled with a lot of energy. And Mark Dindal (“The Rocketeer”), the film's director, creates a fresh look for the animation: not Disney, and not Looney Tunes, but a touch of Betty Boop and Max Fleischer.

“Cats Don't Dance” is not compelling and it's not a breakthrough, but on its own terms, it works well. Whether this will appeal to kids is debatable; the story involves a time and a subject they're not much interested in. But the songs by Randy Newman are catchy, the look is bright, the spirits are high and fans of Hollywood's golden age might find it engaging.

Note: The movie's curtain-raiser is “Pullet Surprise” (say it out loud), a brand-new six-minute cartoon produced by the legendary animator Chuck Jones and starring Foghorn Leghorn. 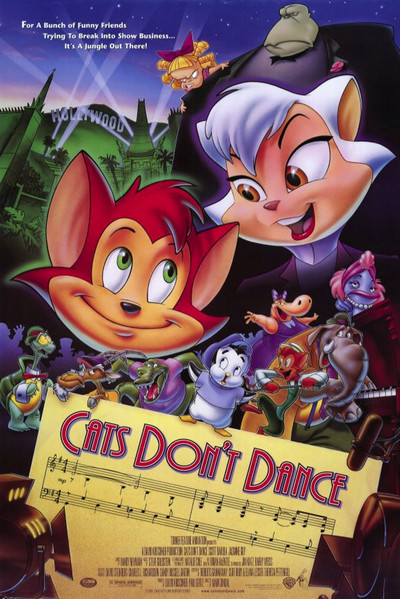