Catch the Fair One

"You think I remember their names?"

When this line comes, the audience has been well prepared for it, but it still knocks the wind out of you. In "Catch the Fair One," women and girls lured into a sex-trafficking ring are referred to collectively as "batches": "A new batch is coming in tonight." Nobody has names. The way the line is said, as though it's amusing to even think of the "batch" having names, opens up the abyss of evil—there is no other word for it—that is this world. "Catch the Fair One," directed by Josef Wladyka, and executive produced by Darren Aronofsky, tells the story of Kaylee (Kali Reis), a young Native American woman, a former boxer, who voluntarily joins a sex trafficking ring to find her younger sister, vanished without a trace some years back while walking home from the gym. "Catch the Fair One" is a revenge-thriller, and a satisfying one, since the evil on display is so total. However, the satisfaction is hollow. Hopelessness is the dominant mood. Human trafficking, and the epidemic of "disappeared" Native women, is such a massive problem it's hard to know where to even begin to address it or stop it. Shut down one ring, another one pops up. For Kaylee, vigilante justice is her only recourse.

Reis is a Native woman, and an actual world champion boxer in the welterweight division, as well as a champion for Native rights. She's active with the organization MMWIG (Missing and Murdered Indigenous Women and Girls), and uses her boxing skills to work with at-risk youths, teaching them strength and self-reliance. "Catch the Fair One" is a story close to Reis' heart. As Kaylee (a.k.a. KO), Reis exudes unmanaged grief and single-minded focus, a challenging mix. Kaylee was once a champ, but the disappearance of her sister Weeta (Mainaku Borrero) derailed her life. She fell into addiction. She lives in a shelter, busses tables at a diner, stealing customers' leftovers. She still goes to the gym, to meet with her trainer Brick (real-life boxer Shelly Vincent), and spar with men much larger than her. She sleeps with a razor blade tucked into her mouth, her pillow spotted with blood in the morning. Whatever she's training for, it's not your typical boxing match.

Kaylee thinks she has a lead on Weeta's whereabouts, so she meets the procurer of a local trafficking kingpin, and joins the next "batch." The "intake" process of these women is so upsetting it's difficult to watch. The worst part is the "kindness" and "gentleness" of the guy in charge (his voice may be kind, but his eyes are dead). He tells the women and girls to relax, but then shoots them up with drugs, and takes pictures of them for the "catalog." Apparently, there's a big market for "Native girls." It's stomach-churning. Kaylee's first assignment is with Bobby (Daniel Henshall), who drives a nice car, reminds her to buckle her seat belt, makes chit-chat, and then violently abducts her to pass her off to a guy paying big money for a "Native girl." Danny's father Willie (Kevin Dunn) heads up the trafficking ring, a wealthy man who owns a lot of land, including train yards, helpful to move "batches" of people in and out of the area.

Kaylee, tied up by Bobby, injured, is left no choice. Training with Brick at the gym, getting punched by those massive guys, a razor blade tucked in her cheek ... it was all to get her ready for this. When called upon to improvise, she does so swiftly, without hesitating. She makes mistakes. She thinks on her feet. Reis is untrained as an actor, but authenticity like hers cannot be manufactured or even "acted." Her body—strong, tatted up, focused—is the vehicle for her self-expression. She carries with her natural authority. When Kaylee sits down to grill Bobby's wife (Tiffany Chu, so good in "Ms. Purple"), she says, "I'm gonna ask you some questions." She has so much power she doesn't have to yell the line, or even make a display of her toughness. It would take a very strong will indeed to disobey her.

Shot entirely in frozen almost monochromatic upstate New York, cinematographer Ross Giardina captures the bleak desolation of this world, its low grey skies, the frozen ground, and often reverts to a God's-eye point of view, drone shots showing a teeny car driving on an isolated road, surrounded by thick forest, highlighting how far Kaylee is from civilization, from anyone who can help her. There are some thrillingly tense sequences, as Kaylee gets closer and closer to Willie, her ultimate goal. The revenge-thriller aspect doesn't quite mesh with the urgent issues "Catch the Fair One" exposes. The "Taken" franchise, for example, can afford to be thrilling just for the sake of being thrilling. It isn't attempting to "address" any real-world issues. The world in "Catch the Fair One" is so ugly, so evil, that even personal revenge pales against the enormity of the problem.

But the human cost, the impact of trafficking, particularly on the Native population, is in Reis' face, in her every move. The ugliness Kaylee confronts, the cruelty she experiences, is worse because she pictures her sister having to endure it. Weeta is out there somewhere, all alone, drugged, trapped. And not just Weeta, but thousands of others. They all have names. 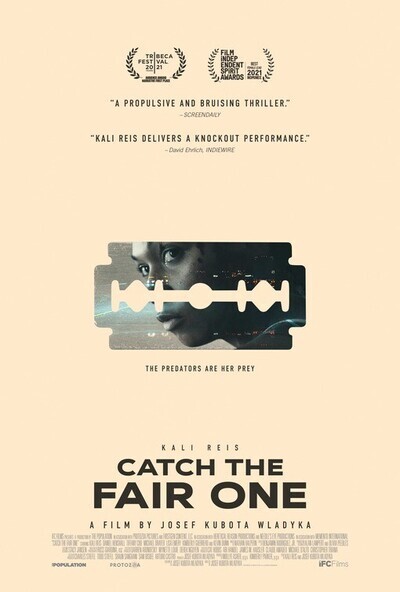