In the annals of great road-trip movies, there have been several standouts that feature a man and a woman as incompatible travel mates who turn out to be meant for each other.

“It Happened One Night.” “Smokey and the Bandit.” “The Sure Thing.” Even “The African Queen” qualifies, despite being waterbound. They all tend to follow a similar route. First, two strangers meet and instantly get on each other’s nerves. Then something happens to draw them closer. And, before you know it, they are falling in love. What sets these films apart from one another are the rich details that define the relationship as it blossoms and the chemistry between the actors.

The makers of “Cas & Dylan,” a Canadian production, might think they are using the same map as these predecessors for their plot even as they keep matters strictly platonic. Certainly, they have the makings of a generational clash with their protagonists. On one hand, there is Cas Pepper, a portly white-haired Winnipeg doctor (Richard Dreyfus) with terminal cancer who decides to drive to Vancouver to live out his final days. On the other hand is Dylan Morgan, a flibbertigibbet of a 20-something female (Tatiana Maslany of TV’s “Orphan Black”) who thinks hanging around hospital wards filled with people in pain is a good way to become a writer.

But the story ends up being one wrong turn after another. A GPS hasn’t been invented that could get this plot-hole-riddled script back on track. “Cas & Dylan” isn’t so much a road trip as roadkill—flat, lifeless and faintly odiferous. That the misbegotten effort is the feature directorial debut of Jason Priestley, the onetime heartthrob from the long-running ‘90s TV series “Beverly Hills, 90210,” just makes matters worse. Who wants to beat up on Brandon? Wasn’t dealing with co-star Shannen Doherty all those years punishment enough?

But beat we must. Matters go awry right out of the gate when Dylan’s gun-toting dolt of a boyfriend shows up and suddenly a quick trip home turns into a getaway in a used orange Volkswagen Beetle convertible. First, there is the sitcom-y dialogue. “Are you a philanthropist?” asks Dylan of her taciturn companion. “Because I am a philanthropy. I’m more than happy to have money thrown at me.” Says Cas in a low grumble: “That’s called a stripper.”

But as it turns out, verbal diarrhea is the least of Dylan’s off-putting traits. She lies, shoplifts, smokes, snoops,  mooches and disses Cas’ love of bluegrass music. Her idea of fun? Asking a gas station worker if their beef jerky comes in kosher before purloining a packet of said food item. Throw in her misguided fashion choices and it is as if she adopted Madonna’s character in “Desperately Seeking Susan” as her role model. She also pesters Cas about helping him as he struggles to pen a suicide note. “So what would you say your theme is?” she inquires a bit too cutely. “Regret? Unrequited love?” Cas replies dryly: “Death. The theme is death.”

As for the film, it meanders along with random stops without anything truly interesting happening save for one incident involving a dog. An overnight stay at a motel leads to Cas making his famous pasta sauce for Dylan. A swerve off the road causes them to visit a repair shop. A sweet old lady invites them to her home for dinner. Dylan spikes Cas’ coffee with a drug that causes him to think that donning a long flowing blond wig and howling like a wolf is a good idea. Along the way, we are supposedly gaining insight and wisdom about how best to live and to die. But, mainly, we are discovering how a 90-minute movie can feel twice as long.

Now about the actors. Dreyfuss can do irascible in his sleep and should be commended for at least never visibly letting on that “Cas & Dylan” is as pointless and shallow as it is. He at least tries to elevate some of his scenes to acceptable levels—although the wig gag is beyond hope. As a huge fan of “The Goodbye Girl,” I was actually tickled by his delivery of his character’s list of rules regarding car conduct after he catches Dylan pulling a fast one: “No smoking. I pick the music. No talking...ever!” It reminded me of when he similarly tells off soon-to-be-roommate Marsha Mason in the 1977 comedy that earned him an Oscar. Of course, Neil Simon wrote that script. And no one from a teen-bait TV show directed it.

Dreyfuss has survived worse. But Maslany, who can be quite a smoking-hot pistol onscreen when she isn’t being an annoying chatterbox and fared much better as the young Helen Mirren in “Woman in Gold,” is a star on the rise. This lingering relic from 2013 is the last thing she needs on her resume right now.

Sad to say that sticking around until the end will not reward you with any surprises that you didn’t see coming, save for one involving a phone answering-machine message. If it is any compensation, you do get to see Cas’ recipe for his amazing pasta sauce. The surprise there? No tomatoes are involved. But instant coffee is. 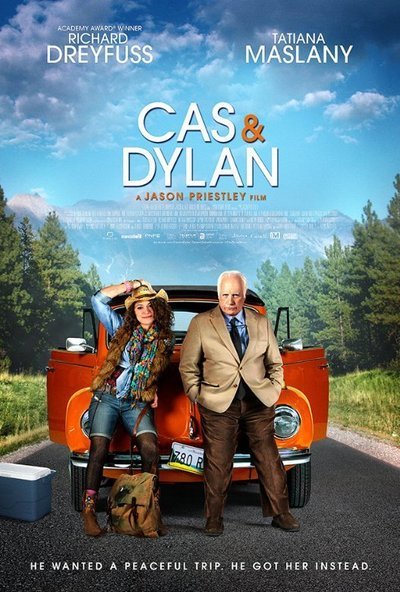