Careful What You Wish For

Elizabeth Allen’s generically titled thriller, “Careful What You Wish For,” plays like a painfully stilted high school production of “Fatal Attraction.” In his feature film debut, Nick Jonas may have the body of a man, but he still has all the acting range of a Mouseketeer. After the picture reaches its “Usual Suspects”-style twist, accompanied by the typical series of frenzied flashbacks straining to illustrate how a preposterous plot point was hinted at all along, Jonas merely lets out a petulant huff, as if his cat just ate his homework. This sort of half-hearted emoting wouldn’t be good enough for student-run Winter One Acts, let alone a suspense film worthy of an audience’s investment. How can one be in suspense over the fate of characters as thoroughly unconvincing as these worthless ciphers?

Jonas plays Doug, a slab of sculpted man-meat whose virginal doe-eyed innocence is as improbable as his character’s alleged youthfulness. He’s supposed to be a teenager smitten with a much older woman, Lena (Isabel Lucas), though the seven-year age difference between the actors hardly matters, since they look roughly the same age. Despite the fact that Doug is spending his summer on a beach overcrowded with potential mates, he can’t help but pursue the wife of his slimy neighbor, Elliot (poor Dermot Mulroney). While working to fix up Elliot’s boat, Doug’s eyes drift toward Lena, whose nude body is clearly visible between the slats of an outdoor shower. Suddenly, Elliot materializes before Doug and asks, “Did you check her out?” He means the boat, of course.

It doesn’t take a film expert to predict where this plot is headed, since it is comprised entirely of borrowed fragments from countless better movies. We’ve all seen the scene where a guy sizes up his rival and replies, “You remind me of me.” Or the tense moment when a character cautions, “You have no idea what he’s capable of.” Or the uneasy sequence where lovers must pretend to meet each other for the first time, while in the presence of family members. Or the annoying comic relief provided by the protagonist’s best friend, who seems far too interested in getting his buddy laid, while remaining oblivious to all impending danger. However, I’m not sure if I’ve ever seen a best friend as ludicrous as Carson, played by Graham Rogers as if he just met Jonas seconds before the cameras rolled. After Doug confesses to committing a horrific crime, Carson tries to lighten the mood by quipping, “Been lying to you, too—been bangin’ yo momma. [Pauses for canned laugh] Just kidding.”

According to IMDb, the screenwriter Chris Frisina was schooled at Dartmouth College by John Michael Hayes, the Oscar-nominated scribe of Hitchcock classics such as “Rear Window,” while director Allen has had modest success with family fare (“Aquamarine,” “Ramona and Beezus”). “Careful What You Wish For” is the worst possible melding of their sensibilities, a Z-grade Hitchcock knockoff crossed with a Disney Channel Original Movie. This is the sort of embarrassment tweens throw on at a sleepover so that they can talk over it, while occasionally rewinding key moments to ogle the stars. 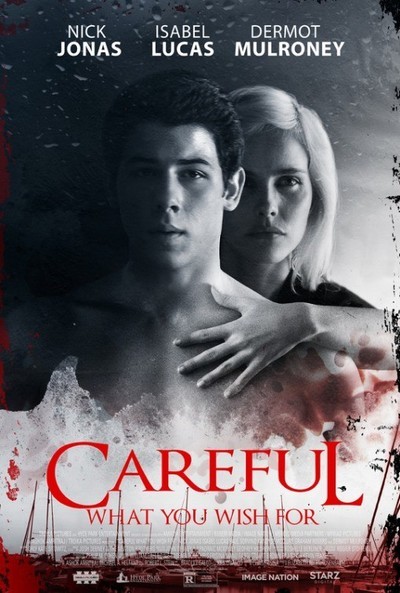 Rated R for some sexual content/nudity and language