Can You Keep a Secret?

“Can You Keep a Secret?” starts with a word vomit meet-cute that’s a stretch, even by the standards of romantic comedies that force themselves into action. Emma (Alexandra Daddario) thinks she is going to die during a bit of plane turbulence, and nervously spews her secrets to a handsome strange man (Tyler Hoechlin) sitting next to her. The secrets aren’t very juicy, so much as set up what in her life needs addressing: the fake friendships she has with her snooty co-workers, the sexual inefficacy of her jazz-loving boyfriend. Amongst her nervous spewing, she even proclaims, "I’ve never been in love!" while the man listens with a small smile creeping on his face. Emma tries to stop herself at one point, but he encourages her to keep going. It’s the start of a connection that isn’t sweet or clever enough to look past the predatory nature.

The next day, Emma gets to her hip New York City office and realizes that the owner of her employing company, Jack Harper, is none other than the man she rambled to. Horrified, Emma fumbles around trying to play it cool, while the other members of the office try to impress him, creating awkward nervous slapstick by Daddario and weak jokes from the supporting cast—even Laverne Cox is wasted as the office manager, trying to run a tight ship and prop herself up in the process. Director Elise Duran (working from a script by Peter Hutchings, an adaptation of Sophie Kinsella's novel) flashes back to other stuff she innocently revealed about her work ethic—like how her friend Casey (Robert King) asks her to “go over some numbers,” AKA sneak out for coffee—and Emma is embarrassed, vulnerable. In a different scenario, her boss could fire her if she got caught doing what she's already confessed to doing.

But Jack has something else in mind for this employee, concealed under the way he encourages her to check those numbers with Casey, or doesn’t tell one of Emma’s co-workers that she didn’t actually read as part of the book club. “Can You Keep a Secret?” tries to leverage this boss-worker dynamic by giving Jack his own secret—he doesn’t know want people to know that he was flying back from Chicago when she first met him—and Emma readily proclaims that she won’t tell anyone. His secret, later revealed, also isn’t scandalous, even if the script tries to nudge you on your worst inclinations on why a man would hide a plane trip, and sometimes steal away to answer his phone.

Hanging this premise on the currency of secrets proves far too simple, even for the lovingly unabashed Merry-Go-Round thrills of a rom-com. That’s especially the case when the movie gets to its main point, when Emma finally breaks it off with her dorky boyfriend, and Jack swoops in in a way that isn’t romantic so much as predatory, given that even the most necessary of break ups can leave someone in a vulnerable state. But once the two start dating—with Emma getting encouragement from her roommate Lissy (Sunita Mani), and deflecting stuff from her far more cynical roommate Gemma (Kimiko Glenn)—we can tell that it’s a mismatch. She’s full of life and genuine, and shares a backstory of fighting for self-love that is totally endearing, vivid. But Jack, on the other hand, is a milquetoast Christian Grey with a masculine forcefulness that’s merely to be presumed by his rugged face and rock-hard abs. Jack doesn’t share much about who he is as Emma gets closer to him, and his intentions are too vague. The secrecy doesn’t make him mysterious, so much as a three scoops of vanilla with a red flag on top.

In one moment of bliss, before everyone's secrets come out in a way that’s endemically dull, the movie achieves a few pangs of romance: When it’s about that feeling of falling in love, it feels true—of stealing a look at your partner while sitting together quietly on the couch, or baring your soul to someone special at some unknown hour of the night, in bed. These glimpses pass in a montage, but there’s enough sweetness to show you what could have been.

Pushing itself along as a comedy, Daddario doesn’t nearly get the material that can match her abundant energy and natural embrace of goofiness, which she displays from the opening scene, trying to make this line sound like it's not a genre staple: “I have to land this account to get this promotion!” But she is the one interesting character in the whole bunch. Everyone else is either not realistic or silly enough, and we’re stuck with a lot of stale jokes about effeminate men, wacky co-workers, and later a sequence about amateur ballet dancers.

“Can You Keep a Secret?” doesn’t elicit warm laughs so much as heavy sighs, even though the film has some zippiness—there’s a slapstick spirit to the movie that doesn’t shine because the jokes are plain, the couple is tough to root for, and the general tension behind this weird situation is on the lazier side of rom-com premises. Romance is hard, and comedy even more so, but “Can You Keep a Secret?” too openly tries to skip through both. 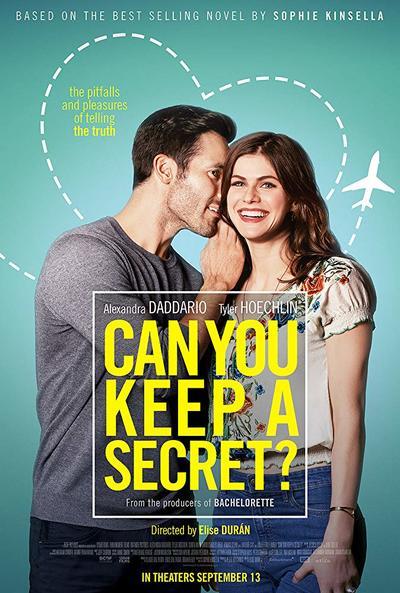