Ruth Finley debuted her Fashion Calendar in 1945. The idea was simple: create a calendar listing all the different fashion events happening on any given week in New York City. Finley had no way of knowing that Fashion Calendar—with its red cover and pink pages (designed to be easily visible on an editor's messy desk)—would become a staple of the New York fashion world for decades. Finley maintained her calendar for almost 70 years, working out of a small office, with two employees. In 2014, she finally sold it to the CFDA (Council of Fashion Designers of America). She basically retired at the age of 95. Christian D. Bruun's fascinating documentary "Calendar Girl" follows Finley as she closes up shop in 2014, readying for the calendar transfer. A tiny smiling dynamo, Finley still attended New York Fashion Week every year (as many shows as she could get to), and is a legend in that small world. "Calendar Girl," an engaging and sneakily profound film, explains why.

Subcultures create their own rules, and operate in ways mysterious to the outside eye. If you're not part of the subculture, the nut-and-bolts of its machinations is obscured. Fashion Week happens to the outside eye as if by magic. If you live in New York, you know when it is (even if you're not attending), and you know that the Bryant Park area is to be avoided if you don't want to get bogged down in Fashion Week trucks and crowds and tents. "Calendar Girl," then, is revelatory about the role Ruth Finley played in making sure Fashion Week ran smoothly. She was the one designers turned to first if they had issues with scheduling. Finley put together the schedule for all of the shows, many of which happen simultaneously. If you were an up-and-comer, you didn't want your show to happen opposite Bill Blass' show. Finley kept such things in mind. She would re-arrange things so everyone could have their moment to shine.

"Calendar Girl" features a veritable army of well-dressed talking heads, fashion editors, fashion legends, people like the late Bill Cunningham, and fashion designers (Carolina Herrera, Thom Browne, Nicole Miller, Tadashi Shoji, Betsey Johnson), all of whom speak of Finley's influence and importance. The "talking head" format is a little monotonous, but in this particular case, it is essential. If you're not in that world, it's hard to understand how a mimeographed calendar could rise to such importance. The "talking heads" tell you about it from their own personal perspective. It's like an oral history. This oral history style leads directly to the deeper themes: the world in "Calendar Girl" may be high-fashion, but it was a small world, a cozy world even, where personal relationships were everything. What do we lose when we lose that personal touch? Diane von Furstenberg said that when she was planning to debut a new collection, Ruth was the first person she'd call.

Ruth Finley always knew she wanted to have a career, setting her apart from her peers as well as societal expectations. Her father supported her in her goals, her mother not so much. Finley worked a couple of jobs after college, before landing a gig as a Girl Friday for the legendary fashion publicist Eleanor Lambert. This was the start. Finley watched the fashion season unfold, and witnessed the confused PR teams and press try to figure out how to cover what, and she realized the need for a centralized calendar, distributed to all. From the start, Finley refused advertising. The calendar was agnostic. It didn't play favorites. The calendar did not "roll with the times," and Finley was very slow to accept that she needed to move the calendar online. She worked off of a battered rolodex, and kept boxes of index cards laying around. As Fashion Week exploded into the tentacled-monstrosity of its current form, analog was just not going to cut it.

This history is provided in "Calendar Girl," all as Bruun follows 2014-Finley around to fashion events, a birthday dinner, a visit with her boyfriend, but also as she sifts through the 70 years of history in her office, preparing for the transfer to CFDA. Finley is such a cheerful woman, with a positive outlook on life. She raised three sons by herself, after being widowed at the age of 39. She was a single working mother in the 1950s, almost unheard-of. Finley died in 2018, at the age of 98.

It was heartening to see that the Library at the Fashion Institute of Technology in New York acquired Finley's calendar, all 69 years of it. The archive will be well taken care of by FIT. It's "just" a calendar, but in its pink pages you can track the history of an industry. David Benjamin, an independent archivist, explained why the collection is "historically significant": "It's what we call a 'unique collection'. This body of material does not exist in any archival or cultural repository in the world." The calendar will not be subject to the whims of the internet, where information has a way of vanishing, where links go stale, where site redesigns means entire archives are lost (or at least no longer easily find-able). Go to Wikipedia and count all the dead links. Finley's calendar will be an indispensable resource for generations to come. 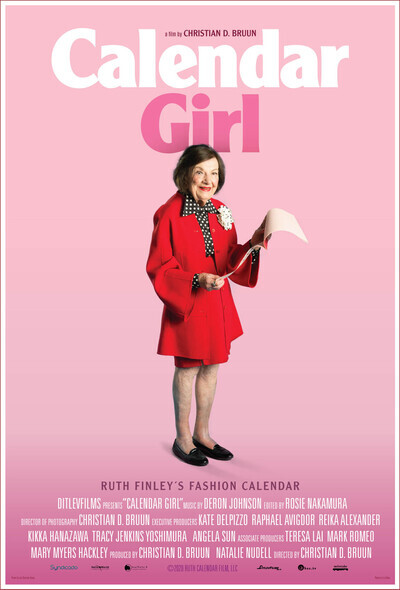