It's hard not to compare the new Filipino siege drama "BuyBust" and the Indonesian siege drama "The Raid," especially since the two films share some of the same producers. The main difference between the two films—both of which follow a tough, entrenched Good Cop as they try to extricate themselves from a drug bust gone wrong—is that "BuyBust" isn't so frequently inspired in its choreography that it can get away with its substantial brutality.

In fact, "BuyBust" is so often bogged down by pseudo-naturalistic long takes and generic cop/robber power dynamics that it makes one wonder what the point of watching such a film is. Impact seems to be the thing, as we often see in any scene that climaxes with a shower of blood. That's nothing new for contemporary action films," but "BuyBust" simply isn't as relentless or innovative in its action filmmaking as superior recent films like "The Raid" or "Dredd." There's too much dead air and too many monotonous set pieces in "BuyBust," yet another action movie that conflates physical endurance with moral integrity.

Pinoy star Anne Curtis plays Manigan, the rebellious, tough heroine whose intuition (and previous work experience) tells her that she's being led into an ambush by Dela Cruz (Lao Rodriguez) and Alvarez (Nonie Buencamino), her two commanding officers in the Manila police department's narcotics division. Curtis's performance is strong enough to make Manigan initially seem like more than a garden-variety Ripley clone. Director Erik Matti ("On the Job") also deserves credit for highlighting the sensitivity in Curtis' performance through a handful of effective close-ups.

But then the plot (such as it is) kicks in, and "BuyBust" rushes Manigan and her team into its main setting: the claustrophobic, labyrinthine slum that big-time drug dealer Biggie Chen (Arjo Atayde) calls home. This cocktail napkin sketch of a story should be familiar to anyone who has seen films like "The Raid," "Assault on Precinct 13," or "Rio Bravo." But that familiarity shouldn't really matter. All we need, as viewers, is to be immediately put in our heroine's head-space/plight.

Unfortunately, it seems that filming in such a confined space put a serious damper on what Matti and his collaborators could do. There are a handful of compelling action set pieces, but most of these are tellingly shot from on top of tin-roofed shacks that are sandwiched together and connected via crooked, spiderweb-thin alleys. Many action scenes that are both set and shot on the ground—ones that primarily rely on gunplay and some martial arts—aren't as dynamic, owing partly to Matti's emphasis on frantic motion and physical strength over athletic prowess. Matti's focus on energy over gracefulness is especially unfortunate since one of the most visually compelling sequences in the film is a showcase for Manigan's mountainous colleague Rico (Brandon Vera), a charismatic giant of a man whose bald head and massive physique brings wrestlers-turned-actors like Dave Bautista and Dwayne Johnson to mind.

Matti and co-writer Anton Santamaria also sometimes draw viewers into yet another mystery plot where a beleaguered cop must find and bring to justice the mole that endangered her team. But only sometimes. I was especially fond of the brief, but satisfying sequence where Manigan asks a disaffected civilian if she can use his home phone, and he frankly tells her that even if he could (Chen's guys are using a cell phone blocker), he wouldn't since Manigan cannot, in good faith, promise him that she'll protect his family. It's an un-sensational, small moment, but a good one.

Most of the rest of "BuyBust" is sadly not as thoughtful. There are a lot of slow, poorly paced fight scenes that aren't really fun to look at, or think about. And there's even more waiting, and stalking, and even some walky-talking, and it's often drab and unmoving.

Really, the film's nature as a sensationalistic piece of noir-ish pulp story-telling wouldn't be an issue if so much of its plot wasn't so plodding, by the numbers. But it is, right down to Manigan's inevitable showdown with Chen, yet another scene where a proudly immoral villain boasts about moral relativity.

Which left me wondering: why am I watching yet another movie where a hero's worth is determined by how much physical damage she can sustain? I enjoy a fair amount of gory entertainments, and certainly knew "BuyBust" was a body count film when I sat down to see it. But that didn't lessen the rote, numbing effect that the film's violence had on me. I guess it's only a matter of time before even the most unabashed action film buff starts to feel worn down by programmatic beat-'em-ups. "BuyBust" may be that point for me—until the next "The Raid" comes along, anyway. 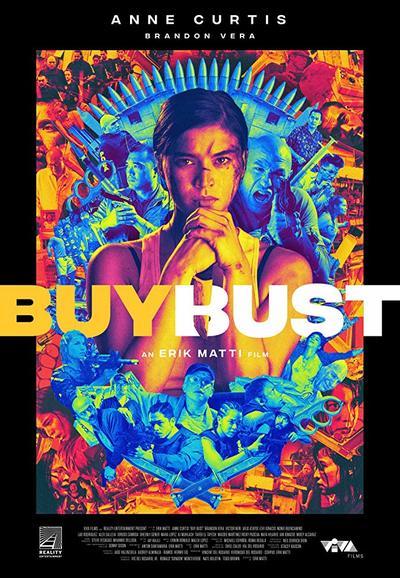