This movie will lose the goodwill of any longtime New Yorker watching it within the first ten minutes. Under the opening credits, there are a series of relatively pleasant helicopter views of Brooklyn, starting from the shores of Coney Island. But these grow more sinister as we note the presence of a machine-gun barrel in the bottom of the frame. Yikes. Then: cut to an underground subway station. Church Avenue, service by the G and F lines, as the visible signage shows. Lucy, played by Brittany Snow, is wending her way to the exit, with her milquetoast boyfriend, played by Some Dude™. They’re mildly concerned because there doesn’t seem to be anyone around but otherwise are feeling jokey about milquetoast boyfriend’s impending introduction to Lucy’s grandmother. Their reverie is interrupted by a screaming man, his body entirely on fire, running down from the subway’s street level stairs.

(Side note: I know that screaming-man-on-fire is a favorite shock effect of hack filmmakers the world over, but “stop drop and roll” is a real-life thing, unlike “shooting zombies in the head is the only way to kill them,” which is only a movie thing. Stop, drop and roll works. I once set my entire forearm on fire in a lighter fluid mishap, and I stopped, dropped and rolled instinctually, and it worked! Why don’t more movie characters try this?)

Now sensible people might react to this sight by going back down to the track level and getting the next train to somewhere else, but Lucy and milquetoast boyfriend have to check out the situation, because apparently Grandma is hung up on punctuality. No sooner does milquetoast boyfriend get to the sidewalk than he too is incinerated. Lucy, whose grandmother must be really very strict, goes to the sidewalk anyway, to see an overturned flaming Mr. Softee truck, and varied parties shooting and blowing stuff up.

So she runs, and is pursued into a basement by two street menaces. One is white, or white-ish, while the other is black. For balance. Although the black one ends up being the more sexual-assault-menacing one. Interrupting this unsavory bit of race-baiting is Dave Bautista, an ex-Marine named “Stupe,” who owns the basement in which the rape is considered. He dispatches the villains briskly, but he’s not particularly friendly to Lucy, at least not at first.

As for the thing that will have New Yorkers checking out: When Lucy comes out of the subway station, she is indeed in the Bushwick neighborhood of Brooklyn; she runs past Jefferson Avenue’s fabled Owl Juice Pub and other landmarks. Only problem is that the Church Avenue station from which she supposedly emerges isn’t anywhere near Bushwick. Lucy later tells Stupe that she came in on the L train; as seen on the signage at the beginning of the movie, the Church Street station services the G and F.

What’s the big deal? Ask Martin Scorsese. He has recounted in several interviews how nuts it used to drive him, in old Hollywood movies, to see a couple turn a corner in Greenwich Village and wind up strolling down the Brooklyn Heights Promenade. But there’s a deeper problem at work. Nick Damici and Graham Reznick, the screenwriters, seem to have based their portrayal of this transforming neighborhood in the county of Kings entirely on viewings of that old sensationalist TV cop drama “Brooklyn South,” which worried parents used to cite to their children when they wanted to dissuade them from moving to the borough.

Additionally, they seem to have written their dialogue by typing out “We gotta get the f**k out of here!” into their Final Draft document, copying that, and then pasting it onto each page, two or three times. For some reason they have crafted an inadvertently hilarious exchange between its two main characters: “Where are you going?” “Hoboken.”

Lucy is an entitled, petulant dolt whose most interesting trait is that she doesn’t go into shock despite conditions that would put her there multiple times. Stupe is a stock Bautista type: taciturn, grunty, all that. He’s an ex-Marine who’s supposed to have Rambo-esque skills (and of course somebody makes a point of mentioning the Stallone character, for “verisimilitude,” I guess), but when he deigns to teach Lucy how to use a gun, he never shows her where the safety is.

The movie’s main feature is a group of long-take, moving-camera action scenes that I guess might have been more engaging had the characters on the run and in battle been figures you wanted to spend any time with. They’re not. These set pieces are either getting much easier to do, or they are the sole talent of co-directors Cary Murnion and Jonathan Milott, because the filmmakers distinguish themselves in precisely zero other ways. The obnoxious, opportunistic premise is a menace-from-within scenario that’s laughable even in the wake of certain current events. The numbskull faux nihilism of the ending is possibly intended as a homage to a recently departed horror movie director, but it’s more like a callow insult. 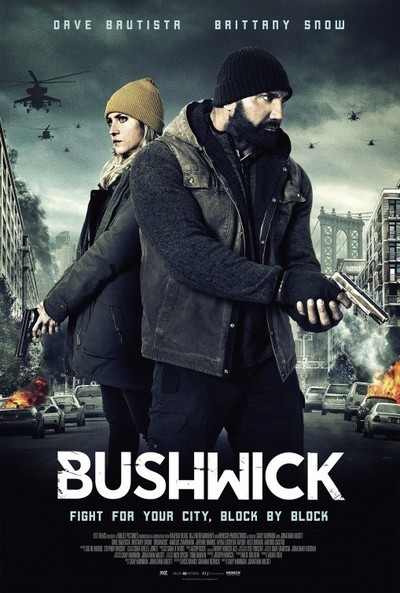