Maybe it’s my theatre background but I’ve always been a sucker for single-setting thrillers. There’s something about the claustrophobic tension amplified by a piece that never leaves one location, forcing the characters and their increasingly stupid decisions to tell the story in a confined space. From “Rope” to “Bug,” film history is full of single-setting dramas, and Mike Gan’s latest, “Burn,” is a better-than-expected entry in the subgenre. Some of the choices strain credulity and the biggest name in the piece, Josh Hutcherson, feels miscast, but this is a film that kept me uncertain of what would happen next and affirms Gan as an interesting young filmmaker to watch.

Melinda (Tilda Cobham-Hervey) is, to put it politely, a bit eccentric. She works at a gas station with a mean girl named Sheila (Suki Waterhouse), who basically mocks her quirky co-worker with cruel abandon. Is Melinda just a misunderstand wallflower or is there something darker underneath that overly-nice surface? When she starts doing things like dipping her finger in the freshly-brewed coffee to feel the burn, suspicion that she may more than just an oddball rises. It feels like Melinda is waiting for a spark to ignite something truly dangerous, and that she could break if Sheila bullies her one more time.

The match dropped into this powder keg is Billy, played by “Hunger Games” co-star Hutcherson, a generally solid young actor who doesn’t quite fit the part here. Billy is supposed to be a desperate, sweaty, reckless criminal, and he holds Sheila and Melinda up at gunpoint, telling them that he needs all the money they have to pay some mysterious biker criminals. To be fair, Gan leans into the unexpected casting by having Sheila basically doubt Billy’s criminal behavior. He’s not going to shoot her. He doesn’t seem like the type. In fact, Melinda trusts Billy so much and hates her life to such a degree that she’s instantly drawn to him. And then things go very wrong.

Cobham-Hervey finds that unsettling balance for Melinda that’s really the heart of the film. Is Melinda just misunderstood and unlucky? Or is there something dark and dangerous underneath that welcoming demeanor? She finds the edge of that place in which insecurity and depression can lead to dangerous decisions and then she stays there. As Melinda makes more and more mistakes, including some choices that lead to tragedy and criminal behavior on her part, the tonal balancing act of this character becomes even more impressive. Even as I wasn’t sure that I completely bought what Melinda was doing, especially in later scenes, I remained fascinated by her, and that’s a testament to Cobham-Hervey’s performance.

As for Gan, the director of this month’s “Into the Dark: School Spirit” proves to have more visual acumen here than he did in that Hulu Original. A lot of filmmakers have a tendency to get flashy when they’re stuck in one location, as if finding new angles from which to shoot the same room inherently makes it more cinematically engaging. Gan deftly lays out the geography of his space, giving us the feeling that we’re in the same building as Melinda, Sheila, and Billy, and refusing to overcompensate with filmmaking or editing tricks like so many other filmmakers would. “Burn” is a visually restrained film and it’s stronger for it.

“Burn” starts to sag around the hour mark, belying the fact that it probably would have worked better as a short film, and contains one particularly violent act near the end that I didn’t quite believe and isn’t well-executed cinematically. However, that’s not what I’ll remember about “Burn.” I’ll remember a movie with a confident young director and memorable young star, both of whom I want to see working again soon. And I’ll admit to being a little partial if it’s on another single-setting thriller. 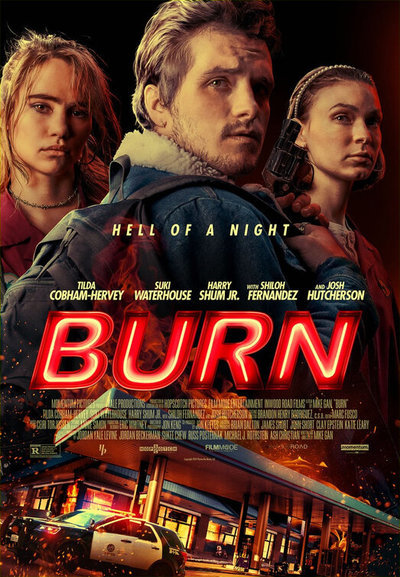