Into the Dark: School Spirit

A knock against Hulu’s series of original horror films under the banner of “Into the Dark” has been that most of them haven’t been, well, scary. There have been some interesting thematic explorations, performances, and ideas, but actual fear has been in short supply. When the latest, “Into the Dark: School Spirit,” opened with a brutal murder of two teenagers in their own school, I thought that we might actually get a legitimately frightening chapter of “ITD,” or at least one that tried to be. Sadly, “School Spirit” doesn’t quite fulfill its promise, downright refusing to build tension for nearly an hour, and feeling flat in terms of composition and dialogue. Some chapters of “Into the Dark” have been disasters from the beginning – this is more the case of something that almost comes together but never connects the dots.

When the “Into the Dark” project began and it was revealed that every original film would center on a different holiday, I wondered which one they would use for August given, well, it has no real holidays. No, they didn’t go with National S’mores Day or World Mosquito Day – maybe next year – choosing to stretch the definition by going with a “Back to School” concept. (I guess that is kind of a holiday for parents.)

The pitch for “School Spirit” could be “The Breakfast Club” meets “I Know What You Did Last Summer.” Early in the school year (really just so it can kinda sorta maybe be in August), a collection of kids is stuck serving Saturday detention. The kids include friends Lizzy (Jessi Case) and Russ (Philip Labes), tough guy Vic (Julian Works), the awkward Brett (Corey Fogelmanis). The only authority figure is the Vice Principal Mr. Armstrong (Hugo Armstrong), who hates that he has to be there on a weekend and is a barely functioning alcoholic. Finally, there’s a girl who really shouldn’t be there named Erica (Annie Q.), who also happens to be the first soon-to-be graduate of this school to go to Harvard and doesn’t really belong in detention. How goody two-shoes Erica ended up in detention with the slackers is one of the early mysteries of “School Spirit,” but that’s quickly overshadowed by the murdering.

It turns out that the urban legend about a figure dressed up like the school’s mascot, an Admiral, who happens to murder people is true. For the first two-thirds of “School Spirit,” co-writer/director Mike Gan plays a classic ‘80s/’90s slasher pic game in which characters wander off and die, but the students aren’t let in on the game for too long, leading to a movie that takes too long to get to actual tension. It’s a film that can’t quite find its tone. At first, it feels almost like a slasher spoof, such as when the killer has to use a paper cutter three times to get a teen victim’s head off, or the brutal way in which a basketball player is eliminated, but Gan and company don’t quite commit to that tone enough. In terms of dialogue, it’s just a notch flatter than you want it to be, and several notches flatter regarding visuals. I understand filming on a budget, but if a bit more had been put into the design and cinematography, the project could have had a sense of visual dread that makes up for the lack of it in the narrative.

Not only are there decent ideas in “School Spirit” that just feel like they’re a production meeting or two undercooked, there’s a really solid performance at the center. Annie Q. is very convincing as Erica, a girl who has struggled to be perceived a certain way her entire high school career but is deeper than her yearbook profile might lead people to believe. Without spoiling anything, “School Spirit” becomes a story of false impressions – another theme I wish was explored more before the twist ending – and Annie Q. is the main reason it works as well as it does. It doesn’t quite get a passing grade, but it’s close to the top of the class for “Into the Dark” if we’re grading on a curve. 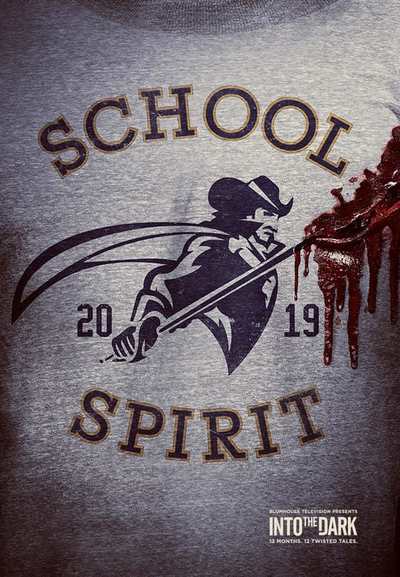