Six in the morning, police at my door
Fresh Adidas squeak across the bathroom floor
Out my back window I make an escape
Don't even get a chance to grab my old school tape.
I'm a self-made monster of the city streets
Remotely controlled by hard hip-hop beats
But just living in the city is a serious task
Didn't know what the cops wanted, didn't have time to ask.
-- Ice-T, "6 'n the Mornin'"

The relationship between the LAPD and Los Angeles' African-American community—particularly in South Central—is the subject of Sacha Jenkins' documentary, "Burn Motherfucker, Burn!", especially relevant as we near the 25th anniversary of "the Foothill Incident,” i.e., the beating of Rodney King in 1991. As with school shootings, these "incidents" happen with such depressing regularity that they rarely warrant front-page news anymore. Counteracting that cynical apathy is the vibrant Black Lives Matter movement, and the galvanizing force of social media, all of which shine a constant spotlight on the issue of racism and police brutality. Jenkins attempts to break down the various intersections of cultural and social history in Los Angeles that helped create such a constantly-exploding powder keg.

Jenkins has woven together an impressive archive of extant footage going back to the 1940s and '50s, when large groups of African-Americans moved to California from the Southern states (and elsewhere), in search of better opportunities, more freedom, less oppression. The freeway system encouraged the mobility of all LA residents, but the LAPD—supported by the Los Angeles power-structure—was invested in keeping the black neighborhoods isolated, cut off. This is a huge and complex topic in and of itself, and deserves more in-depth exploration than occurs here, but Jenkins has used his diverse group of interview subjects (historians, activists, lawyers, Watts residents) as witnesses and expert guides, who lay it out for us beautifully well. People like Connie Rice, Danny Bakewell, Aqeela Sherrills, Mike Davis, Congresswoman Karen Bass, and more provide texture, context, and personal memories to the well-known historical events Jenkins covers.

The 1965 Watts uprising ("It wasn't a riot," says Bakewell, "It was a rebellion against oppression") was one of many across the country in the second half of the 1960s, when city after city exploded in violence. Something like Watts in 1965 does not come out of nowhere. After the April 1962 gunfight at the Nation of Islam Mosque in Los Angeles, where black men were shot by cops through the genitals (among other atrocities), Malcolm X gave a speech, saying, "If he's not ready to clean his house up, he shouldn't have a house. It should catch on fire and burn down." The footage of the Watts uprising, though familiar, is terrifying, and told through multiple viewpoints, those who lived in Watts, those who worked the cop beat that day. There's footage of the National Guard rolling into town, and signs put up at the end of streets that warned motorists: "Turn left or get shot." Store owners spray-painted messages to looters on their storefronts, one being: "Negro Owned. Brother let me live."

William Parker, the notorious police chief of the LAPD from 1950 until his death in 1966, the man responsible for militarizing the police force, plays a major role in all of this, for obvious reasons, but also because his protege—Darryl Gates—was police chief at the time of the Rodney King beating. Gates stepped down in the wake of the uproar following the acquittal of the LAPD officers involved in King's beating. But Gates' reign could be seen as a continuation of Parker's reign, with the same implicit and explicit racism, the same deadly use of force. One of the interview subjects makes the point that after Gates stepped down, the LAPD named Willie Williams as the next police chief, who had been the police chief in Philadelphia. The system was so corrupt and Parker-ized that they couldn't even recruit from "their own."

Another fascinating element in the documentary is Jenkins' examination of the cultural life of South Central. It's such a welcome addition, and a hugely important part of any telling of this particular slice of history. Oscar-winning screenwriter Budd Schulberg formed the Watts Writers Workshop in 1965 after the uprising, and along with that came an artistic resurgence, poetry clubs, painting classes, a rich music scene. With the '80s came the rise of "gangsta rap," and songs like NWA's "Fuck the Police," off their album Straight Outta Compton, told the world the truth of their own lives. And they told it on mainstream radio. When the Rodney King beating happened, one of the interview subjects in "Burn" said that she had almost a sensation of relief when she saw that horrible footage, because now at least there was evidence of what every African-American already knew. Surely now something would HAVE to be done about it! (Cue the acquittal of the cops who did the beating. It's devastating.)

"Burn" is a concise survey course, filled with names and information, suggesting further avenues of study. Except for the opening credits (newspaper headlines showered by blazing sparks), Jenkins hasn't deployed too many "tricks" with the footage. It's jarring, then, when he adds hashtags like "#alternativefacts" to accompany a press conference by Darryl Gates, or "#Preach!" underneath a protester yelling into a microphone. If such devices were used throughout, it would represent a running commentary on the footage, a stylistic choice, but when it's used only once or twice it feels half-finished, like a half-developed idea. The same with the one-time insertion of Gary Coleman spouting his signature line ("Whatchoo talkin' bout, Willis?") from "Different Strokes" after an egregiously racist comment from some cop. These choices come from another documentary with another style, not the straightforward tone of the majority of "Burn."

"Burn Motherfucker, Burn!" starts with video footage from a bystander (one of many) who witnessed the March 2015 murder of a homeless man by the LAPD. Someone shouts at the cops from off-screen, "Y'all got tasers! Why y'all shoot that man?" The pain and outrage of that off-screen question fuels "Burn." What Jenkins does, and does so powerfully, is show that there is no such thing as an isolated incident. 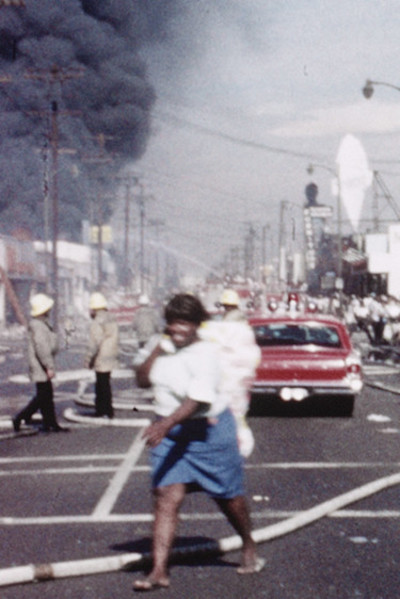 Danny Bakewell Sr. as Himself

Karen Bass as Herself

Charlie Beck as Himself - Chief of Police

Jeff Chang as Himself

Perry Farrell as Himself