'Why?" you may wonder as the end credits roll on director Alan White's "Broken."

In case you forgot, the answer is most likely summarized in two words: Heather Graham. Which is a shame, because she's not very good in it. Graham is reliably gorgeous. That much we know going in. We know it when we see her in a bikini on the beach. We know it when characters tell her how pretty she is, which they invariably do, anyway. That's one of the problems with "Broken": It tells you plenty about what you already know but doesn't show you anything worth knowing.

Among the things we already know from lots of other movies, besides how stunning Graham is, are cliches about beautiful losers with broken show-biz dreams, desperate wastrel junkies with track marks on their forearms, unshaven psycho ex-boyfriends with guns, and indie pictures with chronologically fractured narrative structures. "Broken" is one of those -- or, rather, all of them.

Graham plays Hope, an attractive Ohioan of optimistic temperament who, in the opening scene, sits herself down in front of her video camera, proclaims today the first day of the rest of her life, and expresses a hope to follow her guitar-strumming, singer-songwriting dream westward to the showbiz mecca of Los Angeles. Once there, she hopes not to fail, but to succeed. Because she is upbeat, hopeful, full of hope.

On the sandy shores of the Pacific, the irresistible force of Hope meets the implacable heart of Will (Jeremy Sisto), who is persistent in his efforts to flatter her, seduce her and shoot her up with heroin. He is willful, she is willing (in a hopeful kind of way), and after she breaks up with him, he will not accept that it's over. As Will explains his philosophy: Where there's a Will, there's a way. He says that.

"Broken" really takes place during one long dark night of the soul at the Blue Star Diner in outer Los Angeles, where an all-but-abandoned Hope, now a hardened food-service worker, toils on an endless shift. Creepy night-owl patrons drift into the joint, taunting her with reminders of her former naivete and offering ill portents of Hopes Yet to Come. What will she be -- a party girl or a call girl, a waitress or a songstress or a homeless? She must settle on her fate tonight. Meanwhile, everybody wants coffee.

It has only been a few months, but Hope has been down so long it looks like up to her. Still, she hasn't given up hope. What she has given up is Will who, driven by desire and accompanied by some great Brian Jonestown Massacre songs and a handgun, is slooooowly but inexorably making his way through the desert, the darkness, the flashbacks, the fantasy sequences, and the other tortuous Lynchian detours designed to evoke "Mulholland Drive," toward a climactic confrontation.

Here's an example of why "Broken" doesn't work: Two guys -- a producer and a director -- sit in a booth discussing a nebulous movie project. It's about a girl. The producer notices that Hope, the waitress, looks exactly the way he imagined the girl in the movie, whose crazy junkie boyfriend can't deal after she breaks up with him. Hope is uncannily intrigued. The producer mentions that the script isn't finished but some non-gratuitous nudity may be required because the girl has sex with her boyfriend's dealer in order to score some smack. We see the script on the table. It's called "Broken." Before you can say self-reflexive, Hope is having gratuitous sex with her boyfriend's dealer in order to score some smack! It's a flashback, or a memory, or a hallucination, but hey: It's trite. It's also insufficiently nude to have justified the previous scene.

"Broken," like Graham, is lovely to look at -- the former in an Edward Hopper-like way and the latter in a Sandro Botticelli-like way. But compare this movie to, say, "Boogie Nights," and you'll get an inkling of how a film performance owes at least as much to directorial, editorial and scripting skills as it does to acting chops.

Poor Graham is too often left standing around, bugging her eyes in desperation or looking bereft, as if she were holding an overwritten script in one hand and a highlighter in the other, just below the edge of the frame. 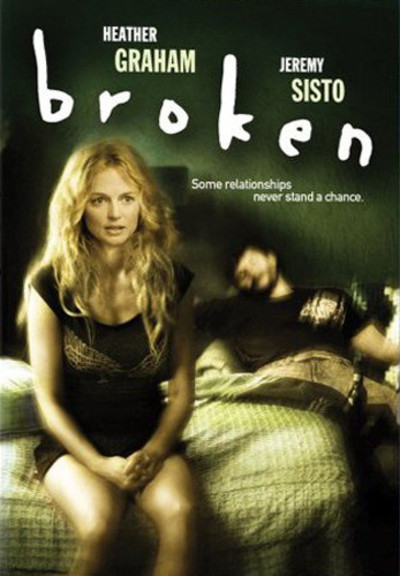 Jeremy Sisto as Will