Georgian filmmaker Levan Koguashvili’s Tribeca prize-winner, “Brighton 4th,” is a tragicomedy that sneaks up on you stealthily before flooring you with an emotional sucker punch in the final reel. At first, the film seems to be merely about sad sacks who compulsively gamble, losing the money they’ve been sent by family members in part because they can’t help giving in to mounting irritation. The amusing opening scene, in which a man (Temur Gvalia) attempts to pay an obnoxious fellow gambler so that he’ll leave, only to find himself forcibly removed from the room, is mirrored by a painful moment in the film’s midsection, when a younger man, Soso (Giorgi Tabidze), gambles away his remaining dollars in an act of desperation, all the while being tormented by the eating habits of the guy seated across from him. Both Gvalia and Tabidze’s addicts have a knack for digging deeper and deeper holes for themselves, and one imagines their lives would’ve fallen apart completely had they not had the good fortune of being related—as brother and son, respectively—to the man who emerges as the heart of the film, Kakhi.

He is played by former Olympic world champion wrestler Levan Tedaishvili in only his second screen credit, following his portrayal of a titular role in 1987’s “Khareba da Gogia.” His wonderful performance here recalls everything I loved about the late Richard Farnsworth, a veteran stuntman who began acting later in life and proved to have a grace and delicate nuance that was all his own. For his final role as Alvin Straight in David Lynch’s 1999 masterpiece, “The Straight Story,” Farnsworth embodied the stubbornness of a man determined to live his twilight years on his own terms, refusing to see doctors while going to enormous lengths to aid his family. The same could be said of Kakhi, whose journey from his home in Tbilisi to Soso’s current dwelling in Brooklyn’s Russian-speaking neighborhood of Brighton Beach accompanies the picture’s delayed title card, arriving around the 15-minute mark. Like Alvin, Kakhi has an intuitive sense about people that enables him to look beneath their objectionable actions to find the aching human within. This results in numerous scenes that begin in a threatening manner before evolving into something disarmingly tender.

Take, for example, the sequence where Kakhi is recruited by Georgian immigrants at Soso’s boarding house as a heavy to intimidate Farik (Tolepbergen Baisakalov), the Kazakh employer extorting money from the women he’s hired as motel cleaners. At first, Farik is enraged and defensive, but as soon as one of his victims starts having a seizure, the dynamic shifts completely, triggering a startling empathy within the thief. This serves as the prelude to one of the film’s best scenes, where Kakhi reaches a place of understanding in regards to Farik that allows him to see what no one else can. He ultimately treats him no differently than he does his son, who squandered all the money he was meant to put towards medical school, leaving him $14,000 in debt to a local mob boss, Amir (Yuri Zur). On top of that, Soso is in need of a green card, which he hopes to obtain through a “fake marriage” to Lena, played by the sublime Nadia Mikhalkova, who was unforgettably featured at a young age in her father’s 1994 Oscar-winner, “Burnt by the Sun.” It’s clear, however, that there is genuine love between the pair, as she tends to his wounds even after howling in fury at his self-inflicted distress.

In his director’s statement, Koguashvili notes that for immigrants from the former USSR, “America—the land of opportunity—begins in Brighton Beach and ends in Brighton Beach, because they can’t leave this place.” Cinematographer Phedon Papamichael (“Nebraska”) lenses the neighborhood in a way that often makes it indiscernible from Tbilisi, where ancient statues are viewed in the same frame as the golden arches of McDonald’s. A majority of the film’s ensemble is comprised of nonprofessional actors from Brighton Beach whose mere presence enriches the film immensely. Many of my favorite musical sequences over the past decade—particularly the breathtaking extended dance in Nana Ekvitimishvili and Simon Groß’s 2013 gem, “In Bloom”—are from Georgian cinema, and the moments in “Brighton 4th” where characters break into song, dissolving tensions with their shared cultural heritage, are no exception.

Aside from Tedaishvili, the film’s other great performance is delivered by Kakhi Kavsadze, the Georgian screen legend renowned for his work in 1970’s “White Sun of the Desert” and to whom the film is dedicated (he passed away last April at age 85, two months prior to the picture’s world premiere at Tribeca). He plays Sergo, the boarding house’s delightful opera-belting inhabitant who now works as a doorman but can’t resist incorporating songs into his day, whether or not they are requested. Kavsadze’s passing makes the film’s final, perfectly pitched moments all the more astonishing in their poignance, yet when viewed simply on the power of its narrative, “Brighton 4th” has a cumulative impact that is unmistakable.

Kakhi is so determined to carry the weight of his loved one’s problems on his shoulders that he can’t even bear telling the truth of Soso’s predicament to his wife (Laura Rekhviashvili), though she knows him well enough to see through every well-meaning deception. Tedaishvili never has to raise his voice in order to keep our attention arrested, and it is his quiet confidence, above all, that earns the film’s biggest laughs. “Brighton 4th” could’ve easily approached its story with deadly seriousness, and there are many aspects to it that are terribly despairing. Yet Koguashvili finds such endearing warmth in the kind acts of his characters that we’re left smiling through our tears, grateful for those whose sacrifices have made our lives possible. It is also a testament to what special qualities performers whose background is not predominantly in acting can bring to their roles. Just because Tedaishvili and Farnsworth have a genuine sweetness about them doesn’t mean they are in any way soft. The inherent strength in their screen personas cannot be faked, and when it is put on full display, there is no one we’d rather have in our corner. 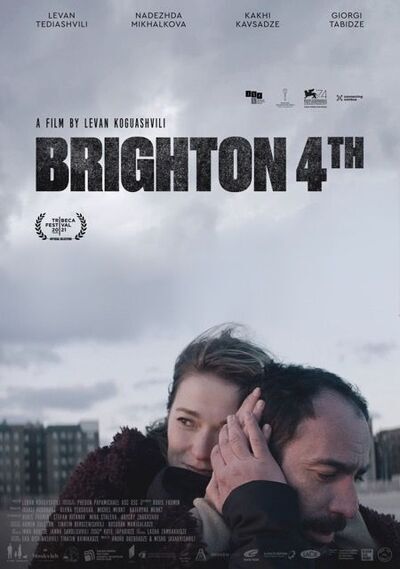