"Breaking the Girls" is a film noir that attributes its characters' various crimes to heartbreak, loneliness, hardship and childhood trauma. As its narrative puzzle pieces snap into place, characters of ambiguous morality and sexuality seem to come into focus, only to reveal another layer of deception or confusion.

These twists aren't very interesting or believable, but what kept me watching was the core psychology that director Jamie Babbitt and her actors fight to explore while weighed down by ornamental genre conventions. Underneath it all, we have a few lost, lonely and bitter young women trying to make lives for themselves. Babbitt seems more inspired dealing with the stuff underneath than with the genre mechanics. It takes the sturdiest plot points from "Strangers on a Train" and "Heathers" (minus the latter film's dark comedy) and blends smoothly. Too smoothly, I reckon. Alex (Madelin Zima), the seductress/lost child at the heart of this film, is simply too well-drawn and fascinating for the lockstep cable- movie plot.

Babbit and one of her screenwriters, Guinevere Turner, are old pros in cable TV programming and in groundbreaking works of indie and queer cinema. Turner co-wrote the cult classics "Go Fish" (in which she co-starred) and "American Psycho"; Babbitt is most famous for her sweet coming-out comedy "But I'm a Cheerleader." Both have worked on the lesbian drama "The L Word," of which "Breaking the Girls" sometimes seems a noirish episode. Together, they are masterful at depicting meet cutes, girl crushes, sweet , offbeat romance and the anguish of relationships.

The first act of "Breaking the Girls" shows off these talents with seemingly effortless grace and style. Alex, a spoiled but lonely rich girl draws Sara (Agnes Bruckner), a struggling law student, into her spontaneous, seemingly carefree world of sexual hookups, shoplifting, pool wading and sunset watching. They share some painful bits of their life stories and grow close with a speed to make the heart skip a beat. Kinky titillation and compassion are at odds in so many movies; Babbitt has a gift for making them sing in harmony.

"Breaking the Girls" has a lot more on its mind, of course, and the ensuing procession of twists and reversals dissipate the tension along with our investment. That might also be part of the design, because I sense an ambition to tell a story much larger than "rich girl and poor girl swap murders." To go any further would be to spoil some things, so I'll just say that the destination this film arrives upon reminded me of Kenji Mizoguchi's "fallen women" films. In Mizoguchi films like "Sisters of the Gion", crimes, indignities and injustices proliferate because of social customs that punish free-spirited women. In this climate, such women seek their freedom by any means necessary. Here, the punishment is doled out more evenly, and in the end we learn that everybody has her reasons, nobody gets precisely what she wants, and nobody's hands are clean.

Solid actors do their best to keep the film alive and intriguing. The standouts are Zima, who seems more fragile the more she rages and more menacing the softer her voice becomes, and Davenia McFadden as a homicide detective you do not want to mess with, no sir. Granite character actor Dennis Farina just passed away, and here is Ms. McFadden, with her wide-set damning eyes, to claim some of Farina's badass turf.

The half-ingenious, half-ludicrous third act makes observations about class and legacy worth thinking about. It calls to mind Jeff Nichols's "Shotgun Stories." Just don't expect the kind of brooding, simmering beauty that Nichols brought to his tale of half-brothers warring over the grave of their thoughtless father, and never mind the generically ominous synth-and-piano score. "Breaking the Girls" wraps up as if to make room for the next batch of commercials before the 10pm slot. Babbitt loves her actors and gives them fun stuff to do. If she works with similar themes in the future, I hope she gives her performers and her clearly fertile imagination more room to play. 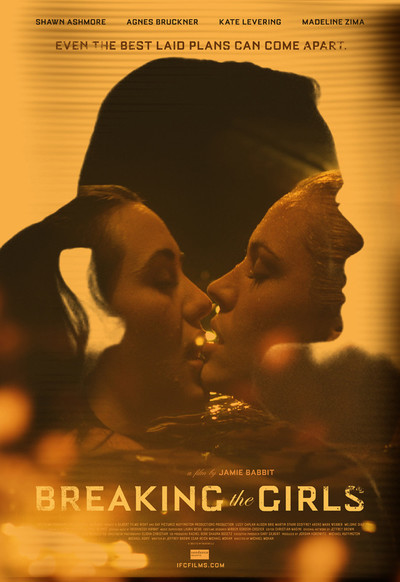