Are you consumed by an overwhelming desire to fork over the price of a movie ticket in order to see the kind of meagerly funded nonsense that the SyFy network provides for the price of a basic cable package? If the answer is yes, then "Bounty Killer" is right up your alley.

In the not-too-distant future, according to some helpful expository narration, corporations will take over the world's governments. Their continued lust for power and profits will reduce nearly the entire plant into a smoking ruin while those in charge take off with the remaining wealth for parts unknown. A secret Council of Nine declares white-collar crimes to be punishable by death, and creates a group of so-called "bounty killers" to track corporate weasels down and make them pay for their crimes in the messiest manner possible. As a result, the bounty killers become celebrities with the two key players being he laconic Drifter (Matthew Marsden) the very first bounty killer, and the sexy Mary Death (Christian Pitre), who has gone from being Drifter's protege and lover to being the most popular killer of them all.

As the story open, it turns out that Drifter has a more complicated past than previously assumed and as a result, he now has a bounty out on his head. Along with his trusted gun caddy (Barak Hardley), he decides to set off on a treacherous journey across the bombed-out remains of a post-apocalyptic world on a suicide mission to reach the Council of Nine and plead his case. Along the way, he is pursued by Mary, naturally, along with a corporate-owned hit squad known as Yellow Ties (all looking like refugees from the Serious Moonlight tour) and the possibly cannibalistic Gypsies, who seem to have a particular interest in learning what he knows about Mary. (Plot point.) Eventually, Drifter's past catches up with him in the form of former flame Catherine (Kristanna Loken). Heads really do roll, and ledgers are covered with more than red ink.

Although directed by relative unknown Henry Saine and based upon an obscure graphic novel, some trash-film fanatics may be forgiven for thinking that "Bounty Killer" is the work of the infamous Uwe Boll, often regarded as the worst filmmaker of our time and possibly of the history of the cinema entire. Like many of Boll's demented offerings (especially "Postal" and "Assault on Wall Street"), the film mixes together chintzy CGI effects, gallons of ersatz gore, dialogue that is almost literally unspeakable, incoherent editing and a political sensibility that could politely be described as confused. And like Boll's films, it even offers up brief and inexplicable appearances by familiar faces. Rapper Eve is a Gypsy warrior. Beverly D'Angelo plays a frontier madam. Gary Busey turns up for a couple of scenes in such a random manner that he appears to have drifted in from another movie, no doubt to the immense relief of the other movie.

The film wants to work both as a post-apocalyptic saga in the grand tradition of the "Mad Max" films and as a tongue-in-cheek goof on such things, and never quite succeeds as either. As a spoof, it doesn't work because it is more concerned with winking at viewers than of giving them funny something to wink about. As satire, it fails because it brings up its reasonably provocative ideas early on, then nearly forgets about them until the last ten minutes or so. In either case, the attempts to mix humor with extreme gore fail miserably. There is, I suppose, a way to laugh at the sight of someone with a chain embedded in their skull, but this film never quite finds it. As a straightforward genre piece, it also misses the mark because it runs on a little too long for its own good, the leads are not very interesting and, with the exception of two fairly impressive sequences (a desert chase and the opening stanza of the final set-piece), the action scenes are equally forgettable.

And yet, even though there is no way that I can recommend "Bounty Killer" in good conscience to anyone, I must admit to feeling a certain amount of odd affection towards it in hindsight. It may be nothing more than a trashy B movie, but dumb as it is, I would take its cheapo charms over the lugubrious likes of most of the would-be blockbusters that I withered through this summer. It has been made with enough energy and enthusiasm to suggest that the people responsible for it may one day make something worth watching. Besides, I suppose it is impossible to completely hate any film featuring the deathless line, "I tried to love her, but she stabbed me in the spleen and left me for dead." 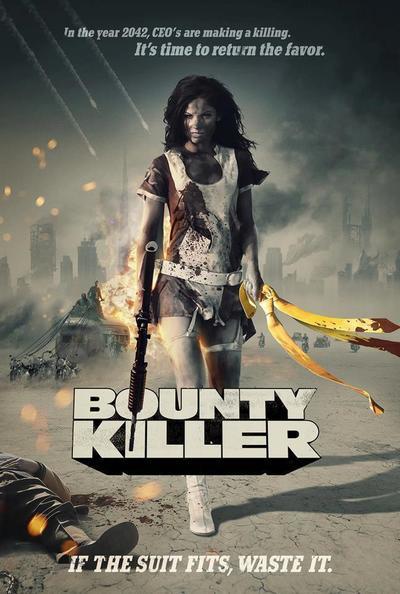