It feels sort of mean trashing “Book of Love,” a bilingual romantic comedy that offers a clever premise but never truly delivers on it in satisfying fashion.

The film is clearly sweet and well-intentioned, but Mexican director and co-writer Analeine Cal y Mayor has trouble transcending the confines of her meager budget, which leaves “Book of Love” looking and sounding distractingly chintzy. It might have been possible to overlook such technical weaknesses if the script from Cal y Mayor and David Quantick were stronger. Stock characters receive superficial characteristics: the uptight Brit, the feisty single mom, the flaky ex-husband, the flamboyantly gay book publisher. And it certainly doesn’t help that her two stars, Sam Claflin and Verónica Echegui, haven’t got the slightest bit of chemistry with each other, despite their individual appeal.

There’s some promise at the beginning, though. Claflin plays Henry Copper, a London novelist whose latest work, “The Sensible Heart,” is such a dud that he draws only three people to his in-store book reading—one of whom is his publicist. It’s a romance novel without the romance; patience is more important than passion. Not exactly a breezy beach read. But then his rude and demanding publicist (Lucy Punch) informs him that, surprisingly, “The Sensible Heart” is a huge hit in Mexico. And once he arrives there to bask in the adulation and drum up sales, he finds out why: The translator, Maria Rodriguez (Echegui), rewrote the whole thing in Spanish, turning it into a hot-and-heavy bodice ripper. An aspiring writer herself, she viewed it as an opportunity to practice her craft and lift herself from the doldrums of waiting tables at a neighborhood bar to support her young son.

But in the process, Maria turns Henry into an unlikely sex symbol. Claflin is very much in 1990s Hugh Grant mode here, fumbling and bumbling his way through every scenario. Henry’s halting delivery and paltry knowledge of Spanish offer some easy, fish-out-of-water laughs. This is actually an amusing idea that could have been dragged out longer: Henry’s confusion over the response to his book, and the disparity between what’s actually in it and the way women everywhere throw themselves at him. This is a guy who wears a corduroy blazer wherever he goes, regardless of the weather, and women are tossing their panties at him on stage. Cal y Mayor clues Henry in far too early, leaving him and Maria to bicker as they travel from town to town in her beat-up Volkswagen Beetle for the rest of the film.

Ah, but they also have to fall in love with each other, of course, which becomes increasingly difficult to believe the more time they spend together. There’s just no connection, even when they’re forced to work together on a second book because their first “collaboration” was such a success. Right when the pacing should be getting zanier, it drags. Their getting-to-know-you conversations are inane, and the awkward way these scenes are blocked and shot does them no favors. One sequence at a supposedly popular TV talk show looks like something out of cable access programming, the set is so flimsy and the lighting is so unflattering.

But Echegui has a lot of spark, which manages to shine through despite the story’s shortcomings. She’s got a likable screen presence and displays some sharp comic timing here and there. And she has some nice moments with Ruy Gaytan as her young son, Diego, whom she must schlep on the book tour, along with her grandfather, for all sorts of contrived reasons.

Diego is the key to one of the strongest and gentlest scenes in the film, when Henry tries to console the boy using mangled Spanish with the help of a pocket dictionary. There’s some hope in the decency on display there, as well as a wee bit of character development. But then frustratingly, “Book of Love” resorts to rom-com cliches for its big finale: a very public proclamation of love on stage in front of a packed audience, as well as a wacky brawl involving Maria’s jealous ex. You’ve read this book before—countless times. 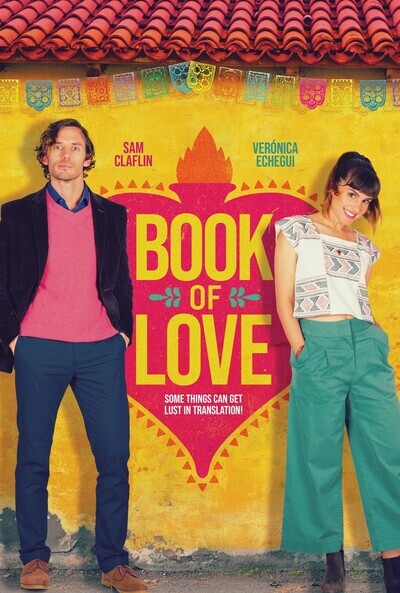