"Body Brokers" tells the kind of story that should leave you quaking with anger afterwards. Instead, viewers will come away with more annoyance at the movie than outrage over what it is trying to say. To make the frustration even worse, the film from writer/director John Swab has just enough going for it to keep you watching, with increasingly vain hope that it might finally start to click.

Utah (Jack Kilmer) and Opal (Alice Englert) are two young junkies living on the streets of a small Ohio town, robbing convenience stores and hooking in order to fund their habits. One day, while hanging out, they meet Wood (Michael Kenneth Williams), a guy who recognizes their lifestyle all too well, buys them lunch, and offers to help them get into a treatment program so that they can clean up their lives as he himself did several years earlier. Opal immediately spurns the offer but Utah, who has been having second thoughts about the life he has been living, agrees to give it a shot. Wood flies him out to Los Angeles and gets him into a rehab center. With the help of a counsellor (Melissa Leo) and the support of aide May (Jessica Rothe), he begins the slow road to recovery.

Inspiring enough, I suppose, but during this tale of recovery the film’s real story slowly takes shape. At certain points, a narrator (Frank Grillo) cuts in to inform viewers that the rehab industry, as the result of ACA provisions, has boomed in recent years—pulling in more than $12 million dollars a year in the Southern California area alone. A new breed of scam artist has arrived on the scene to grab as much of that money as possible by getting patients into the beds at rehab clinics by any means necessary where their insurance can be billed for outrageous costs ($2,000 for a simple urine test) that they, and sometimes the patients themselves, will receive kickbacks on. Wood is one of these so-called “body brokers” and brings the recovered Utah into the game. After some initial trepidation, Utah quickly falls in and is soon cheerfully driving van loads of addicts over to an unscrupulous doctor (Peter Greene) to receive implants of a medically dubious but highly billable nature. Utah then begins to have second thoughts about what he is doing but by that time, it may be too late for him to get out clean, so to speak.

This is the kind of muckraking thriller that Steven Soderbergh could do in his sleep by peeling back the curtains while at the same time maintaining the human drama. But while the premise here is interesting enough, our hero is decidedly less so. And once the story becomes less interested in unveiling systemic institutional abuse, and it simply focuses more on his journey to the dark side and back. We've seen all of this many times before. The film’s ending is an even bigger problem, as it tries to land on a darkly realistic note but which proves to be too abrupt and unsatisfying for its own good.

And yet while “Body Brokers” never quite comes together, it does have enough things going for it. Michael Kenneth Williams is quite good as Utah’s guide to the seamy side of the recovery business, one that encompasses everything from essentially selling patients to the highest-bidding rehab center to digging holes for those who get out of line along the way. Frank Grillo is also entertaining as he delivers his sardonic narration and turns up on camera as well in a role that I will leave for you to discover. And although neither one gets much to do, Jessica Rothe and Melissa Leo both do strong work as those who represent the non-exploitative side of the rehabilitation world. The film's most memorable performance comes from veteran character actor Peter Greene—he is sensational in a brief turn as a cadaverous-looking doctor who is in on one of the scams until he makes the mistake of getting greedy.

There are a number of strong individual scenes in "Body Brokers" (the one in which Utah is led to a 12-step-meeting—the kind of recovery treatment the film wholeheartedly endorses—is especially good.) The trouble is that the narrative just isn’t interesting enough to live up to the premise and it gets weaker the more it descends further into conventional melodrama. (A scene where Utah revisits the convenience store he helped rob in the opening scene is such a groaner that you want to delete it right there and then.) “Body Brokers” was clearly made with good intentions, but while it might still fill you with anger towards the predatory aspects of the rehabilitation industry, you'll also be upset that the script is not nearly as great as it could have been. 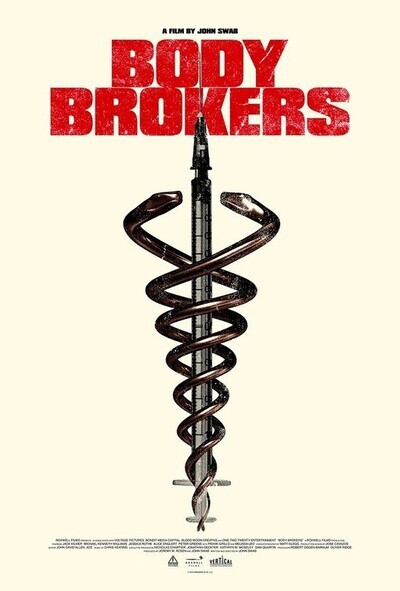 Jessica Rothe as May