When a film doesn't work, it's often because the intention behind it is not clear. What does the film want to convey? What is the point? What's the story? These are elemental but essential considerations. "Bobbi Jene," Elvira Lind's documentary about Bobbi Jene Smith, a longtime dancer in Israeli choreographer Ohad Naharin's Batsheva Dance Group, is unclear in its intentions. It doesn't know what it wants to be, or what story it wants to tell. The film is about a dancer, but there's not all that much dance in it. It's about a woman making a life-changing choice, but the movie itself has a very low-stakes atmosphere. Bobbi Jene Smith has had a unique life as a dancer, but her personal problems are extremely ordinary. Lind gets sucked into these personal matters to such a degree that they take over the film. "Bobbi Jene," then, is really a film about Smith's love life, the challenges of maintaining a long-distance relationship, dealing with parents who don't "get it," fears that she might never have kids, that it's "too late" for her ... While these things are meaningful to those going through them, it is not especially interesting to watch, especially when Lind's intention is to profile a dancer whose work she clearly finds provocative.

Bobbi Jene Smith was attending Juilliard when Naharin's Batsheva Dance Group visited New York. After seeing one of the performances, she was so blown away she sought out Naharin to compliment him on his work. He invited her to join the company. Impulsively, she dropped out of school and moved to Israel to take him up on his offer. She was 21 years old. When "Bobbi Jene" opens, Smith, now 31, has decided to leave Batsheva and strike out on her own. She wants to see who she is as a dancer outside Naharin's intense circle of influence (they were also lovers at one point). She has lived in Israel for a decade, and makes the difficult decision to move back to the United States. She is in a relationship with Or, another dancer in Batsheva, but he is 10 years her junior, and doesn't want to leave the dance company yet. He tells her he wants to raise his future kids in Israel. They have a tearful goodbye (one of many) at the airport.

Back in the States, she works on a solo show. Lind doesn't dig deep enough into Smith's process—as a dancer, or as a choreographer—to give us an idea of what the solo show is about, what the movements are meant to express. What's Smith's philosophy as a dancer? What's her style? The few comments Smith makes are banal ("I want to get to that place where I have no strength to hide anything."). The footage we get of Smith's solo show, done completely in the nude, culminating in her grinding herself into a bag of sand, don't help. Lind doesn't show the dance in its totality, cutting away from the action to focus on the faces of audience members as we hear Smith grunting and moaning off-screen.

She was barely out of her teenage years when she hitched her star to Naharin. Naharin's style and dance philosophy ("gaga") is known the world over, and Bobbi Jene flourished in that environment. What kind of work does she want to create on her own? More importantly though, does she have anything to say? These are fascinating concepts. (The recent "Polina," while not a documentary, is about just that.) Smith's solo show, done at the Israeli Museum in Jerusalem, comes off as extremely literal, with its only goal personal catharsis, or maybe just exhibitionism. The tearful impressed responses of audience members afterwards left me thinking, "I guess you had to be there." There had been some concern beforehand that her show would be controversial in the more conservative environment of Jerusalem. Instead, we are just shown the raves, the accolades. If there was any pushback, it's not included. Lind has instead spent most of her time on Bobbi Jene and Or's Skype-conversations, their bittersweet reunions, their struggles to maintain their relationship at such a far remove, Bobbi Jene crying about losing him, Bobbi Jene morosely folding her nephew's baby clothes, or staring longingly at diamond rings in a store window ... it's endless. We all have these problems. Who cares?

Earlier this year, Tomer Heymann's documentary "Mr. Gaga," profiled Ohad Naharin and his work with Batsheva. Naharin is intimidating, handsome and intense, and he makes a compelling central figure. But "Mr. Gaga" was also a riveting dance film, its camera work and visual style carefully designed to capture Naharin's choreography in such a visceral way that watching the film was the next best thing to being there in the theatre. "Bobbi Jene" suffers by comparison, although the problem goes deeper than that. Lind has not found a way to show us what she finds so interesting in Smith. 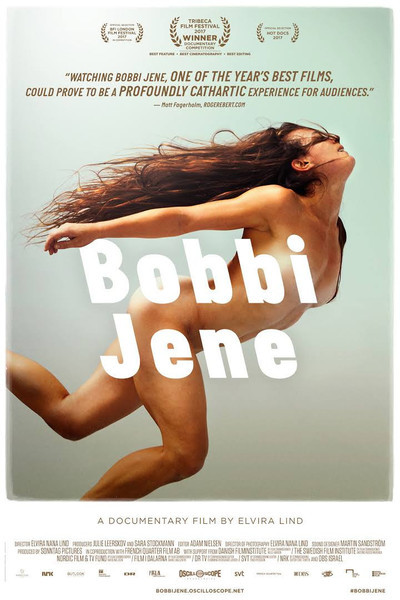