Anyone who’s worked a soul-draining cubicle desk job has questioned whether or not everyone in the office is truly human. Corporate drones who look like zombies or bosses who seem as heartless as vampires—it’s a ripe setting for a horror-comedy in the vein of “Shaun of the Dead” or its numerous imitators. Call this one “Bram Stoker’s The Office,” or “George A. Romero’s Office Space.” “Bloodsucking Bastards” doesn’t quite hit all of the marks it needed to in order to wholeheartedly recommend, but it is often surprisingly clever and funnier than most horror-comedies of the last two decades. After people like Peter Jackson and Edgar Wright helped define the genre, too many filmmakers thought it was easy to make films like “Dead-Alive” and “Shaun,” resulting in waves of garbage. I’m pleased to report that “Bloodsucking Bastards” often enough rises above those bloody waves.

Evan (Fran Kranz) is having a bad day. His girlfriend Amanda (Emma Fitzpatrick) said “I love you” last night and Evan, in a moment of panic, just responded “Nooooooooo.” As Amanda shoots him icy stares, Evan’s boss Ted (Joel Murray) passes him over for a promotion to Sales Manager, a job the hard worker assumed would be his someday. Instead, fearing that their little company would go under, Ted brought in a corporate shark, the slimy Max (Pedro Pascal), who happens to be an old rival of Evan’s. Meanwhile, the “workers” of this telemarketing outpost in the corporate desert seem to do little more all day than play video games, search for internet porn and avoid actual responsibility at all costs. Their slacker leader is wiseguy Tim (Joey Kern), while the shy Zabeth (Yvette Yates) just hopes her crush Evan will give her some attention now that his relationship has collapsed.

Shortly after Max’s arrival, things start getting weird. A new hire goes missing after taking the garbage out; a few more workers go to the basement and come back, well, different. The shy Zabeth returns a sexually aggressive young woman while other employees come back looking drained of life. Anyone who’s seen a horror movie knows there’s something malevolent on the edges of “Bloodsucking Bastards,” and it’s probably a safe bet that the new guy knows a thing or two about it. Before you know it, Evan and Tim are fighting for their lives against the undead.

Director Brian James O’Connell doesn’t overplay his setting, never quite falling back on the “soul-sucking job” aspects of his set-up in a way that could have easily become winkingly annoying. “Bloodsucking Bastards” works as well as it does by delicately balancing the two halves of its hybrid horror-comedy genre. In fact, it gets funnier as the chaos increases, offering up nice little witty asides such as when Evan grabs a mug to throw at an enemy and is surprised it says Harvard on it because no one who went to Harvard should work at their company. And the low-budget production does a solid job of implying more than showing when it comes to action and gore. We see characters splattered in blood more than actual action.

About that budget, I’m forgiving of DIY productions that work without much of a bottom line, but there are some basic film techniques that still need to be considered, and don’t cost a dime. There’s no reason for “Bloodsucking Bastards” to be as visually flat as it is, especially in the first act. Heads are cut off, and angles don’t seem to have been considered. It’s a byproduct of camerawork that seems designed merely to capture what’s being said than to have an artistic intent of its own. Turn up the lights a bit, frame the shot better, offer up some style, and “Bloodsucking Bastards” would have been a much better film. I also wish “Bastards” had really gone off the deep end in the final act. As is, it verges on the lunacy of a film like “Dead-Alive,” and other obvious inspirations, but never quite pushes the pedal to the floor.

Instead of the great film it could have been, it’s just one that horror fans will like and comedy fans seem likely to stumble upon on cable in the near future and be surprised they’ve never heard of it. Kranz is a charming lead, proving he should get more parts like this one, and O’Connell deserves a promotion to a bigger budget next time. 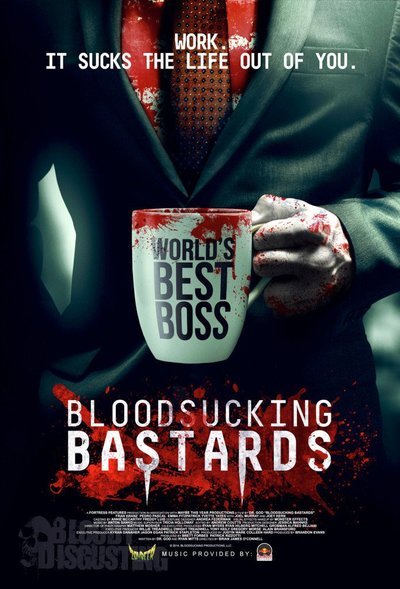 Parvesh Cheena as Jack the Intern