The French actor and director Guillaume Canet made his international arthouse name with the tricksy 2006 thriller "Tell No One," which he followed with the less tricksy and more indulgent where-am-I-and-my-generation-now drama "Little White Lies." This left the question of where he would go with his debut English-language feature an open one. Whether it was a tantalizingly open one would depend on how crazy you were about the prior films. This critic was only mildly impressed. But I am slightly surprised that with "Blood Ties," Canet accomplishes something like a full-on homage to his American filmmaking contemporary James Gray. This achievement is either made more strange or entirely explained by the fact that Gray himself co-wrote the script with Canet.

The cop-and-criminal brother relationship at the heart of "Blood Ties" hearkens back to Gray's 2007 "We Own The Night," not to mention maybe every other Gray film, and quite a few classic American noirs as well. Oddly enough, though—and this is where things get kind of confusing—"Blood Ties" is an English-language, American-set remake of a 2008 French film of the same name (in French) in which Canet co-starred. All of this exposition about the film's origins is not quite as material as the fact that this movie, with its outer-borough setting and outbreaks of brutality and scenes of tortured family life presided over by a dying patriarch who's only now coming to terms with his own issues, is very much the stuff of Gray's world.

Canet's approach, though, is rather more narratively diffuse than what an American moviemaker would likely come up with. Setting his story in 1974 Queens, Canet opens with a police raid accompanied by Ace Frehley's "New York Groove," a well-done set piece given extra juice by Billy Crudup's tense, determined portrayal of the cop heading the bust. Crudup's character, Frank, is soon seen tersely greeting his older brother Chris (Clive Owen) on the latter's release from prison. Their dutiful sister (Lili Taylor) tries to smooth out the understandable tensions between the brothers; their dad (James Caan), meanwhile, is struggling after losing a lung to cancer surgery. The cheeriness quotient is upped at a visit to Chris's ex-wife (Marion Cotillard), a former hooker with drug issues who's also the mother of Chris's children. As Chris shacks up at Frank's place, the brothers negotiate the necessarily challenging vicissitudes of their relationship. And both cop and criminal have loyalties and interests that take them to dangerous places: Frank wants to win back an old girlfriend (Zoe Saldana) who's taken up with a small-time crook, while Chris shows little resistance to the currents trying to pull him back into a life of crime, even as he romances a relatively "good" young woman (Mila Kunis).

Tracking the family over the course of a year, "Blood Ties" aspires to a novelistic scope and level of detail, and most of the cast do a great job inhabiting their characters (Kunis has a bit of trouble on the accent front; so does Owen, although the latter compensates by adding some guttural thickness to his vocal timbre, and also not having a whole lot of dialogue). But while Canet's direction can't be said to be all over the place, the movie never settles into the groove it so dearly aspires to. The twists and turns of the plot are plentiful, and eventually my "okay, I'll roll with this" attitude, when presented with yet another implausibility, gave way to "you've got to be kidding me." Also, the movie's song-based soundtrack is often way, way too on the nose; you'll never guess what happens in the scene that uses The Velvet Underground's "Heroin," for instance. Also, is there some kind of law that says Noah Emmerich has to play a ticked-off cop in EVERY New-York-set movie about policemen and their discontents? And so on. And honestly, I've had similar misgivings, although not so pronounced, about ACTUAL James Gray films. But the virtues I've cited are real enough, too, and if you're an ardent admirer of pretty much anyone in the cast (OK, except Emmerich), you'll find something worthwhile here. 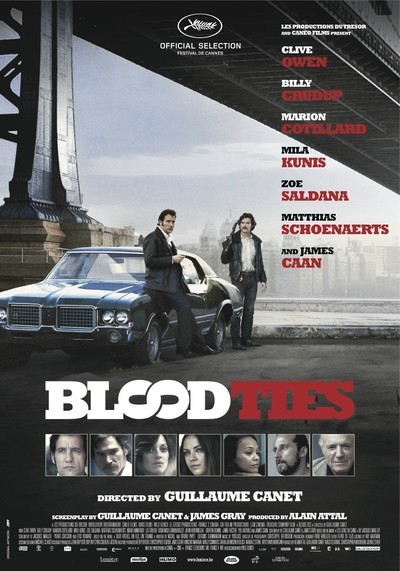