What comes to mind when you hear the title "Blood Glacier?" Apart from a giant plasma-encrusted iceberg, that is. I'm sure your mind is racing. I know mine was! I had to know: what's in a blood glacier? Is this a SyFy Channel Film? A rose by any other name? Do I smell gas? In no short order, "Blood Glacier" answers: rapidly-mutating monster bacteria; no, it's an Austrian indie horror film; it'd smell as sweet; and yes, get help.

"Blood Glacier" wants viewers to be both sad and angry at the thought that global warming is going to melt the Anctarctic ice caps, and unleash a hail of man-eating mutants. Yes, the End Times are nigh, and they are coming in the form of giant hybrid monsters, like a woodlouse-fox-thing. But don't get your hopes up: "Blood Glacier" is too sleepy to do anything with its guano-stirring premise. Yes, there are crazy-go-nutty monsters in the film, but you seldom get to see them as they sadly are not the focus of "Blood Glacier." Instead, the film gets lost in a vague, gruel-thin atmosphere of loss, and impending doom. It is not really about global warming, which is actually a thing, and deserves a good horror film. But the movie's not focused enough to be a good creature feature, and it's not involving enough to be viscerally upsetting. So while it should be fun and creepy, "Blood Glacier" is just kinda there.

The film starts with a needlessly blocky text scroll. This introductory intertitle is only seven sentences long, but imagine those sentences as read by a crazy old man that's angry, but sleepy, though angry, still sleepy: "In 2014, the last [global-warming] skeptics fall silent," blah blah blah, "Alpine glaciers will disappear," and so on, and "Life on Earth will change forever." Then a beat, then "We will change." Sorry, guys, but you can't light a fire under my seat with a fire extinguisher.

After this rousing opening, we meet the film's principle cast: a generic group of scientists working in the Austrian Alps, and Janek (Gerhard Liebmann), their scruffy guide. Janek's the only relatable character, mostly because he's the only one with a backstory. Janek has stayed in his mountain outpost for four years, three years longer than his job required him to. Being an especially sad Tom Waits character, Janek's in emotional turmoil, hung up on a glaciologist named Tanja (Edita Malovcic), though they parted ways under mysterious circumstances. But Tanja's back now. She leads an inspection of Janek's outpost that goes generically amiss after Janek's dog Tinni stumbles upon the titular land-mass. That monster and a couple others attack Janek and his nerdy friends, though they don't really attack with great urgency, or numbers.

In that sense, "Blood Glacier" is only kind of like John Carpenter's "The Thing." Like that earlier film, "Blood Glacier" capitalizes on its forbidding, desolate setting, and turns scientists into men of action. But while the creature attack scenes are kind of fun, they're few and far between, and poorly covered. It doesn't really matter that you can't see the monsters very clearly, not often, anyway. What matters is that "Blood Glacier" is a movie where mood takes precedence over plot, and the filmmakers just aren't decisive enough to pull that off. The film mostly drags, and doesn't do much with its gonzo premise, preferring instead to indecisively push Janek and Tanja's plot along, then show you the other scientists talking amongst themselves, then some nature shots, then oh noes, monster ibex. I don't mind that "Blood Glacier" is slow, and I don't care that it's silly. I mind that it's not thoughtful or involving enough to turn my mind off, and make me care about its goofy, dismal premise.

The one time "Blood Glacier" nails what it's trying to achieve is the scene where Janek has to decide what to do with his ailing dog. These scenes are very hard to watch: watching a beloved pet in pain is heart-breaking, especially when you know you can only relieve your friend by putting them down. The scene where Tanja helps Janek put Tinni down is sad, and quietly terrifying, and therefore the best thing in the film. But beyond this scene, nothing about "Blood Glacier" is that memorable, not even the practical-effects-driven ibex I mentioned earlier (it's not that cool, trust me). The film just sits there, making you feel stupid for expecting anything from it. 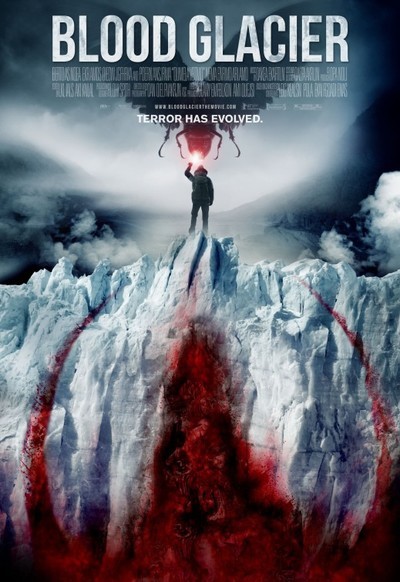