It’s funny to see how much horror has taken off in this VOD-only period, perhaps comforting viewers in the sense that it could always be worse. In a long history of cautionary vacation films that I like to call “don’t leave your couch movies” comes Australia’s “Black Water: Abyss,” a sequel to a little-seen but cult hit 2007 film called “Black Water.” The set-up and execution are almost charmingly simple—send five people into a cave system with rising waters and a killer croc and see what happens next. My general affinity for monster movies carried me through most of this B-movie, but the execution leaves something to be desired, particularly in its murky underwater cinematography and filmmaking tricks that turn the killer croc into something out of a slasher movie. “Black Water: Abyss” is one of those movies that isn’t particularly good but may not have to be if you’re in the right mood.

Two couples carry a lot of non-physical baggage on an Australian spelunking trip. Eric (Luke Mitchell) and Jennifer (Jessica McNamee) are introduced with her checking his phone for signs of trouble in the relationship, so you know they’re not stable enough to be thrust into a life-or-death situation. On the other hand, Viktor (Benjamin Hoetjes) knows a thing or two about death, having just come out of successful cancer treatment. While he’d rather be resting, his girlfriend Yolanda (Amali Golden), who just discovered she’s pregnant, encourages him to go on a spelunking trip. A cheating boyfriend, a pregnant girlfriend, a recovering cancer patient—one has to give director Andrew Traucki credit for at least trying to give his inevitable croc food some distinguishing characteristics.

The couples are joined by their buddy Cash (Anthony J. Sharpe), who tells them about a cave system he discovered while looking for missing tourists. Yes, one might think that the missing tourists would serve as a caution sign, but then there’s no movie. Not only do Cash & Co. ignore the fact of missing people, but they’re a bit blasé about the incoming tropical storm too. Cash takes the couples into the cave system and through some tunnels into a gorgeous underground world, and then the storm hits, leading to rising waters and no way out. Finally, of course, they learn they’re not alone. If the water won’t drown them, a giant crocodile is going to eat them.

There’s an effective, admirable simplicity to a lot of “Black Water: Abyss.” When it’s not digging into thin relationship drama, it maintains a confident, claustrophobic nihilism. Sure, there are suggestions about how they could escape, and signs of hope, but it feels like a film in which viewers should merely be placing bets not on if these characters are going to die but how. Sadly, a final narrative twist is so ridiculous that it makes one wish either the whole thing was as goofy as this “Anaconda”-esque moment, or the film found a way to end in a more realistic fashion. Pick a Killer Croc lane.

If anything, “Black Water: Abyss” could have benefited by being even tighter in terms of bells and whistles. The soap opera final twist isn’t necessary, and Traucki over-uses Michael Lira’s score, which sounds like it’s replicating “Jaws” during attacks. There’s a better version of “Black Water: Abyss” that doesn’t take itself quite as seriously, but when Traucki’s film is focused and no-nonsense, it’s just effective enough that fans of this kind of B-movie cinema won’t really care. 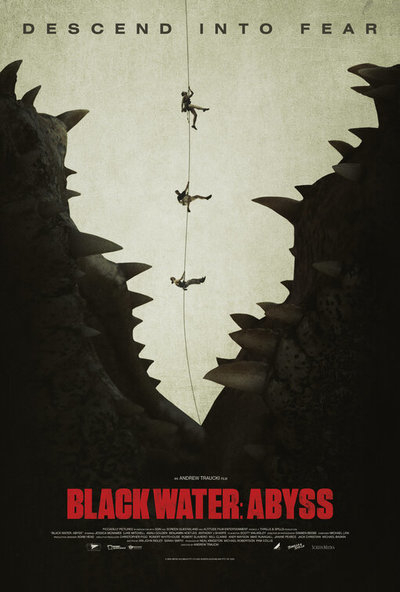