In my younger days, when my New Jersey palate was being trained in more refined things by some slightly older friends, I was introduced to Crab with Black Bean Sauce, a specialty at Lin’s China Garden on Bayard Street in Manhattan’s Chinatown. I will refrain from describing it in detail; suffice to say it was one of the messiest and most delectable meals I’ve ever enjoyed. And I was able to enjoy it multiple times at Lin’s before the joint closed. I’ve never been able to find its equivalent. The title “Black Crab” makes me think of the meal, and it’s annoying. The remembrance makes me hungry for it.

In this bleak, tense sci-fi war movie from Sweden, “Black Crab” refers to the name of a team recruited for a potentially victory-snagging probable suicide mission in a not-to-distant-future war to end all wars, or all of civilization itself. I know, just the sort of thing we’re all eager to experience right about now. (Not to belabor the point, but I’d rather be in Lin’s China Garden eating crab with black bean sauce, to be honest.) The movie, directed by Adam Berg, adapting a well-received sci-fi novel by Jerker Virdborg, opens with a corker of a scene, in which Noomi Rapace, as Caroline Edh, sits in a car with her daughter, waiting in a tunnel traffic jam. The David Bowie end-of-the-world song “Five Years” comes on the radio, right on the nose you might say, and suddenly the tunnel is filled with gunfire and soldiers and we black out on Edh and her young girl hiding in the backseat.

Cut to a few years later and Edh, as she’s referred to through most of the movie, is a soldier traveling to receive orders. Her transport is hardly first class. A train cattle car more or less. Upon disembarking, she’s accosted by a woman who offers her soup, assuring her it’s not poisoned. The soup woman has a boyfriend at the base, could Edh—and a man, Edh’s commander, nips THAT conversation in the bud. This lieutenant then drives Edh into hostile territory and strands her there. But she fights her way out. The guy turns up later as the commander of her Black Crab assignment. Yikes! This character’s ultimate mettle and motivation is one of the factors contributing to the movie’s spills and chills.

So what about this mission, you ask. In this “time of the wolves,” as their recruiter, General Raad (David Dencik), puts it, there’s an ice-covered archipelago. At the end of which is a place where, if the team is successful, they will deliver two mysterious packages, which will spell victory for their side. (Specific countries are never named in this dystopic scenario, and the place-names that do come up are imaginary.) The snag is that the ice is too thin for auto vehicles to traverse, and sea passageways too narrow for an etc., etc.

I have to admit I laughed out loud when the recruiter said, “It could be navigated by soldiers with ice skates.” Okay! Then again, you know, in Anthony Mann’s 1965 “The Heroes of Telemark” the brave marauders led by Kirk Douglas and Richard Harris got to their Nazi target on skis, and that movie was based on a true story and is a stealth war-picture classic (as well as an influence on Christopher Nolan’s “Inception”), so why not? And sure enough, the sight of this hard-bitten half-dozen in silhouette, shushing across black stretches of ice, sometimes pausing to peer at the dozens of drowned corpses underneath them (climate change figures here because of course it does).

Edh points out early on that this is nothing more or less than a suicide mission, but she’s given reason to try to make it something else—the hope of being reunited with her daughter, who, she is told, was found in a refugee camp of sorts. Her longing sets up the flashbacks interspersed with the betrayal-filled, frequently gruesome, trek across the ice. During which the usual terrible secrets are revealed. War really is hell—on multiple levels. Especially when Edh finds herself faced with the inevitable Moral Choices.

Rapace, who I guess is now a reigning force in fantastic fare, delivers the stoic toughness (which of course will eventually crack) that’s by now a performance trademark for her. (This is the actress’ first Swedish film in ten years, and what a welcome home!) The effects are sometimes what you might call a little too convincing. The gloom is practically enveloping. But, in the end, is it really all about hope? “Black Crab” is more than sufficiently gripping to make you want to see it through and find out. 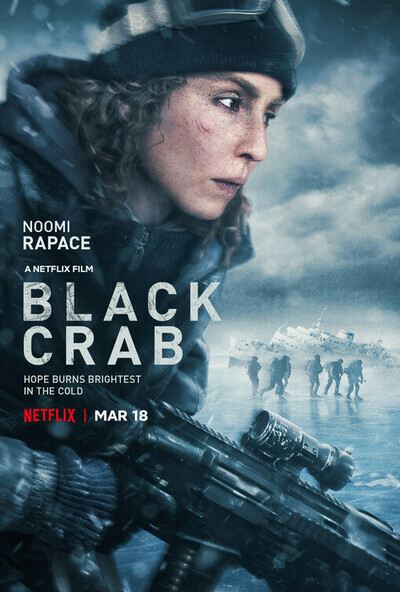