If movies were rated according to the importance of their subject matter, then George Mendeluk’s “Bitter Harvest,” which tells of the devastating famine Josef Stalin visited on the Ukraine in the 1930s, would deserve an unqualified four stars. If the same film were judged solely on its cinematic quality, though, it would barely merit one star. I’m giving it two here as a way of recognizing the interest of the historical horror it rather clumsily addresses.

As readers of Timothy D. Snyder’s magisterial study Bloodlands: Europe Between Hitler and Stalin will know, the two great European despots of the last century inflicted enormous suffering and staggering casualties not only on various populations but also on the nations that separated Germany and Russia. Yet even before Hitler’s armies swept across Poland, where it built many of the death camps that would be used in the slaughter of Europe’s Jews, Stalin had already set a high bar in the mass-murder department with his deliberate starvation of millions of Ukrainians.

The Nazis’ genocide, which came to be known as the Holocaust, has been treated in an endless stream of movies, both documentary and dramatic, as well as books, articles, TV shows and public commemorations and memorials across the West. Stalin’s crime in the Ukraine, now called the Holodomor, was never given similar attention and now is little-known outside the part of the world where it took place.

Without question, the Holodomor deserves examination, interrogation and commemoration. But it strikes me that the best place to start, cinema-wise, might be with a documentary that has the scope and power of Claude Lanzmann’s “Shoah.” Almost inevitably, approaching the subject via a standard-length dramatic feature risks reducing the cataclysm’s enormity to a trivializing size and emotional impact.

Unfortunately, “Bitter Harvest” can’t even claim the virtues of a superior dramatic feature. Born in Germany of Ukrainian descent, Mendeluk has spent most his career as a director of Canadian TV movies, which this film unsurprisingly resembles. Although its title recalls “Angry Harvest,” a brilliant Holocaust film, “Bitter Harvest” resembles no estimable European or American movie on such subjects as much as it does a lot of sub-par and instantly forgotten video attempts to plumb historical abominations.

Its narrative and visual approach almost suggests a compendium of the clichés one should avoid in a film like this. The first, which occupies the tale’s opening sections, might be called the cliché of the Happy Peasantry. In images that recall a Campbell’s soup commercial, we see the farm families of one Ukrainian village joyfully tilling their acres, harvesting their abundant crops and displaying their roomy, well-washed blouses and Cossack shirts; they are the descendants of proud warriors, we’re told, who venerate their noble traditions and Eastern Orthodox faith. Rather dubiously, it’s posited that their blissfully bucolic way of life continues through the Russian Revolution, the murder of the Czar’s family and Lenin’s regime. It’s only when Stalin ascends the Kremlin throne that storm clouds from the east come roaring in.

In this initial section, we also encounter the dual clichés of Hero as Sensitive Artist and Young Lovers Sundered. The peasant who loves to paint is the dreamily-handsome Yuri (Max Irons), whose favorite subject is the girl he’s had a crush on since childhood, Natalka (Samantha Barks). Here the film’s imagery recalls shampoo ads. Alas, though Yuri has been proclaiming his love for 15 or so years, Natalka still balks at marriage. Soon he’s persuaded to move to Kiev to study art, and the village he leaves behind is invaded by brutish Soviet troops, who show their hostility to religion by stealing devotional icons and roughing up the local priest.

In Kiev, Yuri studies under a modernist who urges him to emulate the Surrealists and big names like Picasso, and we know it’s trouble when this guy is replaced by an automaton demanding Socialist Realism. Life in the big city, meanwhile, increasingly becomes a political nightmare as Ukrainian Communist leaders, including friends of Yuri’s from back home, are liquidated and replaced by commissars from Russia.

Occasionally, the scene shifts to the Kremlin, where we see Stalin giving orders that he knows will kill millions. Ukraine is known as “the breadbasket of Europe,” and the Soviet leader wants its grain to feed his vast nation. But he’s also out to subdue the farming population into forced collectivization, and that entails leaving the farmers with less grain than they need to plant the next year’s crop, much less feed their families.

The cruelty of this campaign offers ample testament to the extraordinary evils of leftist totalitarianism, much as Auschwitz does to the rightist variety. But “Bitter Harvest” does little to advance its rhetorical case with scenes like the unintentionally silly one where the village’s Soviet commander begins flashing on his mother while trying to ravish Natalka (paging Dr. Freud!). Seriousness apart, though, there’s undeniable entertainment value in a number of scenes in which the magnificent Terence Stamp, as Yuri’s grandfather, displays his Cossack-fighting skills. If Grandpa had been able to go mano a mano with Stalin, no doubt this dark chapter in world history might’ve had a brighter ending. 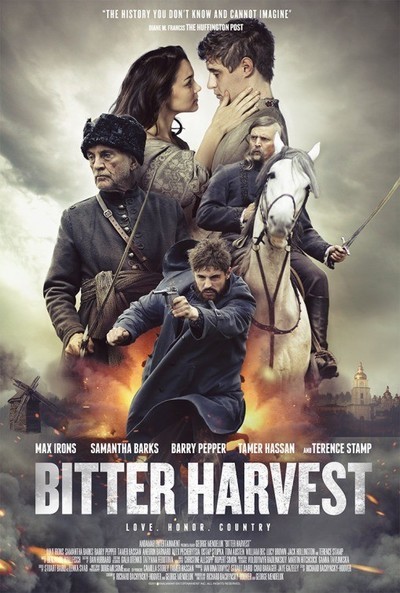