Birth of the Dragon

Writer and comedian Brian Huskey went on the comedy podcast “Hollywood Handbook” once and, with the hosts, adlibbed a fake screenplay called "Teen Pope." In it, a suburban skateboarder named Jason Attitude becomes Pope and indulges in every single hoary ‘80s party movie cliché. If you can picture such a film—all cliché, all terrible, tone-deaf *cool*, all horrifying tropes years beyond their sell-by date—then you can imagine George Nolfi's “Birth of the Dragon."

A preposterous screenwriting-for-dummies exercise directed with all the flare of a mid-‘90s tourism video, Nolfi decides the best way to get to know subjects Bruce Lee and his legendary one-time rival Wong Jack Man is through a bland white guy and his romantic troubles. You know ... the important stuff. Because who cares about two titanic forces of martial arts meeting to settle a mysterious score unless there's a constipated H&M catalog centerfold looking worried off to the side? How in the world are you supposed to know how to feel without constant cutaways to an anguished white face?

“Dragon” introduces Wong Jack Man (Yu Xia) fighting on behalf of the Shaolin order he represents. We'll later learn, the match goes awry when he nearly kills his opponent from the Tai Chi school (Wang Xi'An). He arrives in San Francisco a short while later to do penance for his poor performance in the match by doing dishes at his cousin's Chinese restaurant. It just so happens that Bruce Lee (Philip Ng) is there as well, teaching Kung Fu to Americans and Chinese alike. Lee, brimming with arrogance, assumes that the real reason Wong is in town is to challenge him on behalf of the martial arts masters he left behind in Hong Kong. Wong just wants to disappear but Lee wants to make a city-wide sensation of their match-up. Not helping matters is that their go-between, Steve McKee (Billy Magnussen), has gotten mixed up in Triad politics when he meets and falls for a waitress under the thumb of a local crime lord (Xing Jin). Can they put aside their differences to help love blossom, and learn a little something about themselves in the process?

Lee was rendered legendary several times over thanks to his popular action movies (which this film has the gall to make fun of), his prowess as an artist, his early death in the ‘70s, and the death of his only son, Brandon Lee, in the ‘90s. This film makes him a garden variety jerk in need of a quick personality tune-up, which Wong is happy to give him. Why you would want to take one of the only genuine superstars to which this country has ever played host and stuff him into a rote biopic is absolutely beyond me. Why Nolfi thought he was equal to the task of filming martial arts sequences worthy of Bruce Lee is an even greater mystery. His fight scenes play like expensive camera demos, showing off different frame rates and quickly changing aperture effects. I'm sure they look great on a motion-smoothing TV.

But wait, there's less! The score wastes no opportunity to hit every note too hard, from classically offensive "oriental" flute when introducing Asian characters, to hard charging electric guitar during fight scenes. The fashion and acting styles are all entirely too modern; no one involved with this movie is out to even pretend it takes place in 1964. A nameless henchman describes Lee's movies as "chopsocky," a term that wouldn't be coined for another 10 years. Lee wouldn't actually start making martial arts films in America for another six years, though this film has him directing them in the street with his students as extras. A Google search could have cleared up factual mistakes like that, but who has the time? The whole endeavor is marred by that sort of carelessness. Like the way Magnussen almost never takes off his (plainly modern) leather jacket as a way to save money finding him more period appropriate clothes to wear. There are also gags you see coming a mile away that the film wants you to get excited about, as if knowing joke structure is the same thing as writing a joke.

How, this far into the 21st century, does a film like this get made? One that shunts Bruce Lee to the status of secondary character in a lazy and boringly familiar star-crossed romance? There are entire books and countless articles about the Wong Jack Man & Bruce Lee fight, and this film invents things wholesale to pad its running time? Why? Who could possibly be expected to care about fictitious Steve McKee and his quest to save an equally fictitious love interest from a likely even more fictitious crime boss? Bruce Lee's films have never not been in hard cultural circulation in this country, but an entire movie about him is somehow going to add up to box office poison?

At one point, Wong warns Lee that "technique is a trap" and "style is a prison." The makers of “Birth of the Dragon” took that to heart. There's no style or technique to get imprisoned by here. I can think of no more fitting a send-off than what the great critic David Cairns wrote of the atrocious 2012 biopic “Hitchcock”: "It seems that the mediocre despise the talented and will bide their time until they can avenge themselves." 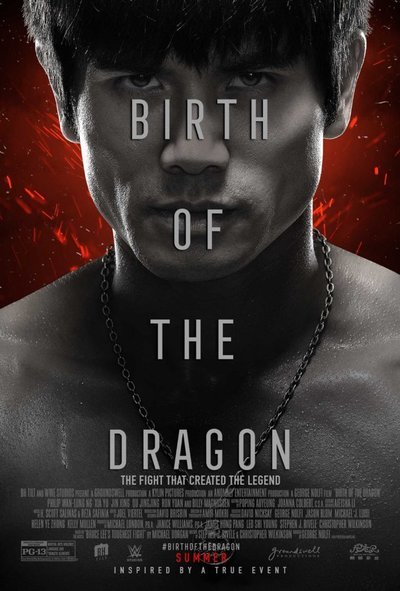 Writer (based on the article "Bruce Lee's Toughest Fight" by)