There will probably not be a single review of the Chinese animated epic “Big Fish & Begonia” that does not make reference to Japan’s Studio Ghibli and its most celebrated filmmaker, the world-renowned Hayao Miyazaki. With its lush visual style and a narrative that features both mythological and ecological underpinnings, the influence of Miyazaki on co-directors Xuan Liang and Chun Zhang can be felt in practically every frame. While the end result may not quite reach the heights that Miyazaki has regularly hit during his amazing career, it is nevertheless a worthy effort, filled with visuals that frequently dazzle the eye even if the story is more likely to inspiring the scratching of heads instead.

The film is set in the realm of The Others, a sort of parallel dimension that controls the seasons and tides on Earth and is where the souls of humans go after they pass—the good ones to be reborn as whales and the damned as the rats that scurry about in the underground. Travel between the two worlds can be accomplished via portals that appear under certain circumstances. When young people of The Others come of age, they utilize the passages to enter our world in the form of red dolphins to observe the laws of nature first-hand without making any contact with humans before returning back home seven days later. As the story opens, teenage girl Chun (Guanlin Ji) is taking her journey to Earth, and when she arrives, she sees a young fisherman (Timmy Xu) and is struck with a combination of curiosity and love at first sight. When Chun is preparing to head back home, she gets caught in a net and the boy jumps into the water in order to free her. He manages to let her go but tragically winds up drowning in the process.

After returning home, Chun is heartbroken and riddled with guilt over what happened and is determined to make amends. Eventually, she makes her way to the curious bureaucrat in charge of the souls that come there to rest. Chun pleads her case and is allowed to personally care for the soul of the young man, which will be transferred into a fish, until he is old enough to make his own journey back home. There are a couple of caveats to this deal, however. For starters, Chun is required to give up half of her own life as payment for the boy’s soul. For another, the lives of Chun and the fish, whom she dubs Kun, are now intertwined to the point where anything that happens to him will happen to her as well. Chun does her best to care for Kun, aided in her task by childhood friend Qui (Shangqing Su), but the unimagined commingling of the two worlds has unforeseen consequences that threaten the very existence of her world.

From a visual standpoint, “Big Fish & Begonia” is never less than breathtaking. Employing a combination of hand-drawn animation and CGI, Liang and Zhang present one stunning image after another, ranging from the opening sight of a vast school of whales swimming through the skies to the giant stuffed rat that houses a vast array of real rats that leave it to forage before sewing themselves back up inside. The realm of the others is especially evocative in the way that it suggests a land where anything is possible without ever going overboard into chaos and confusion. The imagery is so dreamy at times that you don’t so much watch it as become enveloped in it. This is one of those movies that, when it comes out on Blu-ray, viewers may find themselves just pausing to more fully drink in the wealth of detail and beauty on display at any given moment.

When it comes to actually telling the story at hand, Liang and Zhang prove to be somewhat less surefooted. On the one hand, they do manage the considerable achievements of telling a story where the main characters never exchange a single word between them and there is no formal villain to speak of to help spur things along. However, despite the seemingly bizarre nature of the story on the surface, it ends up suggesting any number of previous movies, ranging from Miyazaki’s own “Spirited Away” and “Ponyo” to the Studio Ghibli production “The Red Turtle” with even a dash of “The Shape of Water” thrown into the mix for good measure. Another problem is that while Miyazaki is able to spin his dramatically and emotionally complex narratives in a clean and straightforward manner, the storytelling here is not always as clear as it could be with enough wheel-spinning at times to make it feel as if it runs far longer than it actually does. (To be fair, however, there is the possibility that some of my confusion regarding the story may stem from my own admitted lack of knowledge towards Chinese mythology and that it may make more sense in the details to those who are more familiar with it.)

For the most part, however, “Big Fish & Begonia” is an entertaining spectacle that deserves to be seen on the big screen. Although muddled in certain respects, the basic story is gripping enough to entrance adults and kids (at least those old enough to read the subtitles) in equal measure and both will surely respond to the charm, excitement and visual invention on display throughout. 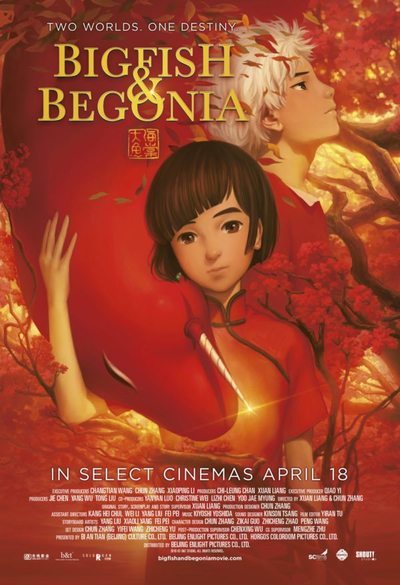