While Bettie Page is omnipresent in our culture, and everyone could pick her out of a lineup, she was also a famous recluse, who disappeared (almost totally) after her glory days in the 1950s. The 2005 film "The Notorious Bettie Page," starring Gretchen Mol, filled in some of the blanks (although apparently when Page saw the film at a screening, she shouted out, "Lies! It's all lies!"), but the woman herself remained staunchly hidden from view. Mark Mori's new documentary "Bettie Page Reveals All" features an extensive voiceover track of Bettie Page speaking, telling her own life story in all its sometimes joyous and sometimes harrowing detail. That voiceover track is the reason to see the film, which is mainly conventional in structure and sometimes sloppy in execution. But any time the film abandons the tired talking-head formula, with experts like Hugh Hefner and Dita Von Teese needlessly telling us why Page is influential, and goes back to Page talking, it finds its footing. She is an engaging guide, humorous and honest, cynical and wise, with that same sense of innocent joy in her own fame that translated into in photos.

There are some figures in our culture who reach such a level of mass appeal that the concept of over-saturation doesn't apply. These figures are few and far between: Elvis Presley, Marilyn Monroe, and I'd put Bettie Page on that list. It doesn't matter how many pictures one sees. There will always be desire for more. We can debate why that is, and we can debate whether or not she "deserves" to be lionized in this manner, but the fact remains that she's in the pantheon. In a way, her disappearing act was perfect, a gift to her fans. She wanted the fantasy she provided to remain intact.

While it's never made clear who Page is talking to, and the situation that prompted her to tell her story so near the end of her life, she takes us through her awkward childhood, baldly stating the facts. Her mother wanted a boy. Her father molested her. Obsessed with movie magazines and starlets, she and her sisters would pose for one another in the back yard, perfecting their smiles and postures. Traditional modeling was closed to her because she was declared "too hippy" (some things never change). After moving to New York she was approached by amateur camera clubs and mail-order magazine companies to do racy pin-up work. Page was a natural in this kind of material, and was a hit with the photographers as well as the men (and women) who bought it. Irving and Paula Klaw were important contacts: they ran mail-order magazines and helped engineer Page's rise to fame. Pin-up photographer Bunny Yaeger had a wonderful collaboration with Page, and helped get her the 1955 Playmate of the Month cover at Playboy.

Politicians looking to get elected took on pornography as a crusade, and the camera clubs and the Klaws found themselves under attack. There were FBI raids, and the Klaws were ordered to destroy their entire warehouse of photos. Paula Klaw, still with us today, says with a sly grin, "But I didn't destroy them all." It is due to Klaw's disobedience that we still have the multitudinous images of Bettie today. It was around that time that Page, then in her mid-30s, started to think it was time to be done with modeling. She left the business in 1957 and was not heard from for decades.

Bettie's description of what happened to her during those "lost years" is fascinating and awful. She was married a bunch of times, she found Jesus, she was diagnosed schizophrenic and spent 10 years in a mental institution, a harrowing ordeal. All of this is told to us by Page in a blasé honest tone, often followed by an almost rueful chuckle. When talking about one of her marriages, she said, "The only thing we had in common was movies, hamburgers, and making love." Her sense of humor about things may cloak some of the more horrible things she relates, like the sexual assault she endured from a group of guys in a car during her early days in New York.

Mori fills the screen with images of Page, both in still photographs and the 16 mm films she did, some seen here for the first time. He also uses cartoons, movie clips, newsreels, informational films, and travelogue photos to illustrate Page's various pit-stops along the way. It's all a bit cluttered, although sometimes quite funny. Choosing to illustrate Page's re-telling of being beaten by one of her husbands with cartoon fan-fic depicting the same event is a particularly low point. In the final third of the film, we really get into the talking-heads, who lecture us endlessly on Page's influence on modeling, Madonna, the renaissance of rockabilly and burlesque, and feminism. None of it can hold a candle to Page herself, who quietly dominates in her voiceover. Her authenticity still has great reverb.

During a photo shoot in the woods, cops arrested Page for "indecent exposure". She protested, not for being arrested, but for the wording of the charge. Her belief that there was nothing inherently "indecent" about nudity translates even in photos involving bondage and ball gags. This core of innocence is an essential part of her appeal.

One of the Camera Club photographers who flocked around Page to snap pictures on various New Jersey beaches said of her: "She projected. She came right out at you." Photographer Burt Glinn said a similar thing about Marilyn Monroe: "[She was] not photogenic in the accepted sense, the features were not memorable or special; what she had was the ability to project."

It is that ability to project that connects with an audience, far more than beauty ever could. It makes Bettie Page timeless. 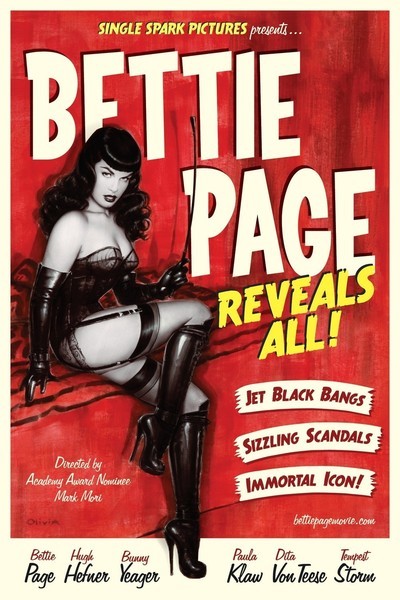 Bettie Page as Herself

Tempest Storm as Herself

Hugh Hefner as Himself

Dita Von Teese as Herself

Rebecca Romijn as Herself

Bunny Yeager as Herself

Mamie Van Doren as Herself