God bless Paul Verhoeven. The provocateur set his sights this year on classic Catholic imagery, subverting and challenging the structures of religion in his daring “Benedetta,” now playing in limited release after a controversial festival run. Is Verhoeven’s explicit sexualization of religion a shallow provocation, or a deep analysis of how implicit gender bias within institutions of faith only leads to violence and abuse? I’m honestly not entirely sure. There are times when Verhoeven is throwing so many ideas into his purposefully overcrowded screenplay that it starts to feel unfocused, like a dramatic version of the legendary "Aristocrats" joke. And yet there are also times when it feels like a culmination of his career, a film he was inevitably going to make in how it distills sexuality, corruption, broken systems, and provocation into one fascinating story. I’m not sure it all works, but there’s so much of it to consider and unpack and quite simply enjoy that it’s impossible to ignore. Paul Verhoeven doesn’t make movies that can be easily dismissed.

Benedetta Carlini was a real nun in the early 17th century in Pescia, a small village in Northern Italy. She reportedly had a relationship with one of her nuns while she was abbess of the Convent of the Mother of God, and she was stripped of her rank and imprisoned when the Papacy found out about it. She also reported having visions and even received the stigmata. In 1619, she claimed to have been visited by Jesus himself, who told Benedetta that she was to marry him. People started to question Benedetta’s proclamations, and the ensuing investigation revealed the forbidden relationship.

It would be an understatement to say that Verhoeven adapts this unusual tale, once recounted in a book by Judith C. Brown called Immodest Acts: The Life of a Lesbian Nun in Renaissance Italy, in a manner that only he could. He makes his fascination with the body and its functions evident early as two characters have a sort of romantic moment after defecating next to one another. It’s actually even earlier than that when a bird shits in a man’s eye and a stage show features a man lighting his farts. And yet it feels like no one should write all of this off as mere Verhoeven playfulness. There’s more to it. After all, as Benedetta is told, “Your worst enemy is your body.” This is a world in which the female body is seen as inherently sinful in all its needs and functions. Verhoeven seeks to explore that, placing that body on full display and leaning into carnal needs as filtered through religious iconography.

Virginie Efira is fearless as Benedetta, who is first introduced as a girl, being essentially sold to a convent run by an abbess played by the great Charlotte Rampling. Even as a child, her body is property, haggled to the convent for the right price. “Benedetta” then jumps forward 18 years as the title character starts to have visions of Jesus. Are these manifestations of Christ real or part of an act? The question of Benedetta’s motives hang in the air of the entire film almost like a mystery, but Verhoeven, at least to this viewer, seems more interested in what they reveal about the world around her than issues of her faith, particularly how those motivations effect the convent and and also vile men like The Nuncio, played by a sneering Lambert Wilson.

Of course, the issues of faith are contrasted against issues of carnality after the arrival of Bartolomea (Daphne Patakia), a young woman fleeing her abusive family. More worldly than the young woman raised in the convent, she becomes an object of desire for Benedetta, who is torn between her lust and her calling. Again, Verhoeven plays with physical extremes in scenes like the one where Benedetta forces Bartolomea to put her hands in boiling water or the one that involves, well, an object of pleasure shaped from a statue of the Virgin Mary. Of course, in one of many of Verhoeven’s playful touches, Benedetta says Jesus' name after her first orgasm. A character says that “Suffering is the only way to know Christ.” Verhoeven might question that statement.

After the sexual relationship develops and things literally start to go to Hell in and around the convent—there’s a comet and a plague, it's a lot of movie—“Benedetta” can start to feel a little shapeless. I started to wonder if it’s not meant to be taken less seriously than I did at first. Is it possible that Verhoeven is just the performer running from the skeletons of his faith on that stage, lighting his farts in their direction? That gray area between camp and commentary can be a difficult one to navigate, and I’m not sure “Benedetta” does so as well as some past Verhoeven works. One thing I do know—may God protect people like him who are willing to try. 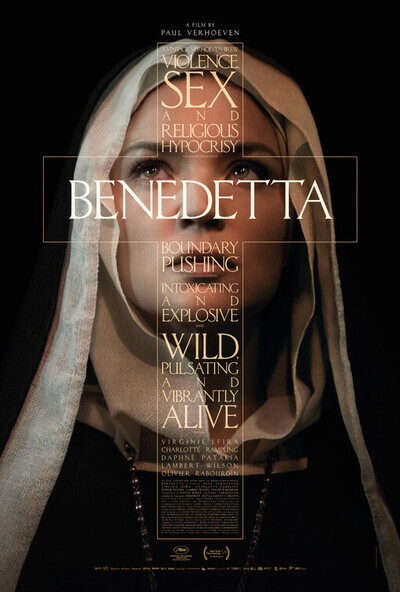