Beltracchi: The Art of Forgery

They would be perfect as the leads in a big-screen depiction of smirking charlatan Wolfgang Beltracchi and his striking wife, Helene, who are the subjects of the documentary “Beltracchi: The Art of Forgery.” This free-spirited German couple made headlines in 2010 after being arrested for pulling off one of the biggest art hoaxes in modern history. They collected millions of dollars from the sale of an estimated 300 bogus paintings that they passed off as found works by great European artists—the majority Expressionists and Surrealists—from the early 20th century.

As for this subtitled documentary, primarily in German but also French and English, it is somewhat out of date since it captures the prankster and his paramour as they are about to start serving their jail time a couple years back. Theirs was a strangely lenient sentence: they were allowed to work together in a photo studio during the day—in order to pay back those they hoodwinked—and then were imprisoned nightly. Both have since been released and are now mostly free. However, Beltracchi still faces lawsuits. And, these days, he can only make money by painting under his own name, a transition that he begins to grapple with at the end of the documentary.

The much-reported saga of the so-called Bonnie and Clyde of the art world, covered on TV by “60 Minutes,” in the pages of “Vanity Fair” and in two recent memoirs by the couple, is an indisputably fascinating one. For four decades, Beltracchi—a 64-year-old, straggly-haired hippie who looks like a dashing van Dyck nobleman gone to seed— made a hugely lucrative living out of creating not reproductions but high-quality original fakes done in the style of esteemed painters such as Fernand Leger, Max Ernst, Andre Derain, Max Pechstein and Georges Braque.

They were so well done that Ernst’s widow declared Beltracchi’s “The Forest,” a counterfeit bought by French media mogul Daniel Filipacchi for $7 million in 2006, as the most beautiful Ernst piece that she had ever seen.  Another false Ernst hung for months as part of a retrospective at the Museum of Modern Art in New York.

Not that any movie deal is necessarily in the works, although one senses the cash-strapped Beltracchis wouldn’t turn one down. But “The Art of Forgery’s” account of how a smugly confidant con man bamboozled seasoned connoisseurs who had a vested interest maintaining the ever-escalating price tags for fine art—auction houses Sotheby’s and Christie’s, world-class experts, gallery owners, museums and deep-pocket collectors—is certainly packed with “Catch Me If You Can” cinematic possibilities.

Actor and comedian Steve Martin is probably the most notable of Bertracchi’s victims. He was tricked into purchasing a supposed 1915 painting by Dutch-German artist Heinrich Campendonk with the title “Landscape with Horses” for about $850,000 from a Parisian gallery (he even had it authenticated by a Campendonk specialist) and later sold it through Christie’s at a hefty loss.

Like most collectors and experts who fell for Beltracchi’s chicanery, Martin understandably declined to participate in the documentary. There are rather neutral art critics and historians who pop up to provide some perspective on how and why the Beltracchis got away with their ruse for so long. Only Henrik Hanstein, the scowling owner of Cologne-based auction house Lempertz, injects some sorely needed vitriol on behalf of those who were humiliated and had their reputations sullied as he bluntly states, “I was damn angry at Mr. Beltracchi.”

But too often “The Art of Forgery” turns into a how-to guide, initially interesting but ultimately belabored, with Beltracchi meticulously deconstructing the methods he employed to pass off his new art as old, from reusing period-correct frames and canvases bought at flea markets to tucking pieces of dust and dirt into the back of his paintings. It’s like watching a magician reveal his secrets, which is usually less fun than watching him pull a rabbit out of his hat.

Most galling if impressive is the fib that he and Helene concocted to ensure buyers of their legitimacy: That she inherited an art collection from her then-recently deceased grandfather who had bought these pieces from a real-life gallery owner before World War II and hid them to keep them safe from the Nazis. Given the raw emotions involved, no one thought to question the tale’s veracity.

At a certain point, however, there arrives a sense that this documentary is, in large part, a blatant act of self-mythologizing, a way to embolden Beltracchi’s outlaw genius status after being duly chastened and celebrate his knack for taking advantage of other people’s greed while feeding his own. If he has any remorse, he has probably painted over it. To him, the auction houses and dealers are no less culpable. They let him fool them because they benefited from believing. Besides, how can you not be slightly skeptical of the film’s intent after learning that “The Art of Forgery’s“ director Arne Birkenstock is the son of Beltracchi’s lawyer?

But there is one highly genuine scene that feels as if it could be an outtake from “The Grand Budapest Hotel“ that nicely underlines Birkenstock’s theme of the ephemeral nature of art when it comes authenticity and originality.

Madame and Monsieur Ommeslaghe, a prim silver-haired French couple of means, invite the camera into their tastefully appointed home. He shows off his Warhol, Renoir and Matisse before coming upon a Magritte seascape featuring a female nude in muted tones with a white dove on her shoulder. The lady of the house notes that it is “not as nice” as the phony Campendonk done by Beltracchi that once occupied the wall. She loved its bright colors and how the cow and farm homes summoned warm memories of her rural childhood. Declaring it a “poisoned gift” from her husband that they eventually returned after learning of its illegitimate origins, she no longer considers it art. Instead, it’s “a decoration.”

Yet, the painting remains beautiful, no matter how it came to be or how much it is worth. And she clearly misses it. Should the fact that it is not a Campendonk matter? If it gives you pleasure, isn’t that more important than whose signature is on the bottom? When “The Art of Forgery” considers such thought-provoking matters, that is when it feels most real. 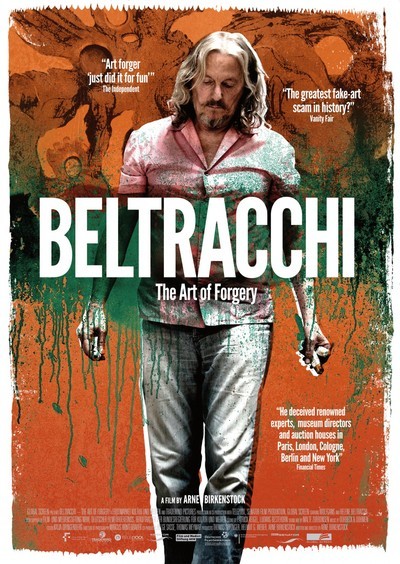 Wolfgang Beltracchi as Himself

Helene Beltracchi as Herself