Frank (Jim Gaffigan) is overly focused on what he perceives to be the failings of his teenage son Philip (Logan Miller). You don't blame Philip for wanting to go to NYU to get as far away from his dad as possible. Frank's job takes him to Japan for weeks at a time, and when he's home, he's cranky with his long-suffering wife (Anna Gunn), indifferent to his young daughter (Emerson Tate Alexander), and obsessed with Philip's shortcomings. The opening sequences of Miranda Bailey's "Being Frank" unfold like a very unpleasant episode of Leave It to Beaver, only set in 1992, with Clinton/Gore posters everywhere. The unpleasantness serves a purpose when Philip discovers Frank's secret life: his father has another family, a "wife" and two teenage kids, in a nearby town. Frank has been racing back and forth between his two families, manufacturing "trips to Japan for work" to cover his absences. The setup (script by Glen Lakin) is full of wacko screwball potential, some of which is mined, some of which misses the boat.

Through lying and subterfuge, Philip infiltrates the second family, and Frank, busted after 19 years of living a double life, tries to get his extremely alienated son on his side. Philip looks on in pained disbelief at how different his dad is in this other context. Frank is loving with his other wife (Samantha Mathis), proud of his jock son Eddie (Gage Polchlopek), and respectful of the independence of his daughter Kelly (Isabelle Phillips). This second family got the good Frank, whereas Philip's family suffered under the worst. Mathis' character is the antithesis of poor Anna Gunn's unhappy put-upon character. Mathis gives a really fun and subtle performance as a woman madly in love with her husband, wearing hippie bohemian clothes (all flowing angel sleeves and long pendant necklaces), flitting about happily and supportively. Two of Mathis' line readings ("Thank you for your support" and "I am so MAD at him") are a reminder of how good she is, how great it is to see her in things.

As Frank's two separate worlds converge, hijinx ensue. Kelly develops a crush on Philip, which is extremely awkward for everyone (except Kelly). Philip's best friend Lewis (Daniel Rashid) ropes in his pothead uncle (Alex Karpovsky, in an extremely obnoxious performance) to pose as Philip's dad (for reasons too complex to go into). Frank runs back and forth between his families, lying to literally everyone, with Philip racing behind him, or ahead of him, morphing from angry victim to accomplice. This switch makes little sense, and deflates much of the comedic propulsion of the story. Miller is a very good young actor, with an open and natural manner. His sense of grievance feels real from the jump. Being ignored by your dad, not feeling loved by your dad, is not going to vanish because your dad takes you fishing one time. There's no acknowledgement from Frank that he has openly loved the jock son and only criticized the non-jock son, and how painful it must have been for Philip to be rejected all these years. Frank never admits wrongdoing. Frank has no explanation for his behavior beyond, "I love all of you. What else was I supposed to do?"

Don't get me wrong. This is fine, and it's also a very funny choice. 1930s screwballs were filled with selfish people racing around trying to get their needs met, hang the consequences. It's cathartic. This feeling is there in "Being Frank" when Frank is allowed to be his selfish clueless self, hurtling between homes and behaving so much like a madman that everyone stares in shock when he enters a room. The more he tries to act like things are normal, the weirder his behavior gets. He loses control of his lies. At one point, during a picnic in a park, he ends up racing towards one of his daughters, screaming "Ahhhhhhh!" at the top of his lungs, and you know why he is doing it, but his kids don't, his wives don't, and they all think he has lost his mind. This is William Powell territory. What's funny is when someone lies, and then is forced to maintain the lie, even though they know it makes them look insane. Even funnier is the attempt to project "everything's normal, everything's fine." Gaffigan is very funny as the man looking around at all the chaos, as though he wasn't the one who caused it. Mathis, Gunn, the whole cast, understand this aspect of it really well, as does Bailey. Bailey has a long track record of producing excellent and sometimes very challenging films ("The Squid and the Whale", "The Diary of a Teenage Girl", "Swiss Army Man", "Don't Think Twice"). She's also the co-founder of Cherry Picks, a new media site highlighting female writers.  She's directed two documentaries (2010's "Greenlit" and 2017's "The Pathological Optimist") and "Being Frank" is her first narrative feature.

When "Being Frank" goes squishy and sentimental, it loses its nerve. Lakin's script is funny, and there are many non-stereotypical choices. Lewis has a secret, and his friendship with Philip turns out to have some real depth. Eddie is not the stereotypical jock-jerk (such a tired trope) but a sweet kid with daddy issues of his own. Miller makes everything real, whether he's running down a sidewalk or trying to look cool for the girl he's been crushing on. The screwball spirit is a tough one. Tough as nails. Screwball sees the world as absurd, screwball scoffs at sentiment and views peace as something inherently temporary. "Bringing Up Baby" may end with the couple getting together, but she destroys his life's work in the process. It probably won't be the last time. "Being Frank" could have used a little bit more of that tough screwball spirit. 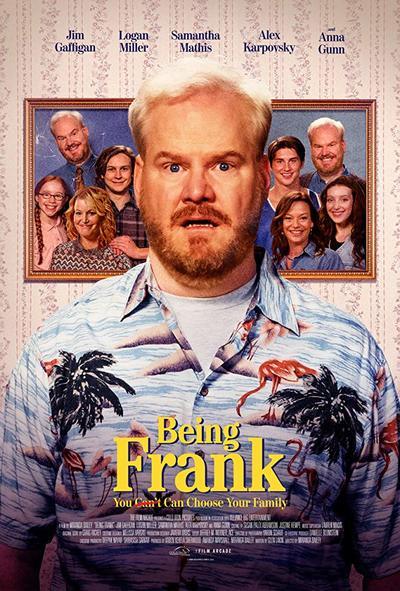