The annals of show business history are filled with stories of people who had stardom in their grasp and then lost it all due to any number of reasons ranging from the tragic to the ironic to the downright bewildering. However, few of these stories can top that of George Lazenby, the Australian-born former male model who in 1969 leapt from total obscurity to international stardom when, despite never having done any acting in his life, was tapped to perform the seemingly impossible task of taking over the role of James Bond from Sean Connery in “On Her Majesty’s Secret Service,” only to then decline to do any more, making himself the only actor to play the role only once, not counting any of the performers in the 1967 spoof “Casino Royale.” That decision launched him right back into obscurity, made him an instant pop culture footnote/punchline and continues to make people wonder what he could have been thinking by tossing away instant fame and fortune like that. In the documentary/biopic hybrid “Becoming Bond,” Lazenby himself takes center stage to tell his story and explain his actions at last but the end result is a sometimes frustrating work that takes a potentially fascinating tale and renders it mostly inert thanks in large part to its questionable approach to the material.

Lazenby, looking hale and hearty at 77 and far more at ease in front of a movie camera than he did as Bond, serves as the on-camera narrator as he offers a guided tour through his entire life, beginning as a young boy in Australia with a illness that left him with half a kidney and doctors predicting that he would not live past 12. Obviously he did and then went on to discover the joys of the fairer sex, eventually falling madly in love with Belinda, the daughter of a prominent family who did not approve of their daughter seeing a mere car salesman. When she left to spend several months in London, he eventually followed her there and this led to him stumbling into a second successful career as a male model, though his roving eye finally costs him the love of Belinda. Then comes a chance encounter with a socialite who recommends that he audition for the role of James Bond recently vacated by its originator. Since he had no acting experience, representation or membership in the union, getting an audition was impossible but thanks to a combination of nerve, bluster and the acquisition of a suit originally ordered, but never claimed, by Connery himself, he managed to overcome astronomical odds and landed the part.

This all sounds interesting but writer/director Josh Greenbaum has made a couple of inexplicable artistic decisions that all but bring the film to its knees. The first problem, perhaps inevitable, is that since there obviously were not cameras rolling on Lazenby during his formative years, it intersperses scenes of the real Lazenby sitting and recounting his tale with dramatic recreations of the key moments featuring Josh Lawson as Lazenby, Kassandra Clementi as the beloved Belinda and former Bond Girl Jane Seymour as the socialite who changes his life. The juxtaposition of the two approaches is ambitious enough but it never quite pulls together and most people will find themselves wishing that Greenbaum had just stuck with one or the other. This is especially glaring because there is precious little connect between the real Lazenby and his screen iteration, at least in part because Lawson seems like he is doing more of an impression of Sharlto Copely than anything else.

The second, and bigger, problem is that “Becoming Bond” is so enamored with Lazenby’s recollection of his formative years—which even Greenbaum himself questions the truthfulness of at one point—that nearly an hour goes by before he goes after the part of James Bond, an almost fatal decision for a film that only clocks in at a mere 95 minutes. And when it gets to the only stuff that most viewers are interested in and when it does, it winds up rushing through that material. To make matters worse, the Bond-related material is not especially illuminating—we see him goofing off on the set, sleeping his way through the cast and angering co-producer Harry Saltzman (Jeff Garlin) by refusing to sign a seven-film contract (complete with a million dollar bonus) and by doing publicity for the movie while sporting a decidedly un-Bond-like beard—but we never get much of an inkling as to what is going on in his mind. By the time he is having an epiphany during an interview with Johnny Carson (played distractingly by Dana Carvey) that leads him to officially spit the bit on future Bond films, I was as frustrated with watching the screen version of him as Saltzman and partner Albert Broccoli (who never mentioned once throughout) must have been with the real one. This also means that Lazenby’s post-Bond career is completely ignored—while the film leaves the impression that he never acted again, he did in fact appear in a number of films over the years—the best of which was probably his effective supporting turn in Peter Bogdanovich’s underrated “Saint Jack” (1979)—and even spoofed Bond in a number of them.

“Becoming Bond” is a film that doesn’t seem to know what kind of audience it is aiming for. Bond fanatics will grow impatient with the lack of material about “On Her Majesty’s Secret Service,” especially considering that it is now generally regarded as one of the very best of all the Bond films (if only because the producers, knowing they would not be able to rely on Connery’s charm, covered themselves with a stronger-than-usual screenplay and one of the best female leads of the entire series in Diana Rigg). Those with no particular fascination with the subject will find little to pique their interest. There is a potentially interesting film—documentary or fiction—in Lazenby’s life and career (especially one focusing on the post-Bond years and dealing with the ramifications of his seemingly unfathomable decision) but “Becoming Bond,” despite its ambitions, is not it. Your time will be much better spent rewatching “On Her Majesty’s Secret Service” and realizing that not only is it arguably the best Bond film of all (and if Connery had been in it, it would not even be up for discussion) but that Lazenby, for all the derision he has received at the time and over the years, is not that bad in it. 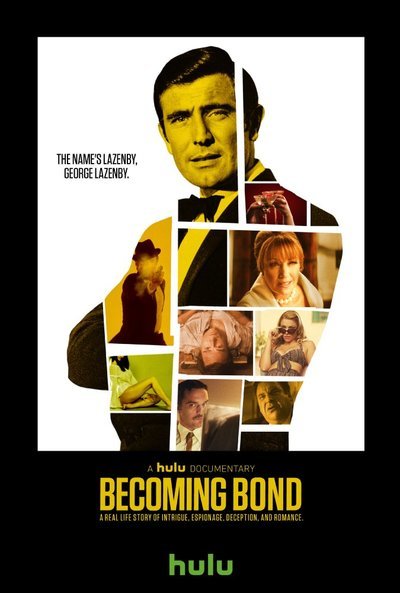 George Lazenby as Himself