Most of us know couples who seem to barely tolerate one another; who roll their eyes while their partner is talking; who simmer with low-level contempt for one another and don't bother to hide it. Whatever valid reason there may be for turning the relationship sour, couples like this are a huge bore. Anna (Zoe Lister-Jones) and Ben (Adam Pally) in "Band Aid" are that kind of couple. They show up at events carrying their thunder-cloud with them.

One day, at a kids' birthday party, Anna and Ben pick up a plastic microphone and make up a song on the spot, poking fun at themselves and their fights. A small space of communication opens up and they decide to start a band. This is the premise of "Band Aid," written, directed, and produced by Lister-Jones, who also wrote all of the songs performed by the couple in the film. Lister-Jones is the very definition of a "phenom," and if the film sometimes falls back on cliché, there's enough charm and interest here—particularly in the chemistry between the two leads—to keep it afloat.

"Band Aid" is the story of two disappointed, stuck people who get re-inspired through creating music together. Anna had a book deal once, but it fell through. Now she makes money as an Uber driver. Ben is a freelance artist who designs corporate logos, but really, though, all he does is lie on the couch, smoke weed, and watch television. Their relationship is not on autopilot so much as it has descended into a constant state of increasingly toxic bickering. Their couples therapist informs them that she's moving to Canada, her tone suggesting that the move may be to get away from them.

Collaborating requires communication. In the space of songwriting, Anna and Ben find their fights absurd, even entertaining. In that space, they can say anything to each other. All of it is grist for the mill. They rope in their neighbor Dave (Fred Armisen) to be their drummer. He's an extremely strange man (practically the Platonic Ideal of the "weird neighbor" sitcom cliché) but game for the task of keeping the beat for the two maniacs onstage in front of him. Performing at open mic nights creates a sense of togetherness in Anna and Ben in a way that couples therapy never did. Lister-Jones' songs are punk-rock and grunge inspired, with snarky lyrics, screaming choruses, simple chord changes. Pally and Lister-Jones seem to get a legitimate kick out of one another during their duets, and the characters experience a catharsis like no other when they sing together. Lister-Jones celebrates the wild free-fall of that creative space, the embracing of the unknown, saying "Yes" to new experiences, the terror of the blank page. Like the wonderful film "Music and Lyrics," "Band Aid" shows how creative collaboration—a shared project, something to DO together besides just being a couple—is a great basis for a relationship. Hell, it worked for Richard and Linda Thompson. (Briefly, anyway.)

"Band Aid" is quite insightful in its observations about the expectations that marriage imposes on couples (couples who buy the conventional lie, that is). You'd think two bohemian types like Anna and Ben could resist succumbing to phony roles such as "husband," "wife," "breadwinner," etc., but no. The institution is too strong. The frustration of the film (possibly inadvertent) is watching two people so readily buy into a life that does not suit them at all.

Lister-Jones and Pally have a free-wheeling improvisational chemistry that anchors the film and saves it from sentimentality. In their hands, both Anna and Ben are clearly funny people, even when they're saying terrible things. Pally was so great in a similar two-hander, 2015's "Night Owls," a film that also relied on his ability to listen and react, to create a comedic context for the sometimes extremely serious events in the film. That's a hard line to walk and he does it beautifully. He's wonderful at suggesting that Ben's bratty behavior comes from Ben's baffled response to the Gloomy Gus his wife has become. He doesn't know what to do and so he "checks out." And Lister-Jones' performance illuminates—in every pause, every barb, every scowl—that this is a woman who has not dealt with her traumas and disappointments (real and perceived) in any meaningful way. Pally and Lister-Jones have a "riff" dynamic, energy sparking up and deflating, exploding, subsiding, one-liners—funny and cruel—careening out of their mouths.

"Band Aid" deals with some pretty serious topics, but it doesn't have the raw-wound quality of films like "Blue Valentine" or "The Break-Up," two movies that also present the wreckage left behind when love departs the scene. "Band Aid" is mostly interested in what happens when two unhappy people sit down with pen and paper and try to create something out of nothing. 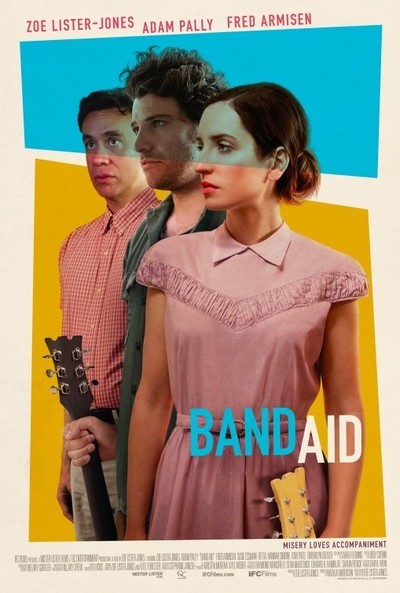